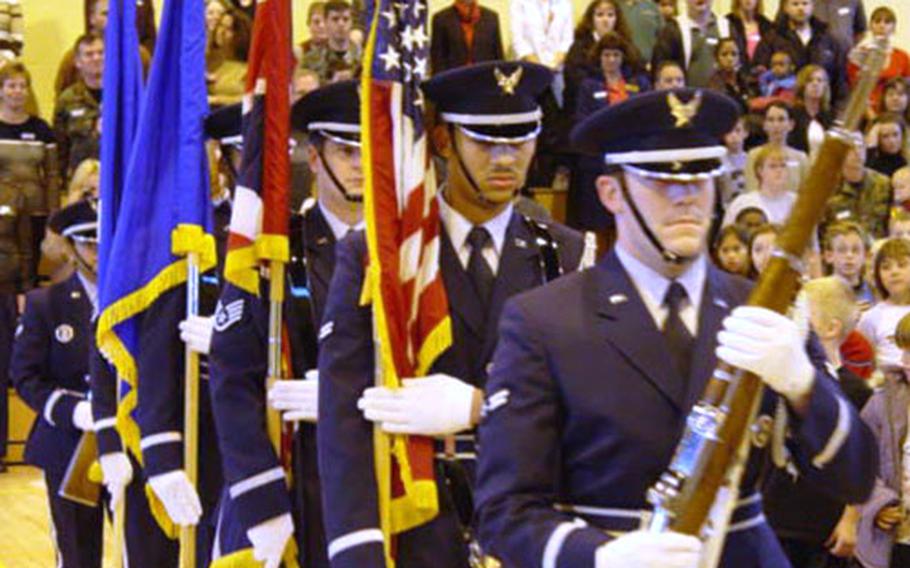 The Liberty Wing Ambassadors in Blue Honor Guard from RAF Lakenheath, England, carries the U.S. and British flags across the floor of the gymnasium at Lakenheath Elementay School during a ceremony Monday in honor of British Remembrance Day and U.S. Veterans Day. (Courtesy of DODDS Europe)

The Liberty Wing Ambassadors in Blue Honor Guard from RAF Lakenheath, England, carries the U.S. and British flags across the floor of the gymnasium at Lakenheath Elementay School during a ceremony Monday in honor of British Remembrance Day and U.S. Veterans Day. (Courtesy of DODDS Europe) 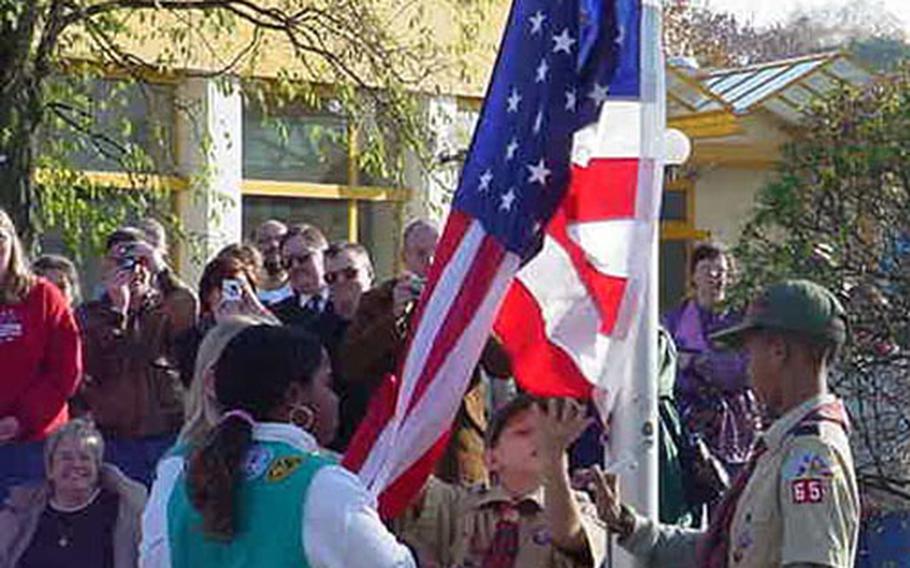 On Tuesday, students have a day off from school.

On Monday they learned why.

&#8220;We hope the children will have a better understanding of what the patriotic holidays are all about,&#8221; said De De Brown-Johnson, a first-grade teacher at Lakenheath Elementary School in England, after more than 800 youngsters sang songs and learned about Veterans Day and its British equivalent, Remembrance Day.

The students sang, &#8220;You&#8217;re a Grand Old Flag&#8221; and performed sign language while singing two other songs. Then, Brig. Gen. Mark T. Matthews, commander of the 48th Fighter Wing, showed the kids pictures of his family members who are veterans.

Students from throughout Europe participated in other activities to honor the occasion.

Fifth-graders at Darmstadt Elementary School in Germany wanted a flagpole for their school and the local base commander obliged. The pole was erected at the beginning of the school year.

&#8220;Then the class and I talked about it and decided we needed to get some really nice flags,&#8221; said Lisa Pinaula, a fifth-grade social studies teacher at Darmstadt.

&#8220;We got a flag that was flown over the Capitol building on the Fourth of July [2003]. The flag came with a plaque saying it was for the members of Darmstadt&#8217;s military community and the sacrifices they make for freedom.&#8221;

On Monday, the students dedicated the flagpole and ran a new flag up the pole.

The kids also wrote letters to veterans and talked about veterans, then put together a script for Monday&#8217;s 30-minute ceremony.

The 233rd Base Support Battalion, based in Darmstadt, then hosted a reception with cookies, juice and a cake with a flag and the Pledge of Allegiance on it.

&#8220;We spoke about the origin of Veterans Day and different ways the kids could pay reverence to it,&#8221; Palmer said. &#8220;We wanted to give them different ideas instead of it being just another day off from school.&#8221;

Some suggestions &#8212; sitting down and writing a letter, asking people on base if they are veterans and thanking them, and setting watches for 11:11 a.m. on Tuesday, then taking a moment to think about veterans.

Palmer said about half of her students have parents who are deployed in Iraq.

&#8220;Sometimes military kids are so inundated in the military because they live it,&#8221; Palmer said. &#8220;They need to stop and think about people who came before.

Palmer said Segers emphasized that veterans status is not given to just those who served in a war. Some might not have done anything spectacular, but they did their job.

Students at other schools in Europe also marked the occasion with special events.

&#8226; For the sixth year, Junior ROTC from Vicenza High School in Italy went to the Veterans Day Ceremony at the Rhone American Military Cemetery in Draguignan, France.

&#8220;They find out that things are done differently by the French. This is really an eye-opener for the younger ones, because they&#8217;re really interacting with the group down there to pull this ceremony off.&#8221;

&#8226; At Ramstein American High School in Germany, cadets will join veterans on Tuesday to sell poppies at the base exchange. The money raised will be used to help disabled veterans.

Shaina Guillory wrote: &#8220;Old gloomy man standing with medals, How do you feel about when you were in the Army? I wish you could be rewarded for your bravery. I will never forget you, sir.&#8221;