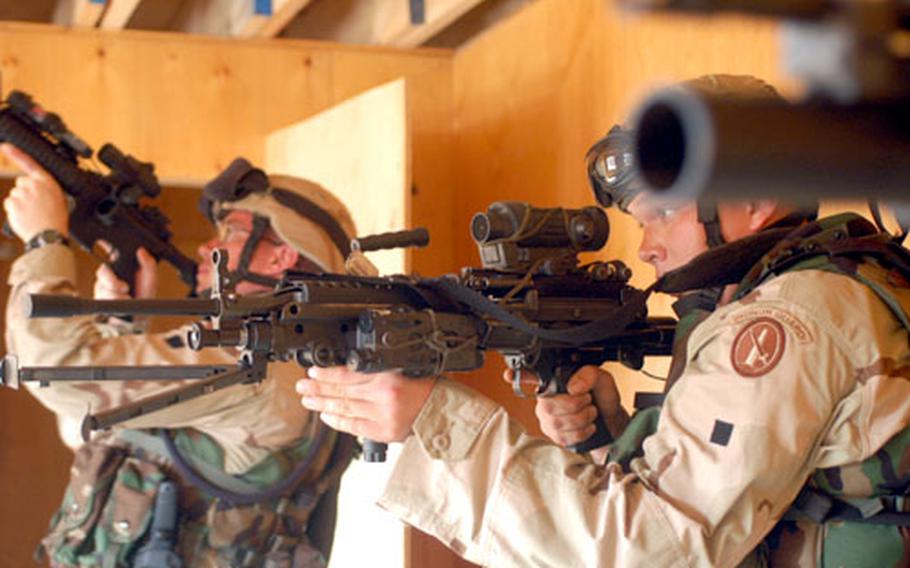 Spc. Jeremy Brown, 22, a SAW gunner from Broken Arrow, Okla., left, and Spc. Charles Ellett, 22, a rifleman from Riverton, Utah, clear a room for possible enemies during Movement on Urban Terrain training with other members of the Old Guard deployed to Camp Lemonier in Djibouti. (Kendra Helmer / S&S)

Spc. Jeremy Brown, 22, a SAW gunner from Broken Arrow, Okla., left, and Spc. Charles Ellett, 22, a rifleman from Riverton, Utah, clear a room for possible enemies during Movement on Urban Terrain training with other members of the Old Guard deployed to Camp Lemonier in Djibouti. (Kendra Helmer / S&S) 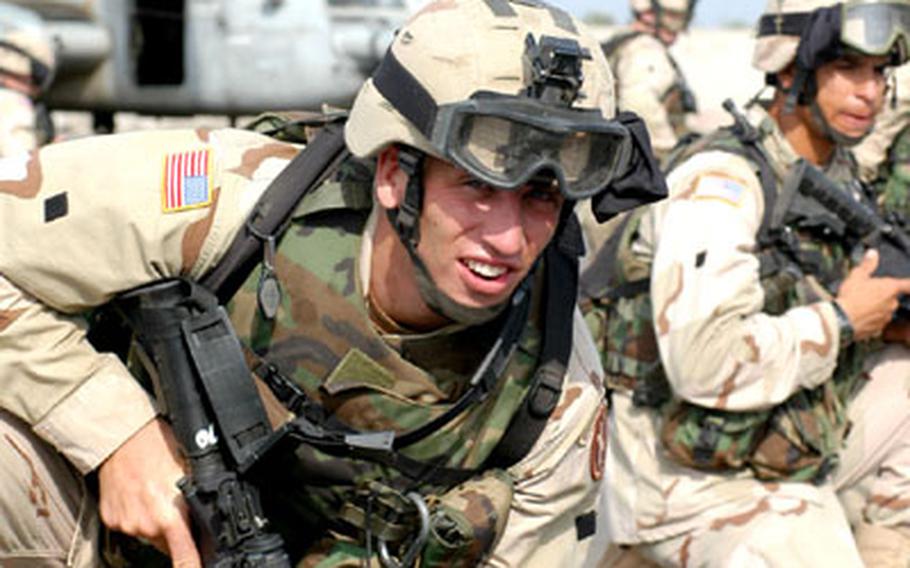 Army Spc. Matthew Lemon, 24, from Cincinnati, and other members of the Old Guard prepare to run into a helicopter during TRAP training in Djibouti. (Kendra Helmer / S&S) 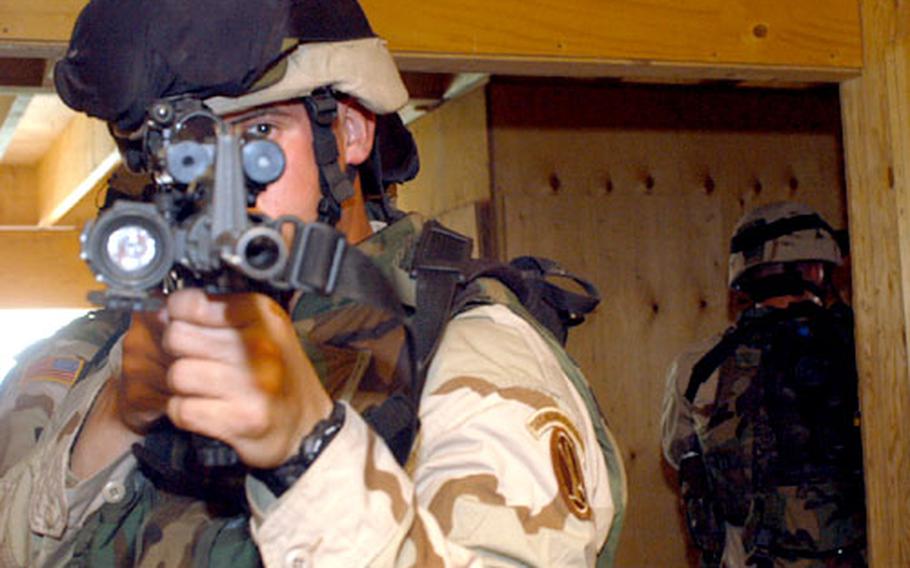 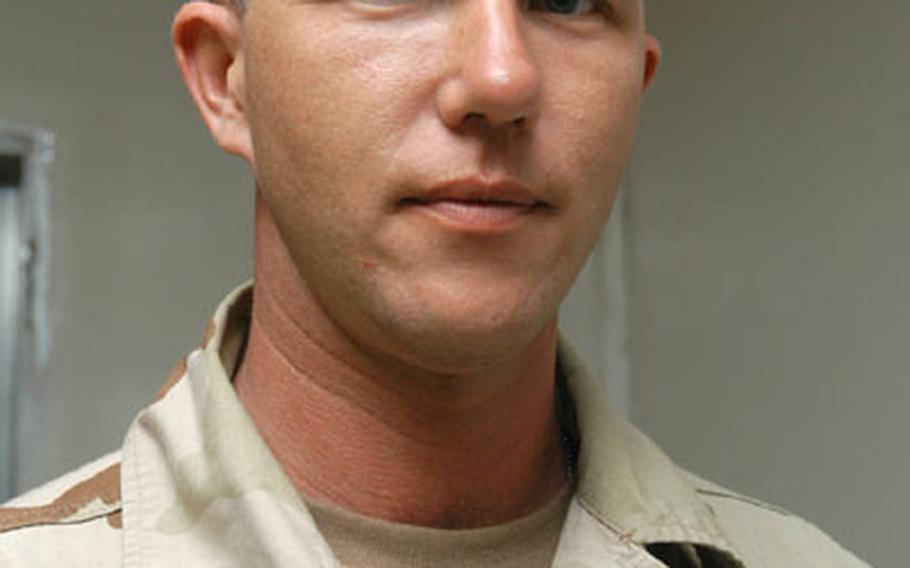 CAMP LEMONIER, Djibouti &#8212; As a sentinel at the Tomb of the Unknowns, Staff Sgt. Michael Wilson often was thanked by politicians for doing his job to perfection.

As he took 21 steps across the 63-foot walkway and paused before the tomb in Arlington National Cemetery, he thought about the sacrifices others made.

Wilson and about 150 other soldiers with the 3rd U.S. Infantry Regiment (The Old Guard) donned desert camouflage for duty in the Horn of Africa. It is the first time since the Vietnam War that the Army&#8217;s most celebrated ceremonial unit deployed.

The infantrymen arrived Dec. 17 at Camp Lemonier near the city of Djibouti in Djibouti, a tiny country bordering Somalia. The 88-acre camp is headquarters for Combined Joint Task Force&#8212;Horn of Africa, which has overseen counterterrorism operations in the region for U.S. Central Command since December 2002.

Most of the infantrymen deployed to the region are with Company B, a light infantry rifle company that typically defends the Washington, D.C., area. The company also provides guards, casket teams and firing party elements for military funerals in Arlington.

Their mission in the Horn of Africa includes pulling security for civil affairs projects and training with foreign militaries, &#8220;making sure they ... help us and help themselves in preventing terrorist networks from operating,&#8221; said Capt. Michael J. Trotter, Company B commander.

Some said the deployment was a shock for their families, who know all too well the dangers faced by troops supporting the war on terrorism.

Spc. Anthony Garcia, a rifleman, has participated in countless casket-duty missions since Sept. 11, 2001, as fallen soldiers were brought home from Afghanistan and Iraq.

Spc. George Meacham waited a couple of weeks before telling his pregnant wife that he was going to Africa. And while he missed his son&#8217;s Jan. 23 birth, he said he was proud to be among the first Old Guard soldiers to deploy in three decades.

The Fort Myer, Va.-based soldiers had much to do to prepare, from getting desert combat uniforms to undergoing three months of intense training at Fort A.P. Hill, Va., and Fort Polk, La. They trained in areas such as urban military operations and convoy security.

The men were issued millions of dollars in new gear, including lighter, padded, advanced combat helmets and M-4 carbines with advanced optics.

Several of the infantrymen, including those from other companies, volunteered for the overseas duty. Others said that while they welcomed the change in duty, their expected six-month deployment would be long enough.

The soldiers, including Pfc. Peter Gerstein, have trained with Djibouti&#8217;s Rapid Reaction Force and Republican Guard.

While most of the soldiers are in Djibouti, some work in rural Ethiopia at Camp United, a training facility they established.

Trotter said he couldn&#8217;t specify which other countries his men have gone into, though he did acknowledge his soldiers have participated in covert missions.

When not performing those tasks or pulling security, the soldiers stay busy training.

&#8220;We still do the things that every other rifle company does in the Army,&#8221; said Trotter, noting that people sometimes have misconceptions about The Old Guard based on its Arlington missions. The Old Guard is primarily a tactical unit. Its soldiers were among the first to respond to the Sept. 11, 2001, attack at the Pentagon.