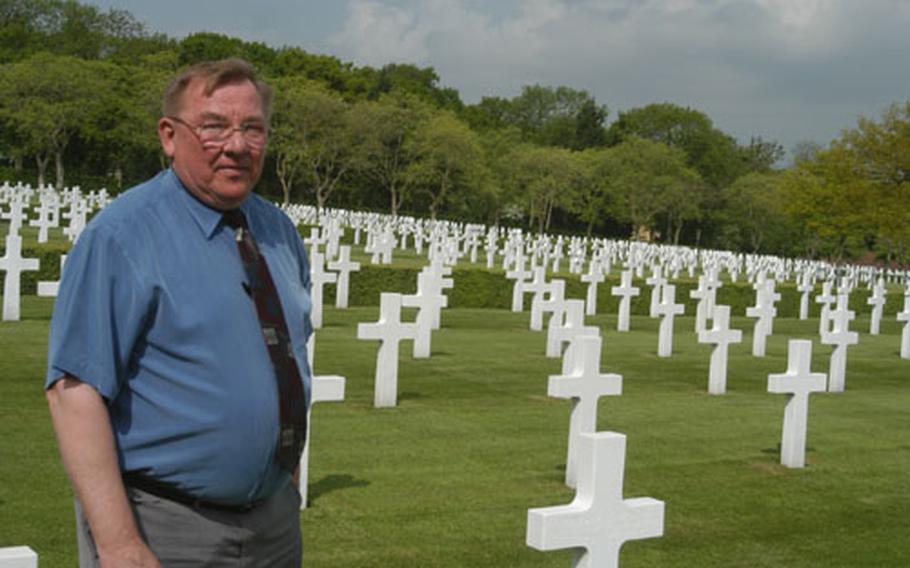 Memorial Day is the biggest day of the year for Jim Schoenecker. He is superintendent of the Cambridge American Cemetery in England, where more than 3,800 Americans are buried. (Ron Jensen / S&S)

MADINGLEY, England &#8212; Jim Schoenecker, who served his country in uniform for 10 years and cared for those who made the ultimate sacrifice for more than 20 years, has retired.

Schoenecker, 64, will return to his native Pittsburgh area this week after more than 40 years overseas, most recently as superintendent of the American Military Cemetery near Cambridge.

He is well-known to veterans and active-duty personnel alike who have visited the cemetery for ceremonies on Memorial Day or Veterans Day or have simply stopped by on any other day of the year. The Memorial Day service annually attracts hundreds of people who pay respects to those who died in America&#8217;s wars.

Schoenecker arrived in France in 1958 as a young soldier in the U.S. Army and was still there in 1966 when French President Charles de Gaulle asked the U.S. military to leave. Schoenecker watched at a base near Verdun when Old Glory was lowered for the final time.

He stayed in France after his military service and was eventually hired by the American Battle Monuments Commission in 1981. He served at four cemeteries in France and one in the Netherlands before arriving at Cambridge in 1990.

The commission looks after more than 20 cemeteries throughout Europe where America&#8217;s dead from World War I and World War II are buried. Family members had the option after each war of having the body of their loved one returned to America or left in a plot surrounded by those who also fell during the war.

Schoenecker has often said it is an honor to care for the men and women buried beneath the pure white crosses and Stars of David.