Buy Photo
Robin Williams joined Kid Rock on stage at the end of the USO show at Aviano Air Base, Italy, in Dec. 2007 to play the harmonica and use some of his famous improvisational skills to make up lyrics to a song the two were playing. (Kent Harris/Stars and Stripes)

Buy Photo
Robin Williams joined Kid Rock on stage at the end of the USO show at Aviano Air Base, Italy, in Dec. 2007 to play the harmonica and use some of his famous improvisational skills to make up lyrics to a song the two were playing. (Kent Harris/Stars and Stripes) After a week performing for servicemembers downrange, comedian Lewis Black had a challenging time trying to tone down his act for families at Aviano Air Base, Italy. But he still elicited plenty of laughs. (Kent Harris / S&S) 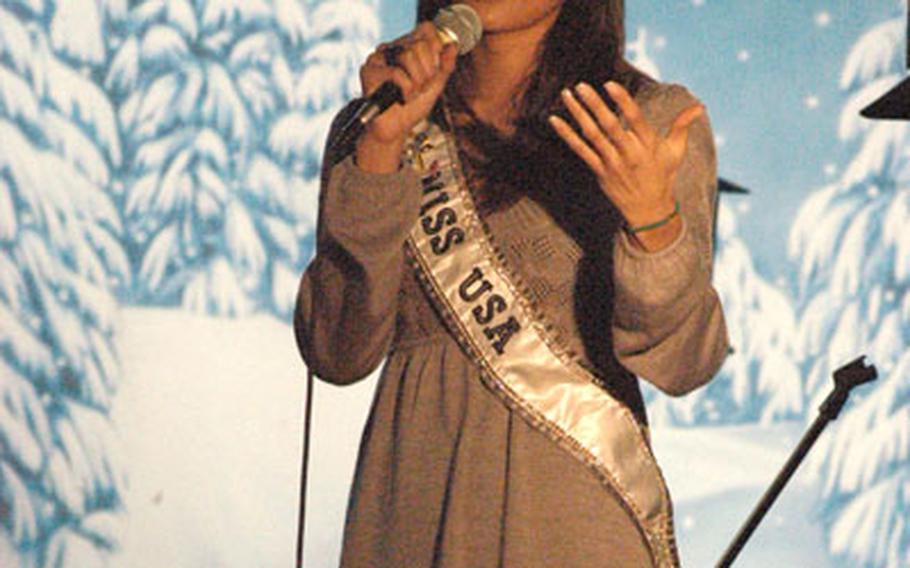 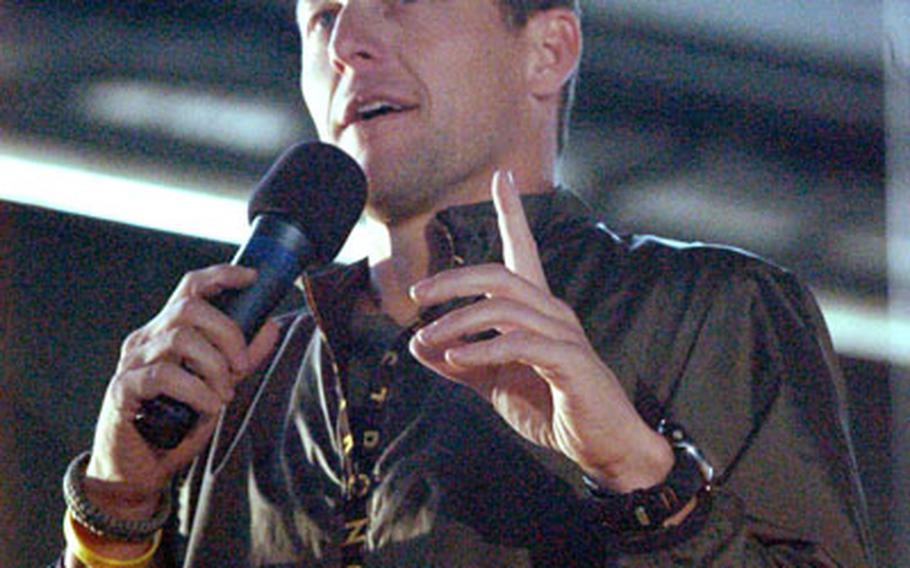 AVIANO AIR BASE, Italy &#8212; After a week entertaining troops downrange, a disparate group of celebrities took time off Saturday from their trip back to the States to put on a pair of USO shows in Europe.

Second Lt. Eric Carey, who attended a show in Aviano&#8217;s Hangar 1 that attracted about 2,000 people, summed up his thoughts in a few words: &#8220;Absolutely awesome. Robin Williams definitely lived up to his reputation as the funniest man alive.&#8221;

Williams got a lot of laughs, despite a cracked voice strained by 11 shows downrange and some nasty weather in Iraq.

After he and the other entertainers endured a sandstorm in Tikrit &#8212; which forced them to cancel a show in Baghdad &#8212; Williams joked: &#8220;I think I coughed up a small child. And Angelina Jolie immediately adopted it.&#8221;

Having children in the audience at Aviano definitely presented a challenge to both Williams and comedian Lewis Black, who had to tone down the acts they had presented to adult audiences downrange.

Black, famous for his cranky rants, acknowledged he&#8217;s not used to performing in front of so many children.

On and offstage, he and the other entertainers said how much they were inspired by their interaction with troops downrange.

Black called the receptions for the shows in Iraq, Qatar, Kuwait, Afghanistan and Kyrgyzstan &#8220;staggering. It&#8217;s one of the best experiences of my life.&#8221;

Lance Armstrong, one of the most famous athletes in the world after winning the Tour de France cycling race seven times, said he&#8217;s often called a hero. But he said servicemembers truly deserve that title.

Troops and their families at Aviano laughed along with Williams and Black, listened to Irish tenor Ronan Tynan, sang along with Kid Rock and heard inspirational messages from Armstrong and Miss USA Rachel Smith.

Aviano and Naval Support Activity Rota in Spain, where the group was to perform Saturday night, served as fuel stops on the way back to the States, with the main focus of the tour being Southwest Asia.

John Hanson, a USO spokesman, said the tour featured 11 shows downrange in less than a week.

Stops in Baghdad and at Bagram Air Base in Afghanistan had to be canceled because of weather, but otherwise performances went on as scheduled.

Williams, who persuaded Black and Armstrong to cancel vacations and join him on the tour, said he respects the sacrifices that servicemembers are making abroad and wanted to bring them some joy.