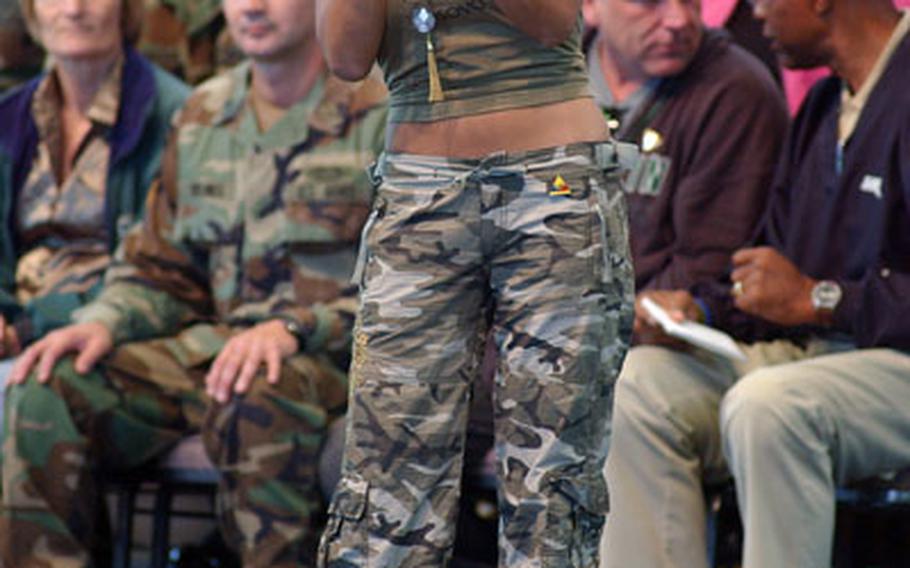 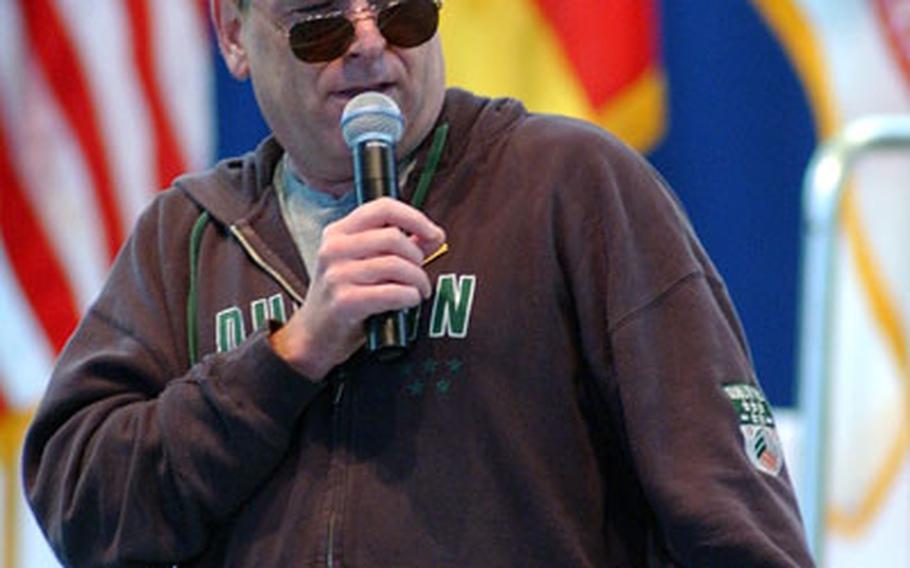 WIESBADEN, Germany &#8212; Hundreds of troops in Wiesbaden didn&#8217;t report to work Monday morning, but instead yucked it up with Gen. Richard B. Myers in a hangar at the Army airfield.

The chairman of the Joint Chiefs of Staff brought along a posse of celebrities to help make the soldiers&#8217; day of playing hooky all the better.

Leeann Tweeden of &#8220;The Best Damn Sports Show Period,&#8221; who is also the daughter of an Air Force Vietnam veteran, led the first show of a 10-day, 10-country United Service Organizations show with the general.

To kick off the event, 10 troops put up their right hands and were re-enlisted on stage by Myers.

Then the entertainment began.

Former Chicago Bears halfback and Hall of Famer Gale Sayers said the work the military does is inspirational. He compared soldiering to football and said the key is in the team. &#8220;No running back is ever going to get a yard without someone there, blocking and making the holes. It has to be done as a team,&#8221; Sayers said.

Comedian Jeff Ross, who is known for roasting celebrities, ribbed the general a bit and then sexed-up the show for the troops. &#8220;As long as you&#8217;re laughing, they&#8217;re laughing,&#8221; Ross said to Myers as his jokes got dirtier.

Capt. Dan Brosey, of Headquarters and Headquarters Company, 1st Armored Division, who caught Ross&#8217; show while in Iraq during a previous USO trip, said it was fun seeing the comedian again.

Ross used material from the Middle East to get the troops cracking up. The shock and awe only grew when comedian Colin Quinn took the stage.

Quinn, a former &#8220;Saturday Night Live&#8221; writer and cast member, raised the raunchy bar with his fast-paced stand up.

Toward the end of his show Quinn did a couple of impersonations of President Bush&#8217;s cabinet, with a piece on Donald Rumsfeld that was dead on.

With glasses pulled down low and a don&#8217;t-mess-with-me look on his face, Quinn pretended he was the secretary of defense talking to the media. After an extended pause he answered with an angry arm jutting out, &#8220;Because it&#8217;s a war!&#8221;

Before Myers took the troupe to their next gig in Kosovo, he told the audience that this tour is to meet as many men and women in uniform as possible and thank them before retiring in a couple of months.