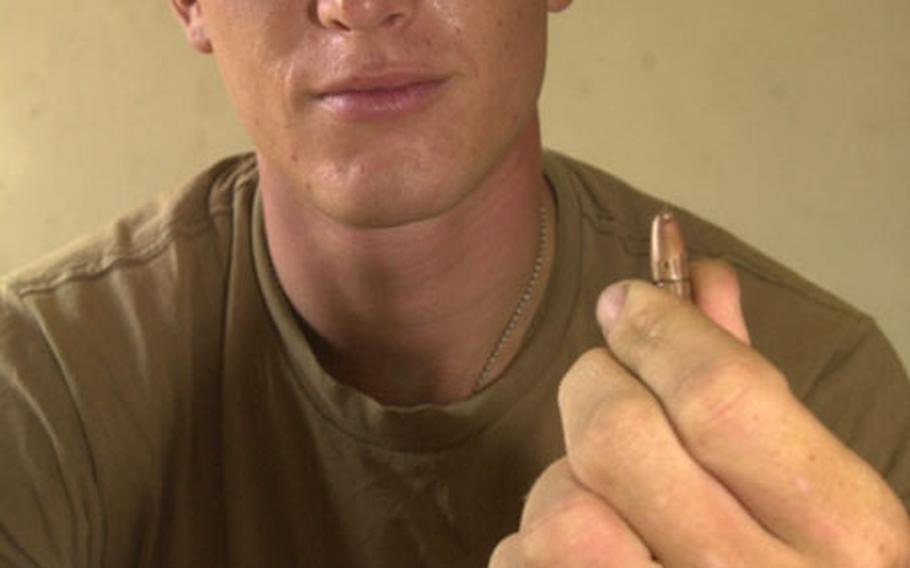 Spec. Christensen Cory, 23, a soldier with the 82nd Airborne Division, holds a bullet that hit him in the forearm. The bullet was likely fired by an Iraqi in celebration left only a welt that disappared in a few days. (Scott Schonauer / S&S)

BAGHDAD, Iraq &#8212; Army Spc. Christiansen Cory was talking with another soldier when he felt something smack his forearm.

But when Cory looked down, he discovered it wasn&#8217;t a rock that hit him. At his feet was a bullet from a Kalashnikov rifle. It was still warm.

The round likely came from an Iraqi who fired it into the air in celebration of a wedding, the birth of a child, or, for nothing in particular.

Every day, sometimes several times an hour, an Iraqi somewhere in the capital is shooting his rifle into the sky because he is happy about something. It is Iraqis&#8217; version of a party noisemaker.

The only problem is, what goes up must come down. And sometimes the bullets they fire into the air fall and hit people.

Cory, a paratrooper with the 82nd Airborne Division, was lucky. The bullet left only a welt that disappeared in a few days.

But for another soldier, a similar incident proved deadly.

Lambert was standing outside around 7:30 p.m. when fate and the bullet suddenly hit him square in the head. He was evacuated to the 28th Combat Support Hospital where he later died of the wound, the Army reported.

While the odds of getting hit by a bullet fired straight into the air seem extraordinarily remote, Iraqis have been killed by celebratory fire in the past. It was such a problem when Saddam Hussein was in power that he banned it and threatened to have the police arrest anyone caught doing it.

With Saddam now on the run, seemingly any family with a gun has brought back the trend. Squeezing a few rounds over the rooftops is now vogue again in Baghdad and elsewhere in the country.

When the news came out last month that U.S. forces killed Saddam&#8217;s sons Udai and Qusai, the skies crackled with celebratory gunfire and lit up with tracer rounds from elated Iraqis.

The popping sounds of rifles and pistols throughout the city were so intense that it caught some U.S. soldiers off guard.

At some camps, some soldiers said that the bullets rained down onto the rooftops and dinged Humvees. Some soldiers were ordered to stay in buildings or take cover. Troops had to wear their Kevlar wherever they went &#8212; even on secured camps &#8212; until the fireworks display ended and Iraqis had spent their jubilation ammunition.

In the confusion, some soldiers mistakenly shot partying, gun-toting Iraqis. However, some servicemembers said that Iraqis took advantage of the celebratory fire and ensuing chaos to take potshots at troops.

The question many soldiers are asking is, what will the celebratory gunfire be like when, and if, coalition forces capture or kill Saddam? Some are bracing for a torrent of happy gunfire.