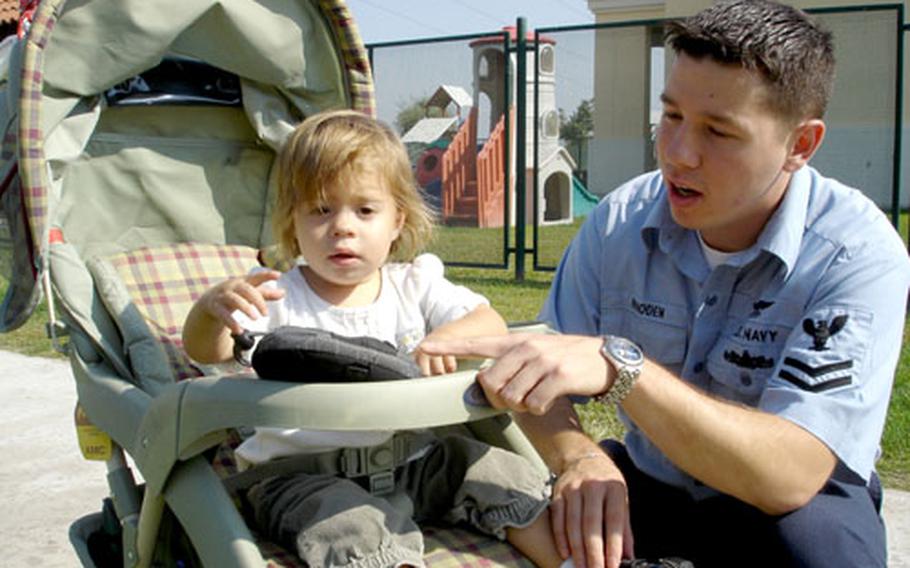 Andre Rhoden has to rely on private day care for his 15-month-old daughter, Isabella, while he waits for a vacancy to open up at the Child Development Center. A review of the policy governing the waiting list might make his wait even longer than anticipated. (Lisa M. Novak / S&S)

NAPLES, Italy &#8212; For Naples-based servicemembers with children in need of day care, placement at the Child Development Center is not guaranteed. And with a review of the waiting list policy currently under way, some families may have an even longer wait than anticipated.

The review could result in a reshuffling of the 220 applicants now awaiting placement.

Present enrollment between the two facilities at Capodichino and Gricignano stands at 153 children. Enrollment is based on the ratio of children-to-care providers, which varies depending on age groups. That ratio can range from four infants to one provider, up to one provider for 15 kindergarteners.

Currently, the need for child care is prioritized based on the number of working parents in the home. CDC officials are considering changing the policy to a first-come, first-served policy.

When Petty Officer 2nd Class Andre Rhoden and his wife, Marlena, signed their 15-month-old daughter, Isabella, up for day care, they knew it would take some time to secure her a space at the CDC.

Priority placement was given to those families with two working spouses, as opposed to those with one spouse at home. And in September, when Marlena began a new job at the bank, her employment status placed the couple closer to the top of the waiting list.

&#8220;We hoped to have a place for our daughter by mid-October,&#8221; said Andre Rhoden, a mass communications specialist with the Naval Media Center. He and his wife placed their daughter on the waiting list in August.

Until getting into the CDC, the Rhodens used the Child Development Home Program, which allows family members to use their homes as a day care for up to six children. There are presently four individuals employed as home-care providers and three more being processed.

A week before Marlena Rhoden started her new job, the Rhodens called to check their daughter&#8217;s place on the list. That&#8217;s when they were told that the policy governing the waiting list might change.

If priority were based on the date individuals signed up, Isabella&#8217;s place, they were told, would drop from third to about 15th.

According to Cammie Carlson, the CDC program administrator for Naples, the current policy gives consideration to those families with two working parents as well as single parents.

If the policy does change to reflect priority solely based on the sign-up date, &#8220;there would be approximately 78 children who would be moved either higher or lower depending on the date they requested care,&#8221; Carlson said.

She added that those negatively affected by any policy changes could have their case reviewed.

&#8220;We encourage families who may find themselves in a situation that may be detrimental to request a waiver to the policy.&#8221;

In the meantime, the Rhodens, as well as many other parents stationed in the Naples area, have limited choices. They have to balance the extra income earned by a dual-working couple, with the cost of day care. If the waiting list policy changes to a strict first-come, first-served priority, there might not be any choice, other than to rely on private care.