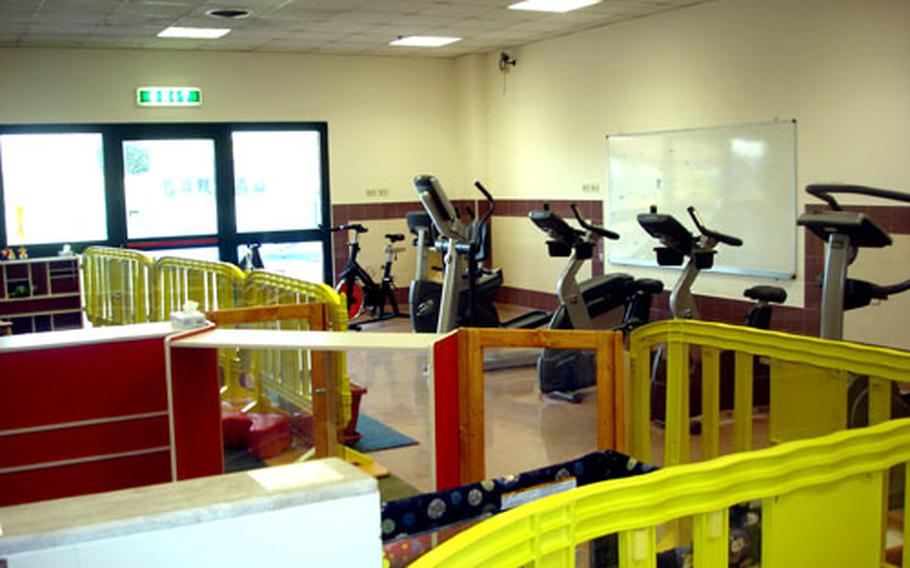 The family fitness room at the Child Development Center on the Navy Support Site at Gricignano in Naples, recently reopened. It has separate enclosures to keep children secure while parents work out on exercise equipment. (Lisa M. Novak / S&S)

NAPLES, Italy &#8212; The Child Development Center on the Gricignano support site recently reopened a facility for parents who need to keep an eye on their children while also keeping New Year&#8217;s resolutions to work out.

In addition to stationary bikes, elliptical cross trainers and other assorted equipment, the fitness room includes an enclosed area that lets parents watch their kids while they exercise.

The enclosures are divided into specific areas for infants, toddlers and preschoolers. The facility is designed for children from ages 6 weeks to 6 years.

The Naples CDC Family Fitness Room was initially opened in November, but closed shortly afterward when it was determined that stronger safeguards were needed for the children in the facility, according to Cammie Carlson the CDC program administrator for Naples.

&#8220;This facility is important so parents can have a healthy workout while being able to watch their children in a safe environment,&#8221; Carlson said.

She added that parents who want to use the facility have to go through an orientation with the base fitness center to ensure they understand how to use the equipment properly.

Naval Air Station Sigonella, Sicily, has a similar facility that includes an enclosed play area and elliptical machines, stationary bikes and a treadmill.

Base officials in Naples said the project was completed with input from Morale, Welfare and Recreation Sports and Fitness, Child and Youth Programs and the CDC. It was conceived more than a year ago, and involved securing a location, providing the equipment and making sure there was adequate space, Carlson said.