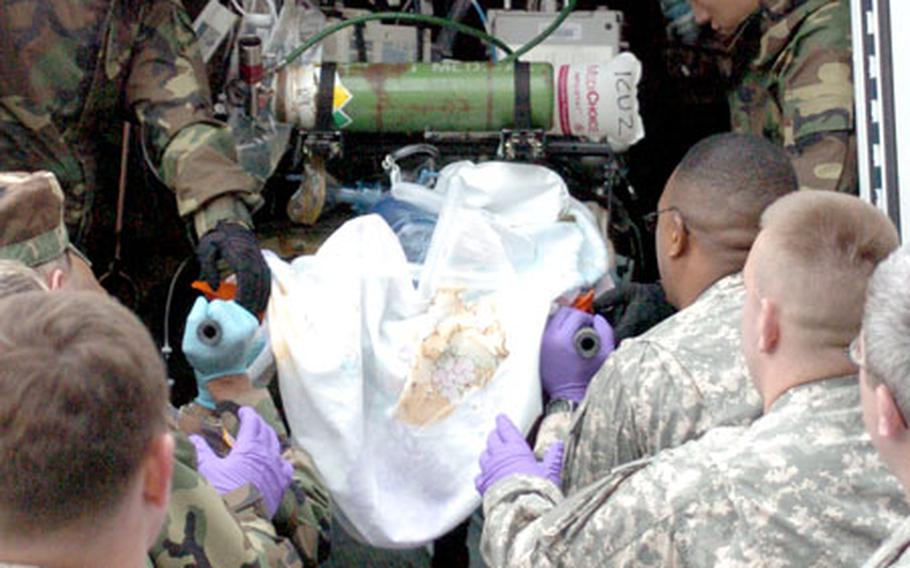 The wounded soldier that arrived with Dozier is Spc. David Gonzales, a 26-year-old with the 187th Infantry Battalion, according to the Landstuhl public affairs office.

&#8220;They were taken to our intensive care unit where our team of critical care specialists and trauma surgeons went over them from head to toe to reassess their condition,&#8221; said Col. W. Bryan Gamble, commander of Landstuhl Regional Medical Center.

Dozier, 39, was critically wounded by the explosion, but her vital signs were stable when checked at Landstuhl, said Gamble during a Tuesday afternoon news conference.

Dozier was seen moving her toes as she was unloaded from a bus at Landstuhl shortly after arriving there from Ramstein Air Base. She also opened her eyes during the flight to Ramstein from Balad Air Base in Iraq, Gamble said.

Another soldier, an Iraqi translator, CBS cameraman Paul Douglas and CBS soundman James Brolan were killed in the blast. The explosion also wounded six U.S. soldiers, including Gonzales. The CBS crew was reporting on patrol with the 4th Brigade Combat Team, 4th Infantry Division, when the car bomb detonated, according to CBS.

Most patients stay at Landstuhl between 48 and 72 hours and, if needed, undergo a surgery or two while they are there, Gamble said.

&#8220;Where she goes back in the States, we need to wait for her family to get here so we can discuss the options and possibilities at that time,&#8221; Gamble said.

Wounds related to roadside bombs are one of the more common injuries treated at Landstuhl, Gamble said. Landstuhl has treated more than 5,400 troops for battle injuries since the invasions of Afghanistan and Iraq.

ABC News anchor Bob Woodruff and cameraman Doug Vogt were injured in a roadside bomb blast Jan. 29 and treated at Landstuhl for their injuries.

As for Dozier, it&#8217;s too early to know how long her recovery will take, Gamble said.