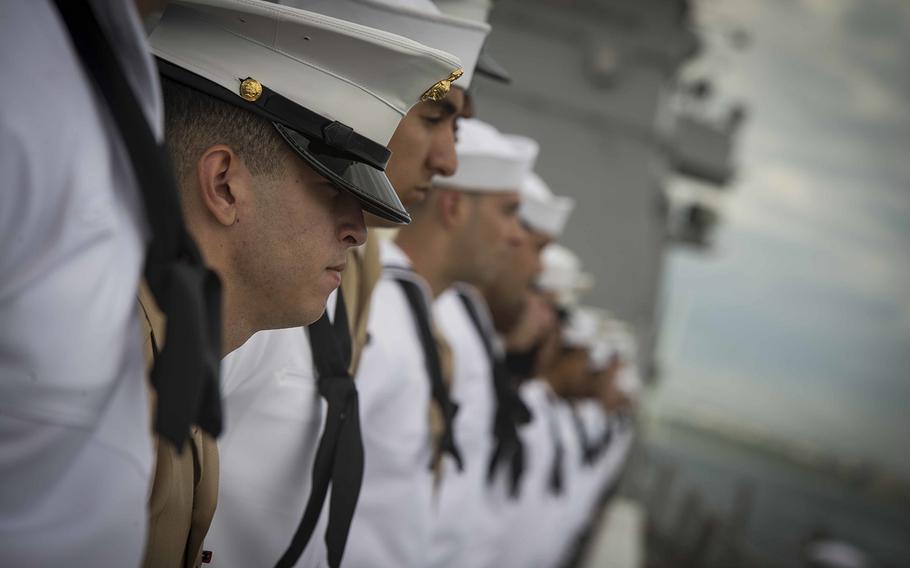 Sailors and Marines aboard USS Arlington (LPD 24) man the rails upon entry into New York City to celebrate Fleet Week New YorK on May 23, 2018. A recent proposal for the next defense policy plan would add 15,600 new servicemembers, to include 7,500 new sailors and 100 Marines. (Jake Stanley/U.S. Navy)

WASHINGTON — A proposal for the next massive defense policy plan would authorize $709 billion to fund a long list of initiatives from pay raises to troop increases to new ships, planes, submarines and missiles, according to an analysis by the Congressional Budget Office.

The House-passed version of the next National Defense Authorization Act, H.R. 5515, would raise defense-related funding from 2018 by 2 percent, or $15.6 billion, according to the agency, which issues cost and budget analysis of proposed legislation on behalf of Congress.

The measure passed the House floor last month in a 351 to 66 vote.

“The key focus of this bill is restoring readiness to ensure that when our men and women in uniform go out on mission, they have the best equipment, the best training and the best support our nation can provide,” Rep. Mac Thornberry, R-Texas, and the chairman of the House Armed Services Committee, said following the House passing the NDAA on May 24. “This bill also takes crucial steps toward rebuilding our military and reforming the Pentagon.”

The House plan would direct funding for pay raises of 2.6 percent, a boost to active-duty personnel by more than 15,000, an extension of certain bonuses and allowances, consideration of new improvements to the military healthcare system and purchases of new equipment and weapons.

Both versions of the legislation have been named for Sen. John McCain, R-Ariz., chairman of the Senate Armed Services Committee, who left Washington in December in his ongoing battle with brain cancer.

Members of the committee have “heard about the pressing needs of the men and women who serve in harm’s way: Greater readiness. Enhanced weapons capabilities in the air and on the seas. Simpler processes for acquisition. More support for military families,” Senate Majority Leader Mitch McConnell, R-Ky., said last week in early debate of the measure. “This NDAA will help equip our troops with the latest training and the best technology to confront those challenges and keep us safe.”

The House plan authorizes policy and spending for the Defense Department, but separate legislation actually funds the measures. The House Appropriations Committee is slated to consider its defense funding measure on Wednesday.

Of the overall $709 billion that would be authorized by H.R. 5515, about $639 billion would be considered part of the base budget, while another $69 billion would be directed for the overseas contingency fund, also known as the war fund.

The measure would add 15,600 new servicemembers and boost reserve forces by 800, bringing active-duty personnel levels to nearly 1.4 million and more than 800,000 for the reserves, the agency said. In a breakdown of active-duty increases by branch, the Navy would add the most with 7,500 new sailors, followed by the Army and Air Force with about 4,000 servicemembers each and 100 for the Marine Corps.

House NDAA would also direct new efforts, such as requiring Navy ships based overseas to travel back to the United States for maintenance and repairs, at a cost of $80 million a year, or $400 million for five years, the federal agency said.