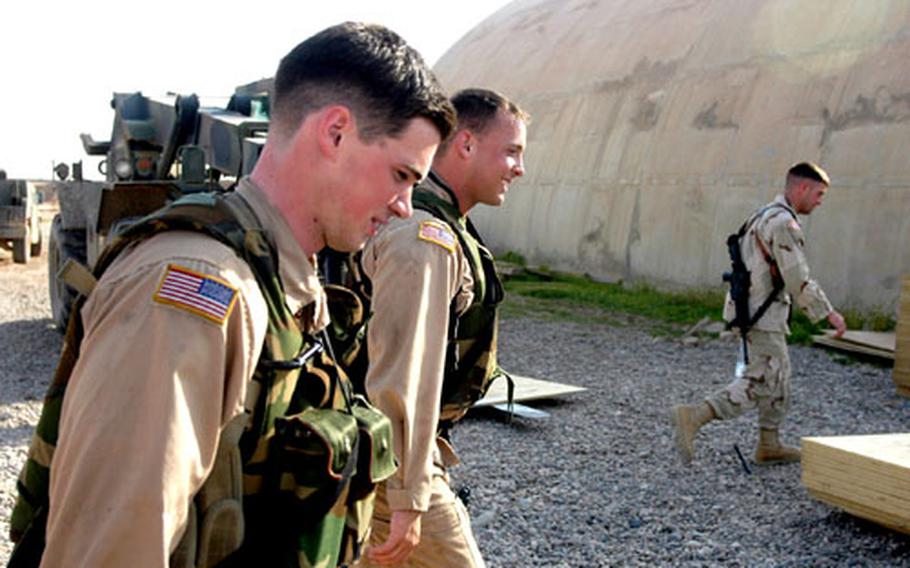 Chief Warrant Officer 2 Charles Folk, left, who will turns 21 on Wednesday, and 24-year-old 1st Lt. Mike Hultquist, both of 1st Squadron, 17th Cavalry Regiment, had about 30 hours of flying time between them before arriving in Iraq late last year. Since then, each has nearly 300 hours in the sky while flying missions for the squadron. (Charlie Coon / S&S)

Chief Warrant Officer 2 Charles Folk, left, who will turns 21 on Wednesday, and 24-year-old 1st Lt. Mike Hultquist, both of 1st Squadron, 17th Cavalry Regiment, had about 30 hours of flying time between them before arriving in Iraq late last year. Since then, each has nearly 300 hours in the sky while flying missions for the squadron. (Charlie Coon / S&S) Two pilots take off Thursday in their Kiowa OH-58D helicopter from forward Operating Base MacKenzie in Ad-Daluiyah, Iraq. To the pilots’ left is a .50-caliber machine gun; to their right is the rocket launcher. (Charlie Coon / S&S) AD DALUIYAH, Iraq &#8212; On March 22, troops from the Iraqi Ministry of Interior approached a remote camp used by insurgents. Soon, the bullets and small rockets flew, guns smoked and both sides took casualties. American ground and air forces moved in to support the Iraqis.

The helicopters zoomed over the reeds near Lake Thar Thar, strafing the enemy and taking fire while the soldiers on the ground took a breath. Then the choppers, low on fuel and ammo, got out of Dodge.

The 1st Squadron, 17th Cavalry Regiment can be called the cavalry riding to the rescue. Its pilots usually spend their patrols scanning the countryside, providing escort for convoys or dropping toys to children. But when a bomb explodes or battle flares up, the nimble Kiowas respond with lethal force.

Two days earlier, pilots from the 1-17 were patrolling near Baqouba when they saw a mushroom cloud about 12 miles away. They flew in to investigate and took fire.

&#8220;We ID&#8217;d seven individuals who were engaging us, and we returned fire. We made three passes,&#8221; said Capt. Ashley Thomas. The mushroom cloud was from a car bomb and had been detonated next to an Iraqi police station. It was the first of five synchronized attacks within a few minutes north of Baqouba. The car bomb, soldiers later concluded, was likely meant to draw in Iraqi and U.S. ground troops, who would be ambushed by insurgents in the subsequent attacks.

The Kiowa pilots saw a suspicious gray van and reported it, but the pilots were taking small- and large-caliber ground fire from several directions. The two-seat exposed cockpit did not offer much protection. To hell with the van, the pilots decided.

The van was soon discovered with its engine still running. It contained rocket-propelled grenades, other grenades and AK-47 machine guns. The occupants weren&#8217;t there and were presumed to be somewhere else, soaking in their own blood.

The lightweight chopper is a modified version of the Bell 406 helicopter sometimes used in the United States by airborne police and hospital air-rescue teams. For 1st Squadron, part of the 42nd Infantry Division&#8217;s Task Force Liberty, the extra space is used not for people but for weapons systems and vision equipment.

Lt. Col. Frank Muth commands the 1-17 and its 24 aircraft and 350 soldiers, which are split between bases in Ad Daluiyah and Mosul. Managing the troops is easy, he said. The hardest part? Worrying.