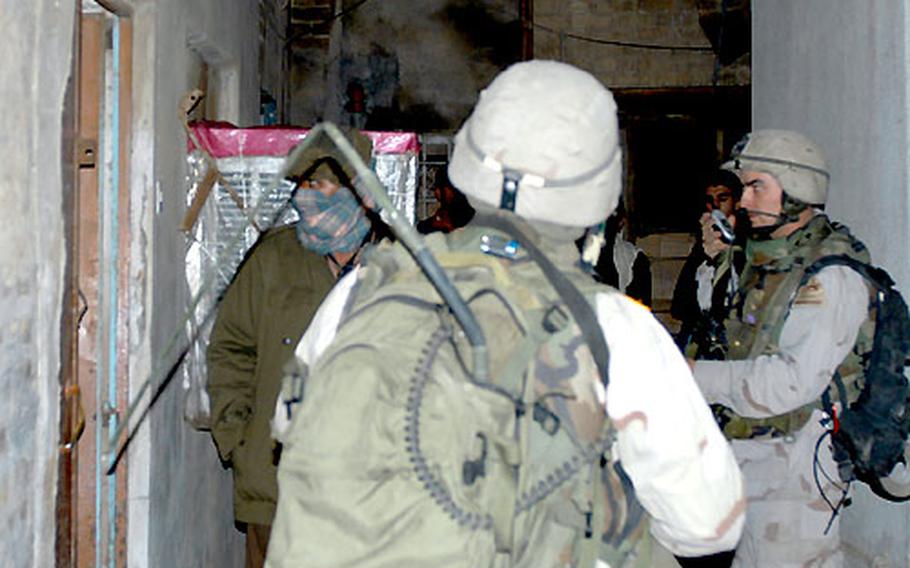 Sgt. Joshua Bayles, right, 24, of Grand Rapids, Mich., supervises house-to-house search in the back alleys of Baghdad, Iraq, during operation carried out by his unit, the 1st Armored Division&#39;s 1st Battalion, 36th Infantry Regiment. Minutes later, Bayles&#39; section heard gunfire that at first sounded like it might have been on one of the rooftops above them. (Franklin Fisher / S&S)

Sgt. Joshua Bayles, right, 24, of Grand Rapids, Mich., supervises house-to-house search in the back alleys of Baghdad, Iraq, during operation carried out by his unit, the 1st Armored Division&#39;s 1st Battalion, 36th Infantry Regiment. Minutes later, Bayles&#39; section heard gunfire that at first sounded like it might have been on one of the rooftops above them. (Franklin Fisher / S&S) 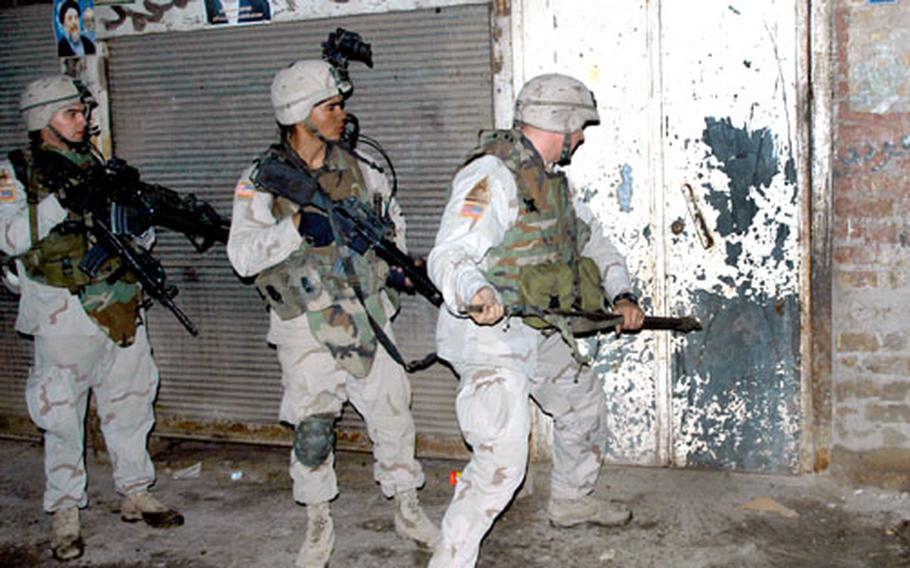 In a Baghdad neighborhood, soldiers with the 1st Armored Division’s 1st Battalion, 36th Infantry Regiment break in a door during a search for illicit weapons Friday. The sweep was part of Operation Iron Hammer, launched by the U.S. military last month to counter insurgent guerrilla attacks. (Franklin Fisher / S&S) 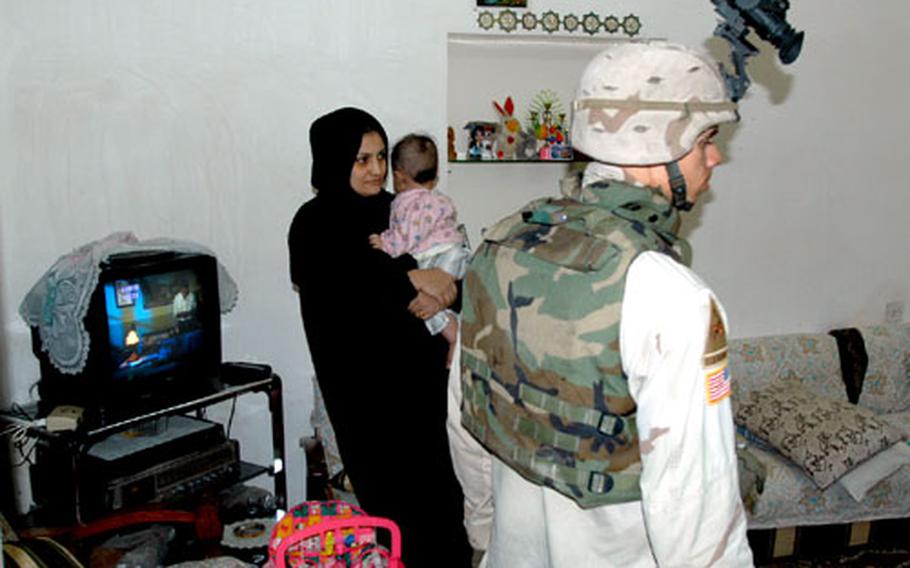 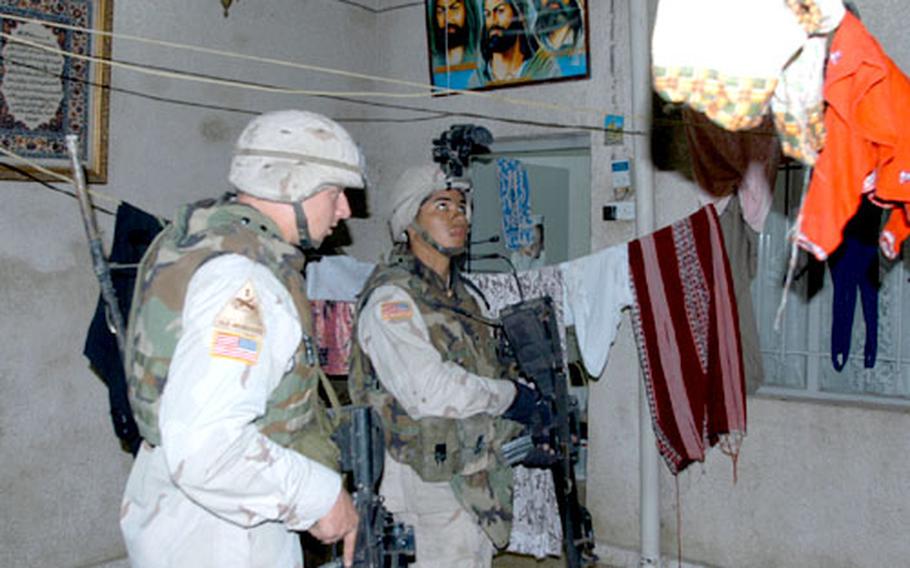 Soldiers with the 1st Armored Division’s 1st Battalion, 36th Infantry Regiment eye the interior of a home in Baghdad as their unit conducts a search for illicit weapons Friday. (Franklin Fisher / S&S)

BAGHDAD, Iraq &#8212; The men playing cards in the cool night air looked up as the combat vehicles rolled into their neighborhood.

The Americans, seemingly appearing out of nowhere, began uncoiling razor wire to seal off the area.

The troops from the 1st Armored Division&#8217;s 1st Battalion, 36th Infantry Regiment, were in the central Rusafa district to conduct a house-to-house search for contraband weapons and ammunition. With them were 22 soldiers of the Iraqi Civil Defense Corps.

In all, some 250 troops and 44 combat vehicles were involved.

The operation, which lasted four hours, was part of a broad effort to keep the pressure on the insurgent guerrilla network that made November the deadliest month for U.S.-led coalition forces in Iraq since the war began.

Troops also had the addresses of three suspects sought in attacks on coalition forces.

It was a night of surprises and more.

It afforded a clear picture of the kind of war the Iraq conflict has become. It showed the risks and challenges U.S. forces face as they cope with urban guerrillas, rather than big conventional land forces.

Sgt. Joshua Bayles, 24, of Grand Rapids, Mich., led his Scout Platoon Bravo down a narrow side street to its assigned area. On this night, his unit consisted of six Americans, two Iraqi soldiers and an Iraqi interpreter.

Bayles held a copy of a satellite map showing the buildings they&#8217;d be searching. They worked in a twisting warren of narrow back alleys walled in by old stone and brick buildings three and four stories high.

Sagging electric wires ran overhead between buildings, and now and then a large rat darted in the shadows. The smell of human waste hung in the air.

They moved cautiously down the alleys, scanning the upper stories with flashlights attached to their weapons.

At each door on their &#8220;knock-and-search&#8221; list, the troops used the same method. They knocked, and the interpreter told the occupants the troops would check for excess weapons and contraband. Occupants are asked to tell at the outset what weapons, if any, they have.

In most houses, the only light was from small gas lanterns. The troops relied heavily on their flashlights.

Two soldiers go in first and begin a floor-by-floor search for any spot that might hide contraband. Two more follow.

Two others stay outside to guard the entrance and to keep radio contact with the command. And they bar anyone from passing through a search area until the troops are finished with those houses and have moved on.

In each home, the soldiers moved the occupants into a single room while the search was under way. An exception was one house where at least a dozen children, including babies, were bundled up asleep in various rooms.

Inside, the soldiers opened closets, rummaged through drawers and climbed crumbling stone stairs to check the rooftop.

When a house was searched, a soldier spray painted a C to indicate it had been cleared. If vacant and the troops opted to bypass it, they sprayed an X.

The Iraqis are allowed to keep two weapons in their homes for self-defense. &#8220;Special weapons&#8221; &#8212; rocket-propelled grenades, mortars, machine guns and explosives &#8212; are forbidden.

Those caught with these types of weapons could face 15 years in prison.

An absence of hostility

At no point during the night did the Iraqis in their homes show hostility to the Americans.

In one house, two women appeared wide-eyed and tense with fear. But most, including women and children, seemed to take the searches in stride.

Some thanked the Americans for their efforts.

At one house Bayles asked a question through the interpreter.

Then an elderly woman in black stepped forward.

At 9:18 p.m. the troops were at the end of a narrow alley, where a group of Iraqi women watched them from a second-story window.

Suddenly, the troops heard a strange, metallic noise, similar to gunfire but sounding more like several sets of steel shutters being pulled open and shut repeatedly.

A long moment later that rattling gave way to the unmistakable sound of machine-gun fire. It sounded close enough to be on the rooftops above them, and the Bravo troops pulled back several yards, tense, uncertain, weapons ready.

Minutes later, Bayles gets an update over the radio.

When things settled, Bayles moved the troops down the alley to resume their searches.

They later learn how close the gunfire was, some 50 yards off on the other side of the buildings they searched. An insurgent drove a stolen car at high speed straight into the street where the soldiers had set up a temporary command post.

The car, coming in at about 60 miles per hour, ran through several rolls of razor wire. Turret gunners fired on it. One of the car&#8217;s occupants started firing an AK-47 rifle, green tracer rounds issuing from the speeding vehicle and ricocheting everywhere.

With its tires now flat, the car went forward on its rims in a shower of sparks and a trail of tangled razor wire. It continued up the street, leaking gas, chunks of metal breaking away in a storm of fire from M240B and .50-caliber machine guns. The car reached the end of the street before it halted and burst into a ball of flames. Both occupants were dead.

Four Americans were wounded. Three had shrapnel wounds and returned to duty the next day. The other was due back the day after that.

Then came more surprises. One of the car&#8217;s occupants was one of the suspects troops were looking for. He turned out to be a member of Fedayeen Saddam, an insurgent group playing a role in the guerrilla attacks on coalition forces, said Maj. Paul Kreis, the battalion&#8217;s operations officer.

At about 12:10 a.m., the search was about over. The battalion searched 150 houses and recovered several weapons.

Bravo section started for the Humvees. For four hours they&#8217;d had to be all business. But toward the end, it was the local rat population that brought a classic flash of GI humor.

A few minutes later, as they&#8217;re wrapping up in the alleys, a cat snarled fiercely.