Catering to the troops 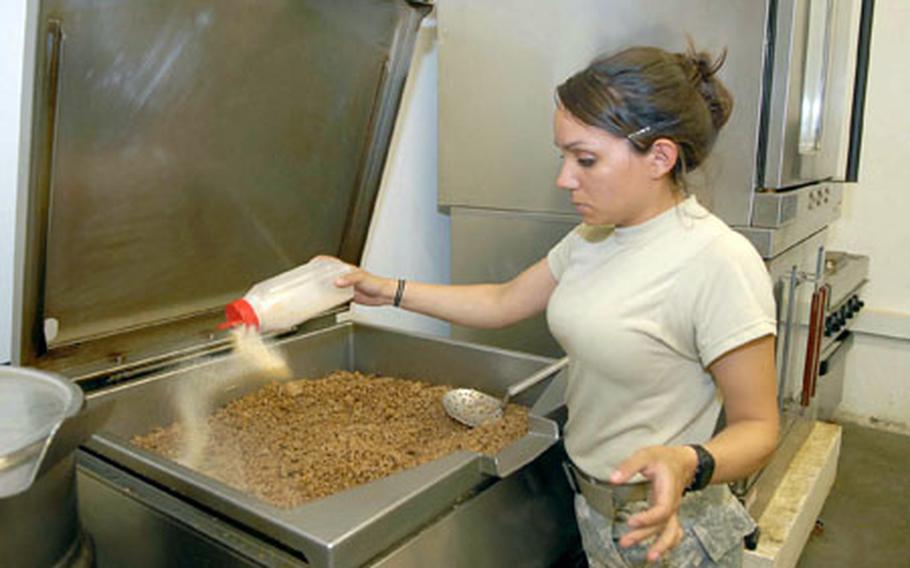 Spc. Mackenzie Monette adds some garlic powder to the batch of Chili Mac she is cooking up for the soldiers stationed at Camp Blessing, Afghanistan. (Michael Abrams / S&S)

Spc. Mackenzie Monette adds some garlic powder to the batch of Chili Mac she is cooking up for the soldiers stationed at Camp Blessing, Afghanistan. (Michael Abrams / S&S) 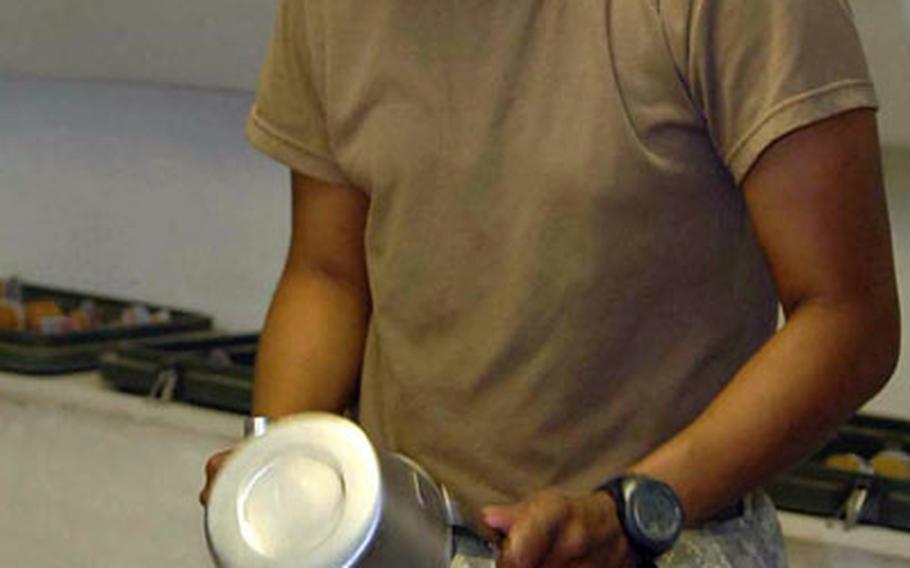 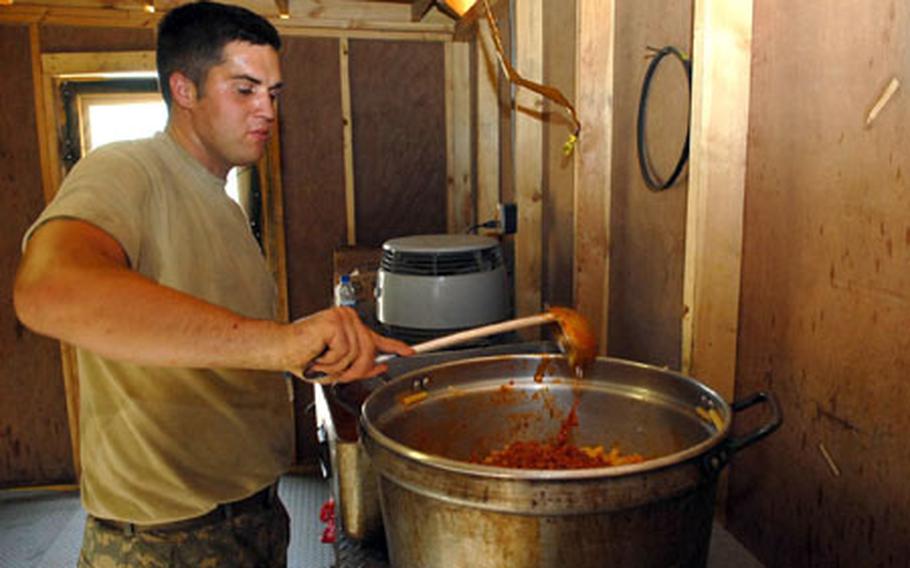 Pfc. Jason Huft spoons an Italian sausage and tomato sauce into a big pot of ziti noodles as he prepares supper for the men of Company C, 1st Battalion 32nd Infantry Regiment, 10th Mountain Division, at their base in the Pech River Valley in eastern Afghanistan. Huft, an Army cook, has a degree in culinary arts from Le Cordon Bleu. (Michael Abrams / S&S)

In a classic TV episode of &#8220;M*A*S*H,&#8221; Hawkeye Pierce chides Igor, an Army cook, for the same tedious, tasteless slop he dishes out day after day.

&#8220;I&#8217;ve had a river of liver and an ocean of fish,&#8221; the wise-ass, womanizing, warm-hearted doctor says before badgering poor Igor some more and igniting a mess hall uprising.

Generations of soldiers have derided the guy at the end of the serving line with a spoon in their hand, even if, deep down, they find the fare fair to eat.

But these days, particularly at large U.S. installations, military cooks are largely missing in action. At such mega bases, the cooks in the kitchen are usually civilians employed by contractors like KBR.

On land, in a war zone, a person today likely has to travel pretty far from the flagpole to find a cook in combat fatigues.

The place Toney spoke of is Camp Blessing, located near the Afghan village of Nangalam. KBR employees do work here &#8212; you just won&#8217;t find them in the kitchen.

Four months ago, when the 10th Mountain Division&#8217;s tour got extended and Jalalabad grew from a battalion to a brigade headquarters, a small food fight arose over kitchen duties. In the end, KBR won out, Randall said, because it was determined there weren&#8217;t enough Army cooks to support the mission, much to the chagrin of the brigade.

At times, Randall, Toney and the other cooks at Blessing pull guard duty. That&#8217;s common. In fact, a cook at another base earned a medal for his role in a fight with Afghan militants.

It&#8217;s hard to imagine Igor doing the same. But in the end, the M*A*S*H cook redeemed himself with a tasty rack of barbecue ribs &#8212; though the feast was cut short by the sound of choppers signaling incoming wounded.

At Camp Blessing, soldiers don&#8217;t miss too many meals if they can help it.

A typical menu may lack the variety of a KBR kitchen, but cooks make up for it with a dash or two of creativity. One recent late-night meal consisted of chicken wings and onion rings. And the day before, baked ziti was all the rage around camp.

Pfc. Jason Huft joined the Army two years ago because, he said, &#8220;everybody should serve one term.&#8221; Before he enlisted, the 24-year-old earned his degree in Minnesota, and then returned home to New Mexico, where he worked at restaurants in Santa Fe and Albuquerque.

On this day, Huft is preparing a dish of ziti noodles and Italian sausage meat. He peels away the casing and lets the contents fall into a large, deep pot, where it is later mashed and mixed with tomato sauce and spices.

Soldiers don&#8217;t have that luxury, at least not when deployed. But Huft doesn&#8217;t take his captive audience for granted. Haynes said when soldiers return from a remote outpost or from an especially taxing mission of several days, Huft prepares a feast for them.

And he likes it even more when soldiers come back for seconds, no matter if he&#8217;s serving liver or fish.