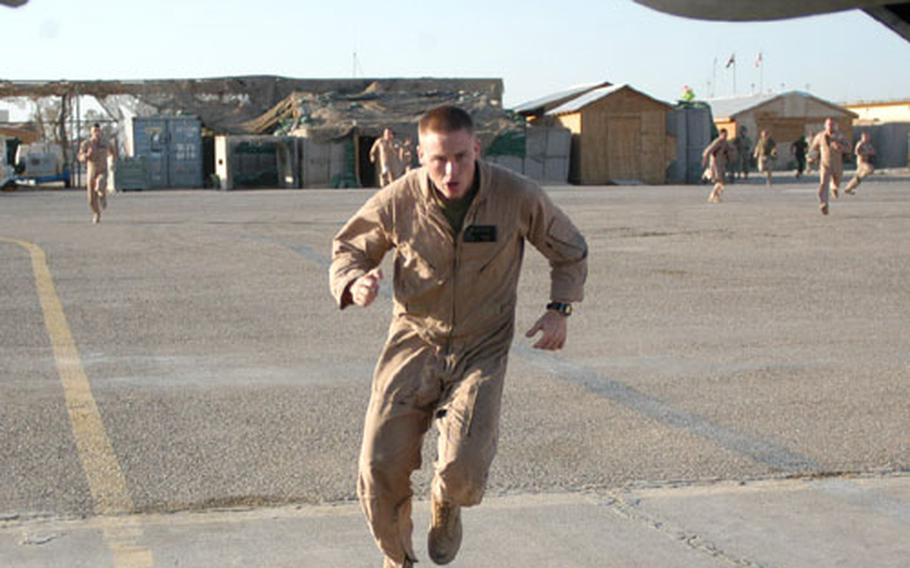 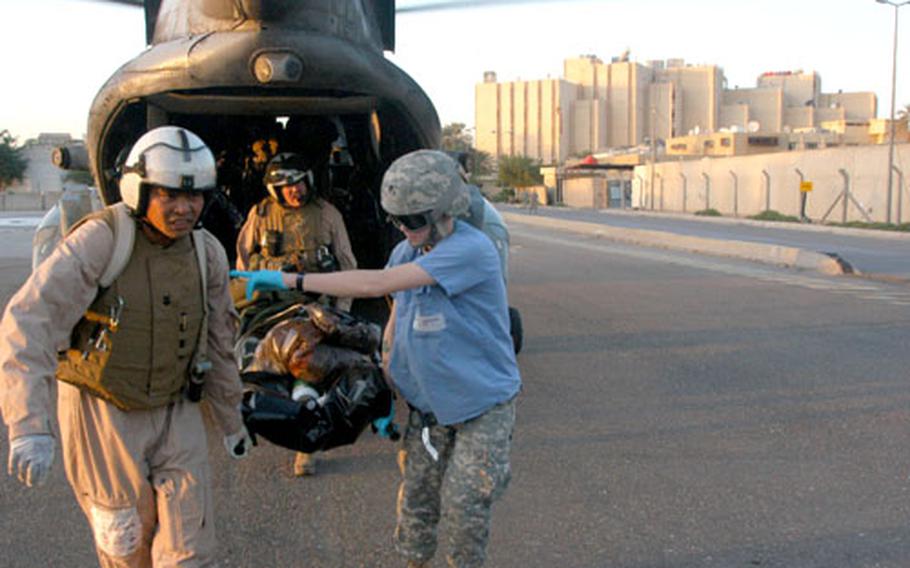 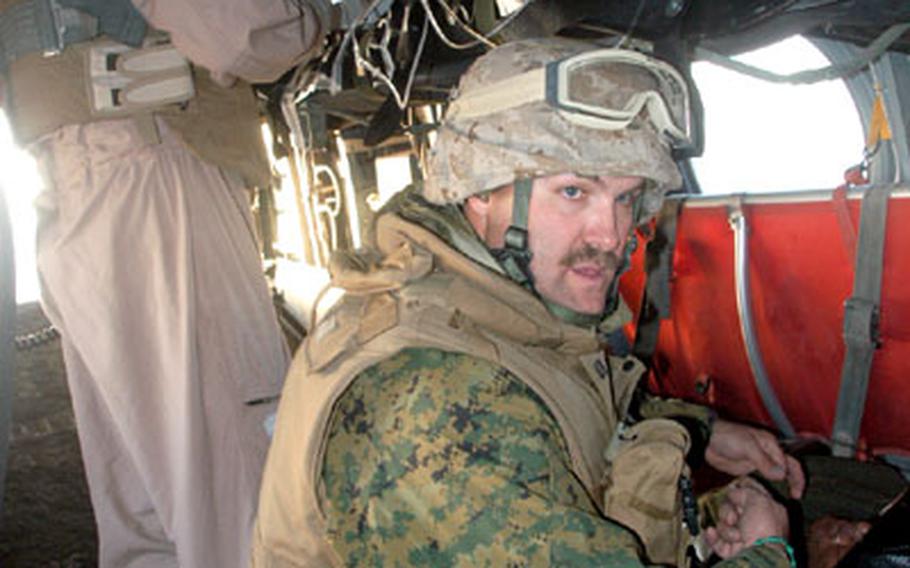 Navy Lt. James A. Nowell III treats an Iraqi soldier aboard a CH-46 helicopter during an emergency evacuation flight from Ramadi to Baghdad. The soldier had been wounded in a bomb blast. In the background, Petty Officer 1st Class Jess Agustin treats another patient. (Charlie Coon / S&S) 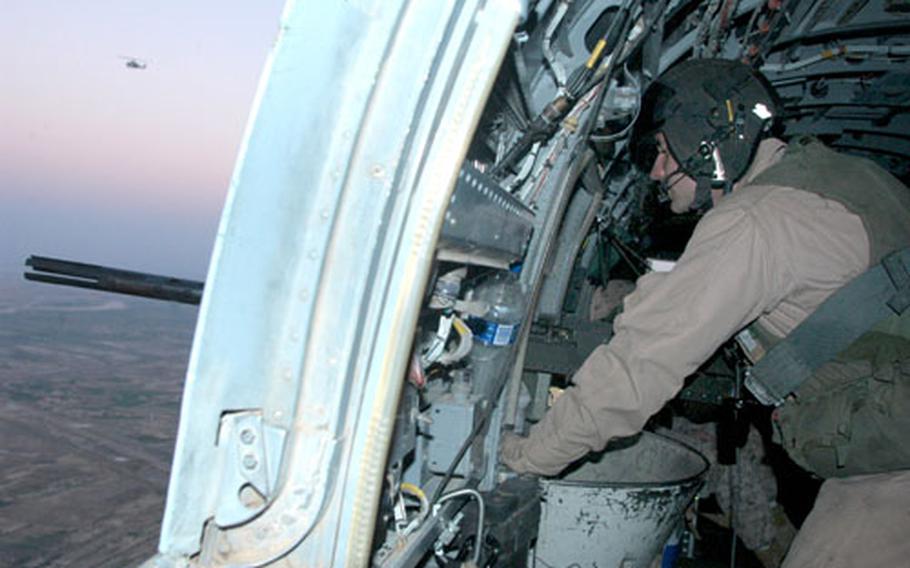 Sgt. Travis Pfister watches for enemy fire from the side of his CH-46 helicopter as another helicopter flies near after completing an emergency casualty flight from Ramadi. (Charlie Coon / S&S)

CAMP TAQADDUM, Iraq &#8212; The sporadic violence that marks the war in Iraq is largely a game of hide-and-seek.

The burned, sliced or shot troops who survive attacks often do because they&#8217;re flown quickly by helicopter, treated in flight by medics, and taken to where doctors save life or limb.

HMM-364 is a 176-troop team of Marines and Navy corpsmen. HMM stands for Helicopter Marine Medium, a stodgy way to refer to its small fleet of venerable CH-46E aircraft.

Like at a fire station, a bell is rung and then a siren wails to alert whichever team is on call to get its rear in gear. The crew &#8212; two pilots, two crew, two Navy corpsmen &#8212; sprint to their helicopter and make it airborne within a few minutes.

On Monday, for example, a crew flew from Camp Taqaddum to nearby Camp Ramadi and picked up three burned and battered Iraqi soldiers. Roadside bomb? Car bomb? The evacuation crew members neither knew nor cared. They pored over the three Iraqis with medical care, monitoring vital signs and administering intravenous fluid, 1,000 feet above the ground inside a cramped helicopter, in flight to a combat support hospital in Baghdad.

It took 59 minutes from when the bell rang to the landing in Baghdad, roughly 50 miles away. These wounded had been first brought to Camp Ramadi. About one-third of the time, the &#8220;Purple Foxes&#8221; fly straight to where an attack took place, where some of the crew fans out to provide security.

Sometimes they pick up civilians. Lt. Col. Sean Killeen, the unit&#8217;s commander, told of a recent car accident in which an infant died, but a woman and her 9- and 12-year-old children were saved.

A bomb that wounds more than 50 Iraqi soldiers; a Marine staff sergeant blasted in his Humvee &#8212; those were just a few of the recent calls for the unit that got its name from the Purple Hearts its predecessors won in Vietnam.

In September and October, the unit flew more than 250 urgent missions, Killeen said. Often the crew has no idea who it has picked up and dropped off. Or if it helped save a life.

The troops on duty must stay ready.

Mechanics work a lot on the CH-46s, which one Marine described as being like trusty, old pickup trucks. Simple in design, perfect for the desert, but in need of constant TLC. One of the birds &#8212; PF-21 &#8212; flew extensively during the Vietnam War&#8217;s Tet Offensive.

Sometimes, Killeen tweaks his team. He&#8217;ll put an administrator or clerk on board for an evacuation flight, just to keep a Marine on his toes. It seems to work.

Williams, of Savannah, Ga., is a big, strong man who is the father of four sons. Joann is his wife of 16 years. His main job is tracking the helicopters&#8217; maintenance records. He started to cry after describing a recent mission.

His pilot bent the helicopter into a hot landing zone. Two young Marines were retrieved, one with burned legs, the other with a badly wounded arm. Williams was locked and loaded and ready. After the wounded were carried onto the chopper, he clambered back on board and it flew off.

&#8220;When I come back and sit down and gather my thoughts,&#8221; Williams said, wiping away tears, &#8220;it seems like what I do is not enough for those Marines and others outside the wire.