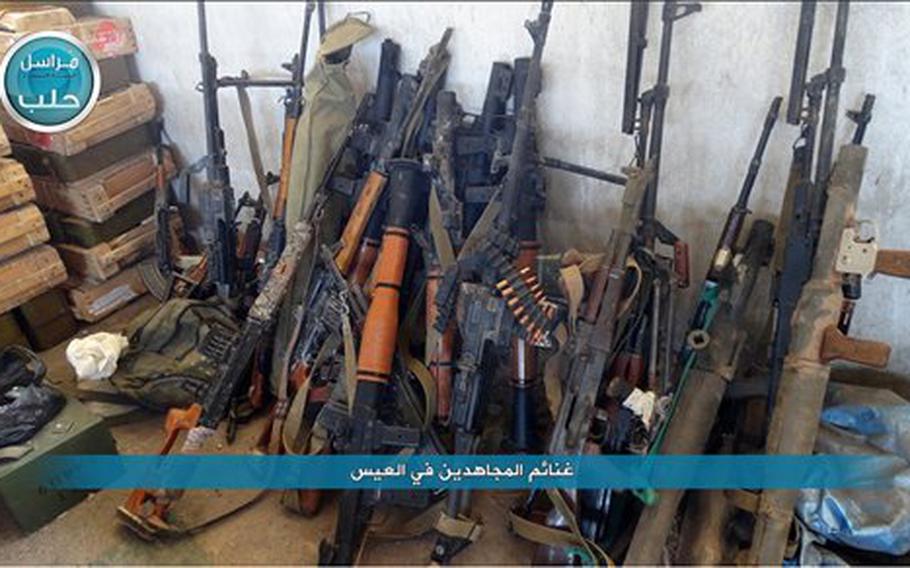 This image posted on the Twitter page of Syria's al-Qaida-linked Nusra Front on April 2, 2016, shows weapons captured by Nusra Front during the militants attack on the northern village of al-Ais in Aleppo province, Syria. (AP)

DAMASCUS, Syria — At least 70 people have died in and around the embattled northern city of Aleppo in the past three days as combat continues to intensify despite a cease-fire that is holding in most parts of Syria, government and opposition sources said Tuesday.

The casualties include five rescue workers killed in an airstrike on the town of Atareb, located in rebel-held territory about 12 miles west of Aleppo, the Syria Civil Defense volunteer group said in a statement.

The group, whose members — known as “White Helmets” — work as emergency crews in many opposition-held parts of the country, said the strike followed “three of the most intense days of bombardment in Syria in over a year.”

The escalation coincided with President Barack Obama’s announcement in Germany on Monday that the United States would send 250 more troops to Syria. Green Berets will likely make up a large portion of that contingent, which will be joining some 50 special forces deployed to northern Syria late last year.

The Green Berets headed to Syria will be inserted into elements of the Syrian Democratic Forces, a 20,000-strong unit of primarily Kurdish fighters in the northern part of the country. The U.S. has already been working with this force to attack the Islamic State group in Syria, a U.S. defense official told Stars and Stripes.

Analysts say the escalating bloodshed is seriously undermining a cease-fire brokered by the U.S. and Russia — the first in the five-year war that has so far claimed at least 250,000 lives, The cease-fire has resulted in a sharp decrease of casualties since it was implemented at the end of February.

The escalation also coincided with last week’s walkout from peace talks in Geneva by the Saudi-backed High Negotiations Committee, which cited the worsening situation on the battlefields and numerous alleged violations of the cease-fire by Syrian government forces.

The British-based Syrian Observatory for Human Rights, a pro-opposition monitoring group, confirmed on Tuesday that five people had been in the aerial bombardment of the local civil defense center in the rebel-held town of Atareb, saying it appeared to have been deliberately targeted.

Syria’s state-run SANA news agency reported late Monday that rebel shelling of the government-held part of Aleppo had killed 18 civilians and injured 86. This brought the total number of deaths in the area since Friday to more than 70.

The situation in Aleppo, which is divided between government- and opposition-held areas, is particularly complicated because the main rebel force there is the al-Qaida-affiliated Nusra Front, which together with the Islamic State is not part of the current truce because they are considered terrorists.

Moscow has called on the moderate rebels, who are intermingled with Nusra fighters in the city, to distance themselves from the terrorists group in order to avoid being hit.

Aleppo’s current population is estimated at about 2 mllion people. Foreign humanitarian groups say that more than 1.5 million live in or have fled to the government-held western part of the city, while just more than 400,000 remain on the opposition side.