Cash cow on the run in K-Town; reward offered 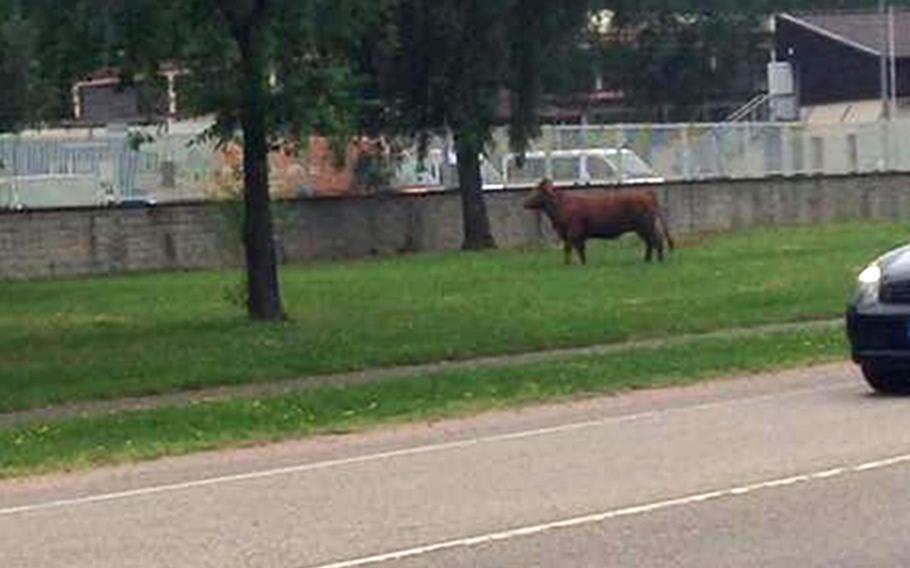 The runaway cow outside Vogelweh complex in Kaiserslautern, Germany. (Courtesy of Stella Mammone )

KAISERSLAUTERN, Germany — She’s been on the run from police for three weeks, now from bounty hunters hoping to cash in on a reward offered for her safe capture.

The suspect, a brown cow, escaped from a slaughterhouse three weeks ago.

An animal charity that rescues animals destined for slaughter is offering a reward to anyone who catches the cow unharmed. A good portion of the 2,800 euros on offer will be used to pay the owner for the cow’s purchase so it can be placed on a farm to live out its life in peace, the Rheinpfalz newspaper reported Monday.

Police had failed to find the cow when she was first reported missing, but she was spotted Monday evening on Kaiserstrasse in Einsiedlerhof, where the the U.S. Army’s Pulaski Barracks is located, disappearing into the woods “near the fast food restaurant with the golden M,” police said in a statement.

When police arrived, she had vanished, but she was later seen crossing the train tracks before disappearing again into the woods.

Later Monday evening, police were alerted to a possible break-in at a business and discovered three people with flashlights on the train tracks. They were searching for the cow in hopes of getting the reward, they told police.

Police spokesman Wolfgang Denzer said how much the finder would be entitled to would depend on the cow’s replacement value. The reward could be as much 800 euros after the price of the cow is paid.

If police do catch the cow, he said, they will turn it over to the animal protection group.

“The cow is not dangerous,” Denzer said, “but something could happen if she crosses a street.”