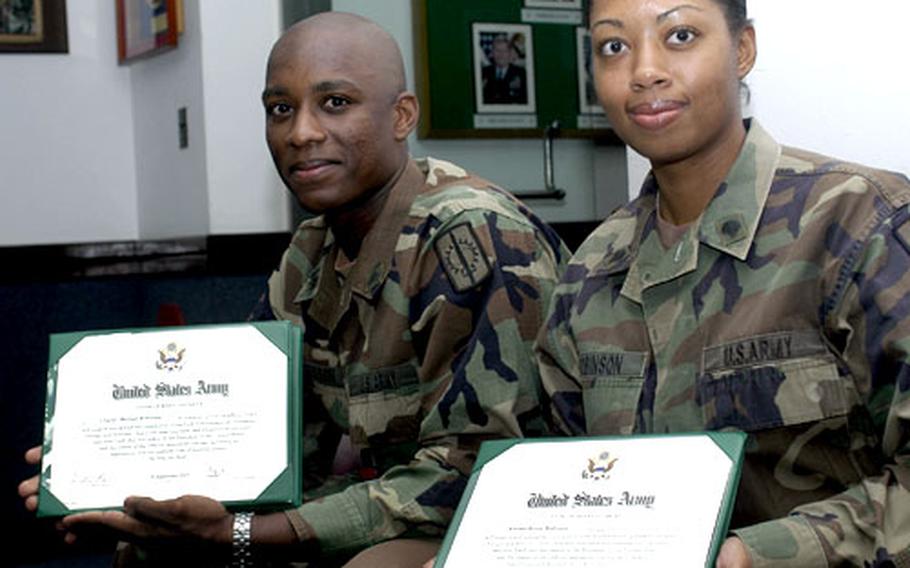 Sgt. Michael Robinson and Spc. Katrina Robinson, who are married, beam after re-enlisting in the Army on Monday at the 8th Military Police Brigade headquarters on Yongsan Garrison. The two soldiers took advantage of a special program for soldiers in South Korea, Iraq, Afghanistan and Kuwait that offered a $5,000 bonus for a three-year re-enlistment. (Jeremy Kirk / S&S)

YONGSAN GARRISON, South Korea &#8212; Within a few minutes of each other, Sgt. Michael Robinson and his wife, Spc. Katrina Robinson, elected Monday for three more years of job security and educational opportunities by staying in the Army.

By re-enlisting, they also scored some cold, hard cash. Under a brief program offered Sept. 19 through Tuesday, soldiers stationed in Iraq, Kuwait, Afghanistan and South Korea could get a $5,000 bonus for re-enlisting for another three years in the Army. Soldiers in South Korea had to agree to stay an additional six months in country.

The program was open to active-duty soldiers ranked specialist through master sergeant along with privates first class finishing two-year enlistments.

The two recently were talking about whether to re-enlist. They heard a radio commercial for the $5,000 re-enlistment program just seconds after they finished discussing it. &#8220;I guess it was just meant for us to re-enlist,&#8221; Michael Robinson said.

He signed up for the Army in September 1999 after completing bachelor&#8217;s degrees in English and education at Bridgewater College, Bridgewater, Va. His decision also was based on the Army&#8217;s loan repayment program.

Robinson, 26, had taught but said he&#8217;s found guiding enlisted soldiers is more satisfying, because they want to be in the Army, learning. &#8220;Ultimately, they want something better out of it,&#8221; he said.

He compiles a daily analysis of anti-terrorism measures, dissident actions and a risk assessment, so commanders know the location and number of Korean National Police to be assigned to protests. Air Force Lt. Col. Gerald D. Curry, deputy provost marshal, called Michael Robinson &#8220;the heavy lifter,&#8221; saying the military is glad to use his talents for a long period of time.

Katrina Robinson decided to stay in part to continue her college work. She is about four classes short of an associate&#8217;s degree in business management at the University of Maryland.

She works with the 8th Military Police Brigade&#8217;s personnel shop as an administrative specialist &#8212; a military occupation specialty that offers no bonus for re-enlisting. But this program, based on where soldiers were posted, was open to all job specialties.

Sgt. Maj. Robert Shields, 8th Army director of theater retention, said his office has been very busy processing applications of soldiers seeking the re-enlistment bonus. He said the office had just one day&#8217;s notice before the Army announced the program.

The bonuses are designed &#8220;to gain greater stability so there is less force turbulence,&#8221; he said.

How many soldiers will take advantage of the program remains unknown, as some may back out of re-enlistment even though their applications are approved, he said. Right now, he&#8217;s got &#8220;stacks&#8221; of applications, making September better than normal for re-enlistments, Shields said. &#8220;We&#8217;re certainly doing quite a few of them, much more than we would have done if there wasn&#8217;t a program.&#8221;

At the Army&#8217;s Camp Humphreys near Pyongtaek on Monday, career counselors said the bonus program&#8217;s impact varied, that some units still were unsure what their final re-up tallies would be.

There was little uncertainty, however, at the 6th Cavalry Brigade, where the bonus offer triggered a sharp surge in re-enlistments, said Master Sgt. Joni Evans, the career counselor.