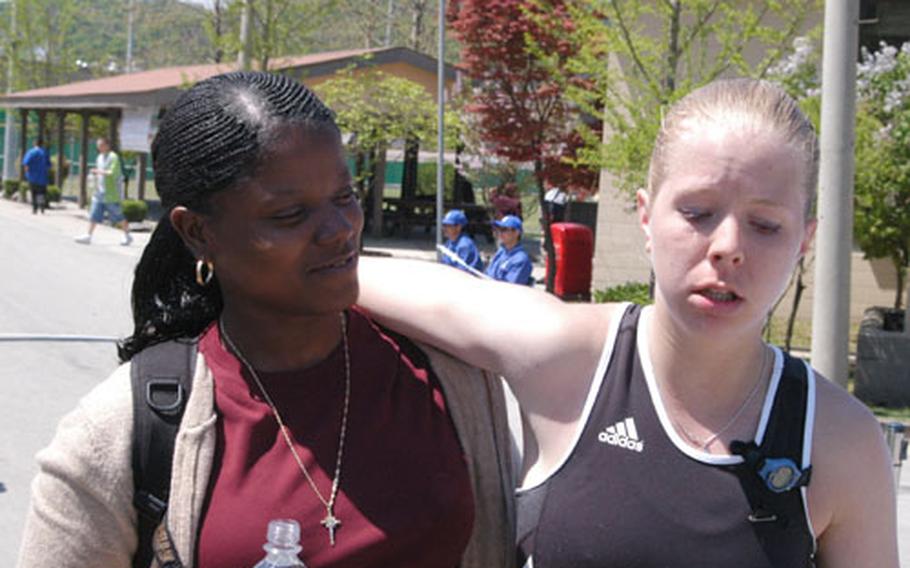 Spc. Heather George, who works with the Camp Casey-based 702nd Main Support Battalion, is assisted by a friend after winning the woman&#39;s 8th Army Marathon on Saturday. (Seth Robson / S&S)

Spc. Heather George, who works with the Camp Casey-based 702nd Main Support Battalion, is assisted by a friend after winning the woman&#39;s 8th Army Marathon on Saturday. (Seth Robson / S&S) 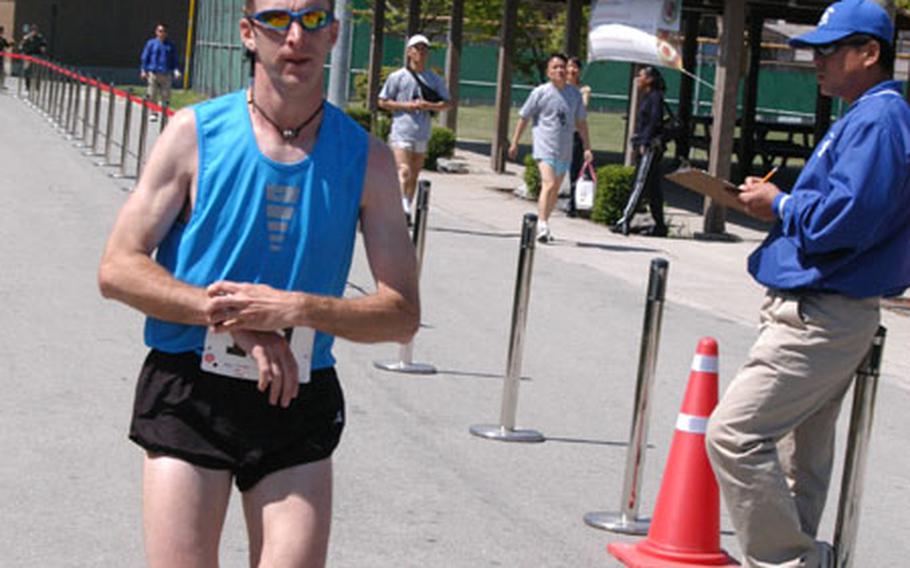 CAMP CASEY, South Korea &#8212; A backbreaking hill was the toughest part of the 8th Army Marathon and Half Marathon that drew 150 competitors to Camp Casey on Saturday.

The course took in most of the roads on Camp Casey and Camp Hovey and also included a section outside the camps, with stretches of slippery gravel, which ran up a steep hill. Marathon runners ran the course twice.

Spc. Heather George, who works with the Camp Casey-based 702nd Main Support Battalion, won the women&#8217;s event in 3 hours, 42 minutes. She was the favorite, having won the Incheon Marathon last month.

George also cited the hill as the toughest part of the Casey Marathon. &#8220;I felt like I was too slow and the hill just killed me. I really slowed down on the hill. I was trying to be as positive as I could and encourage myself to keep going,&#8221; she said, shortly after crossing the finish line.

George said she was disappointed she failed to improve on her 3 hour, 27 minute run at Incheon. &#8220;I feel like I have more left after this one than I did the first time. I don&#8217;t feel like I paced myself as well in this one. I was trying to go out slower, and I think that is what hurt me,&#8221; she said.

George said the all-Army running team is her next goal.

Pvt. Derek Batchelor of Headquarters Headquarters Company, 2nd Battalion, 9th Infantry Regiment, was so exhausted after running up the hill he decided to pull out of the marathon and finish at the half-Marathon mark.

Officials would not let Batchelor run down the half-marathon finishing straight because he was wearing a Marathon number pinned to his T-shirt.

One of the event&#8217;s organizers, Korea region sports officer Tom Higgins, said it was the eighth time the event has been run since 1996. The field included serious runners and people just trying to finish, he said.