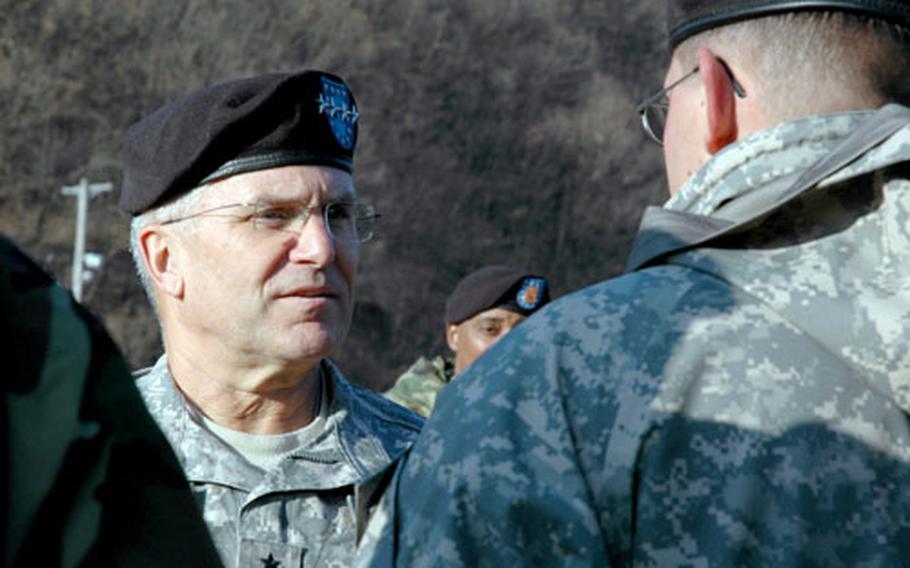 Sgt. First Class Chris Fick Jr., left, gives Gen. George Casey a tour of his apartment at Camp Humphreys on Friday. “I didn&#39;t get a master bedroom this size &#39;til I was a four-star,” Casey told Fick. (Ashley Rowland / S&S) 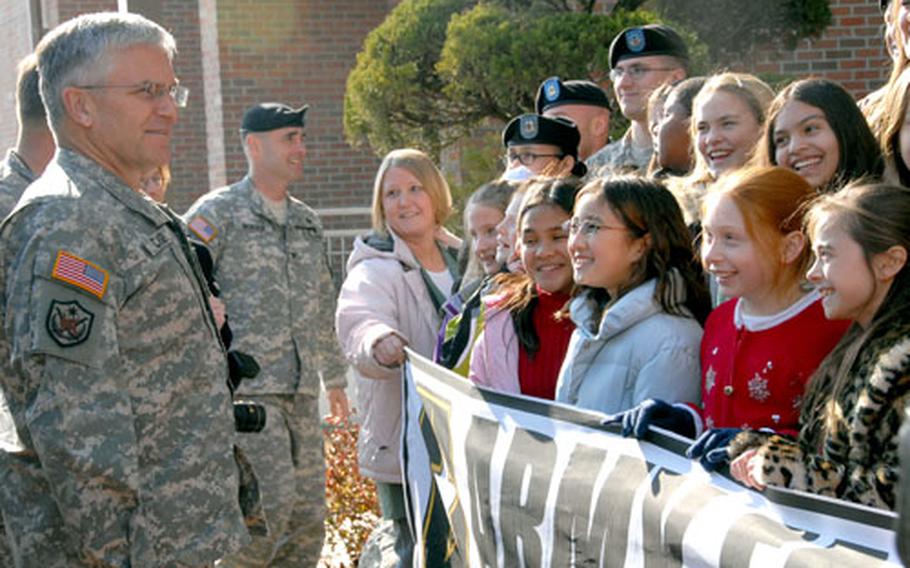 CAMP HUMPHREYS, South Korea &#8212; The Army&#8217;s top officer on Friday repeated the service&#8217;s warning that it likely will lay off 100,000 civilian workers soon to make up for budget shortfalls unless Congress passes a war funding bill before its Christmas recess.

&#8220;It&#8217;s our best guess right now,&#8221; Army Chief of Staff Gen. George Casey said Friday after meeting with soldiers at Camp Humphreys in Pyeongtaek to promote a new program aimed at helping Army families cope with the stresses of frequent deployments and war.

But Casey added that Congress could resolve the problem by passing a war funding bill for 2008. Nine brigades are returning from Iraq and Afghanistan this fall, and losing the civilian workers hurts them, he pointed out.

Casey, who commanded troops in Iraq for nearly three years, took over the Army&#8217;s top job in April. While in South Korea on Friday, he visited with soldiers at Camp Humphreys and with the Army&#8217;s 2nd Infantry Division near the Demilitarized Zone.

He used the time to promote the Army&#8217;s new Family Covenant program, which puts $1.4 billion toward quality-of-life improvements at bases and for military family members around the world.

The four-star general also reminded troops that the Army has lost some of its flexibility because of the push for more troops in Iraq. &#8220;The Army is stretched thin,&#8221; Casey told soldiers with the 6th Battalion, 37th Field Artillery Regiment at Camp Casey in Dongducheon. &#8220;The surge has sucked all the flexibility out of the system.&#8221;

Casey pointed to the problems at Walter Reed Army Medical Center as an example of the accumulative effects of fighting a long war within systems that sometimes are arcane. He asked the soldiers to look for ways to improve similar problems.

But Casey pointed to what he called Army improvements, too. He said the Army&#8217;s transformation from Cold War tactics to a more mobile, deployable force is 60 percent complete.

About 200 of the Army&#8217;s 300 brigades have been modified to the new paradigm, which is meant to speed responses to combat with self-contained fighting units. The transformation is scheduled to finish in another three years, he said.

Casey also reminded soldiers with the 2nd Battalion, 9th Infantry Regiment at Camp Casey to watch for signs of post-traumatic stress disorder among themselves and their friends. &#8220;We need to reduce the stigma,&#8221; he said, &#8220;so people get the treatment they need.&#8221;

The general was to have dinner Friday evening with troops at Camp Casey, which is named for Maj. Hugh Boyd Casey. The major died in the Korean War during a plane crash. Casey was to visit U.S. Forces Japan personnel over the weekend.