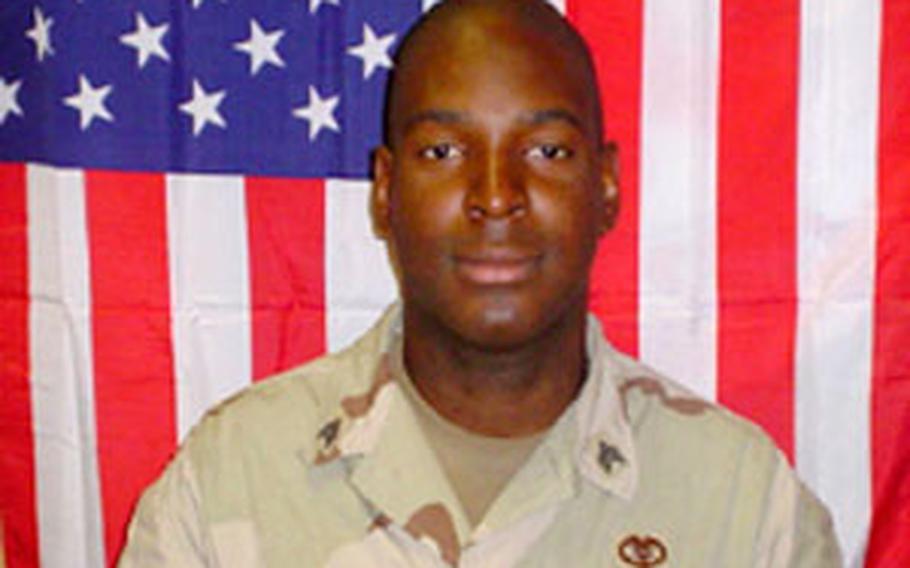 Staff Sgt. Damion G. Campbell, of the 1st Battalion, 508th Infantry Regiment, was killed Friday by a roadside bomb in Afghanistan. He was from Baltimore. (Diana Bahr / U.S. Army)

Staff Sgt. Damion G. Campbell, of the 1st Battalion, 508th Infantry Regiment, was killed Friday by a roadside bomb in Afghanistan. He was from Baltimore. (Diana Bahr / U.S. Army) VICENZA, Italy &#8212; Americans based at Caserma Ederle remembered Tuesday the 12th soldier from the Southern European Task Force (Airborne) killed in Afghanistan in the last 6&#189; months.

Staff Sgt. Damion G. Campbell died Friday when a roadside bomb detonated near the Humvee he was riding in. The 23-year-old from Baltimore was a member of the 1st Battalion, 508th Infantry Regiment.

Four other soldiers were injured in the attack. Two were released back to their units. One was listed in critical condition Friday in Afghanistan and the other was listed in stable condition, according to a CJTF-76 press release.

First Sgt. Mason Bryant spoke glowingly of Campbell during the memorial service Tuesday at the base chapel. He said Campbell was his platoon medic during the two years he served as a platoon sergeant in the battalion.

&#8220;I would dare say there was no better line medic in the brigade than Doc,&#8221; Bryant said, according to a transcript of his remarks. &#8220;I have seen Doc do everything from foot checks to treat gaping gunshot wounds without ever missing a beat.&#8221;

Bryant remembered Campbell as an avid spades player and someone who had &#8220;an insatiable sweet tooth.&#8221;

Campbell was awarded Army achievement medals for his actions as a medic and for finding an ammunition cache during Operation Rapid Guardian in Kosovo in 2001.