Secretary of Defense Ash Carter thanks Spanish Defense Minister Pedro Morones as he departs Moron Air Base. Morones offered on Monday that Spain was willing to keep its Patriot Battery in Turkey for an extended timeframe given the increased instability in Syria. (Tara Copp/Stars and Stripes)

Secretary of Defense Ash Carter thanks Spanish Defense Minister Pedro Morones as he departs Moron Air Base. Morones offered on Monday that Spain was willing to keep its Patriot Battery in Turkey for an extended timeframe given the increased instability in Syria. (Tara Copp/Stars and Stripes) 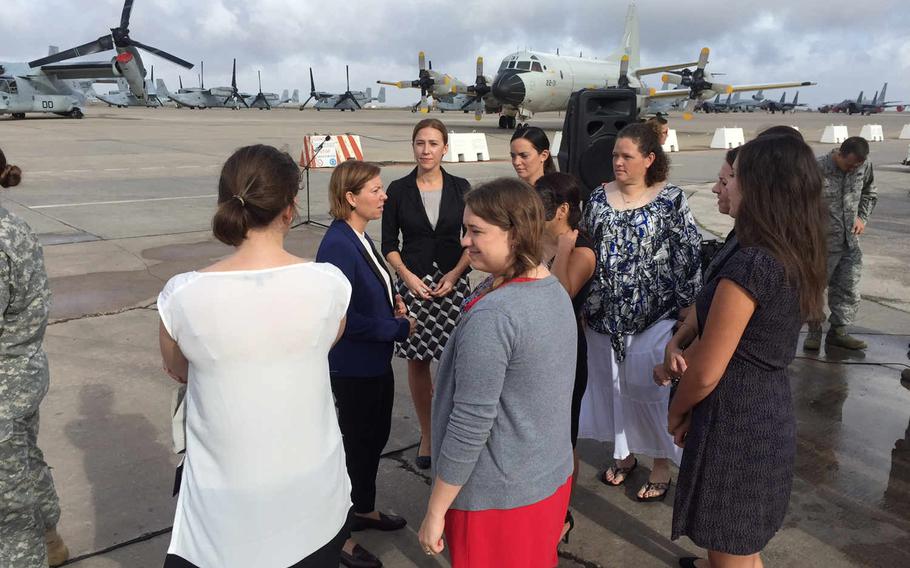 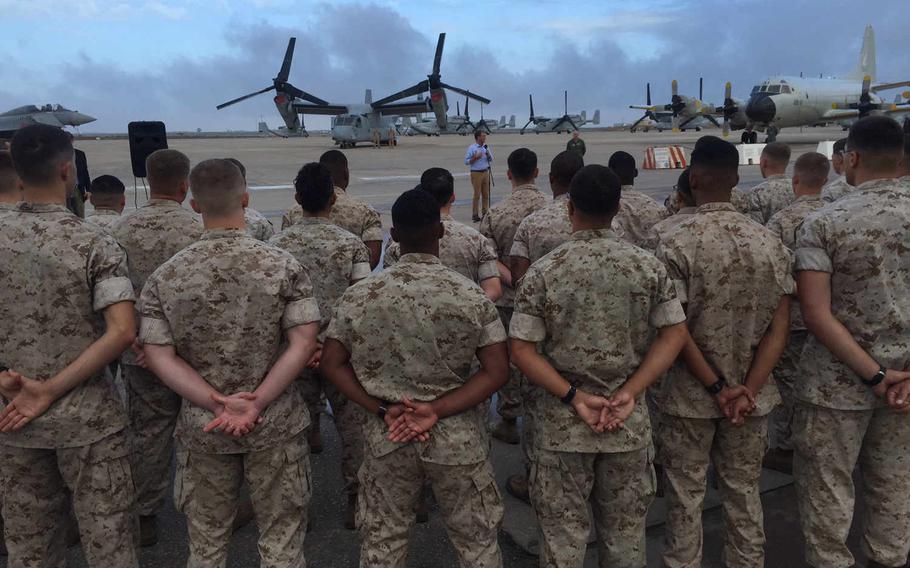 Secretary of Defense Ash Carter talks to U.S. Marines and Air Force personnel assigned to Morón Air Base, Spain, on Tuesday, Oct. 6, 2015. Morón will now permanently base up to 3,000 U.S. personnel and a complement of V-22 Ospreys and C-130 refuelers. (Tara Copp/Stars and Stripes)

“We will react,” Carter said, asserting that “their behavior needs to be checked.”

Carter’s comments followed reports of a second incursion by Russian fighters into Turkish airspace on Tuesday. While Carter could not confirm those reports, he said the U.S. and NATO would not tolerate additional violations.

“We will react,” he said. “And certainly the Turks will, and have said they will. So it is a serious matter, and we take it very, very seriously.”

On Saturday, a pair of Russian fighters entered Turkish airspace. Turkish fighters intercepted the overflight, which lasted about two and a half minutes, a senior U.S. official said.

NATO also reacted strongly to the incidents Tuesday, with Secretary-General Jens Stoltenberg accusing Russia of a deliberate incursion into alliance airspace and dismissing Moscow’s assertion that it was a mistake.

Russian and U.S. and coalition aircraft have continued their separate bombing campaigns over Syria in recent days, escalating the risk that miscommunication could lead to unintended collisions.

The U.S. is frustrated by what it says is Russia’s failure to respond to an initial round of deconfliction talks between the two countries’ senior defense staff last week over air operations in Syria. Those exchanges, held by video teleconference, resulted in a draft agreement that Washington sent to Moscow outlining the terms of safe flight — the frequency channels for communication, safe distance between aircraft and a common language for communication, a senior U.S. official said on condition of anonymity.

A U.S. official with Carter’s delegation said the Russian side had communicated to the U.S. Embassy in Moscow that they wanted to have another meeting to discuss technical matters. “We look forward to the formal response from the Russians and learning the details. We stand ready to meet again to continue our earlier discussion as soon as possible,” spokesman Peter Cook said.

The Russian news agency Interfax said Tuesday that the Russian Defense Ministry planned a second video conference with U.S. counterparts and that it would be “better if they visited us.”

The Russian Defence Ministry acknowledged on Monday that an SU-30 warplane briefly entered Turkish airspace along the border with Syria, a mistake it attributed to poor weather in the region. Moscow said it had provided a full explanation to Ankara.

Moscow says its jets have been bombing Islamic State targets throughout the past week, including command centers, communications hubs, ammunition depots, as well as tanks and other vehicles.

Russia maintains its air activities over Syria are being conducted at Syria’s official invitation and are hence within the framework of international law. In contrast, the U.S. and its allies have been conducting strikes in Syria without Damascus’ formal consent.

The U.S. was already planning on discussing Russia’s unilateral actions in Syria and their ramifications for the NATO alliance. The almost five-year war has caused a massive influx of refugees into Europe.

Allied ministers are also expected to approve plans crafted in response to a more assertive Russia on the alliance’s eastern flank and instability to the south. NATO will endorse a plan to double the size of its crisis-response force to 40,000 troops and will consider additional capabilities that may be needed in the south, Stoltenberg told reporters in Brussels.

In addition, two new NATO headquarters — small “force integration units” — will be established in Hungary and Slovakia to help NATO plan its growing number of exercises in eastern Europe.

The unease generated by Moscow’s actions in Syria is “going to cause us to strengthen our posture with respect to Russia,” Carter said. “It’s further evidence they are not thinking things through.”

Carter could not confirm news reports that Russia was sending thousands of “volunteer forces” into Syria for a potential ground campaign, but he said he thought Russian President Vladimir Putin was making a serious strategic error.

“Those people are going to come under attack,” Carter said, suggesting the Russian forces might be fired upon by opposition fighters already fighting President Bashar Assad on the ground.

Russia on Tuesday denied it had ground troops in Syria.