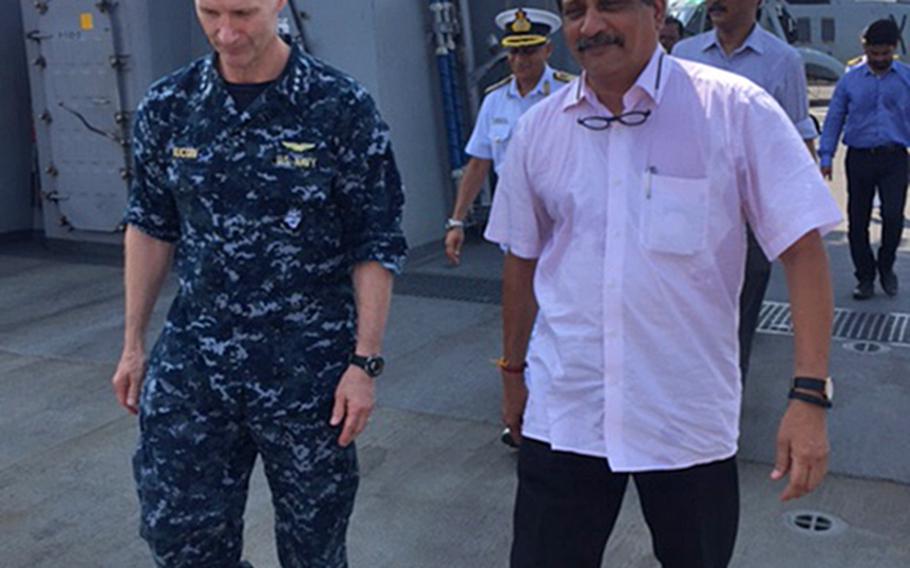 MORMUGAO PORT, India — Defense Secretary Ash Carter said Monday that India could become a key guarantor of security in the Asia Pacific region as it seeks to modernize its naval fleet.

India is planning to increase its naval fleet from 130 to 166 ships, including adding a third aircraft carrier, a senior Indian defense official said in a background briefing with reporters traveling with the defense secretary.

That will allow India to be a “net supplier of security in the region,” Carter told reporters aboard the USS Blue Ridge, the flagship of the U.S. 7th Fleet, after hosting Indian Defense Minister Manohar Parrikar. “That’s very compatible with our policy.”

Carter spent the morning with Parrikar on board the INS Vikramaditya, one of India’s two aircraft carriers.

India is rapidly expanding its naval fleet to be able to expand its role from one that has focused on anti-piracy and near coastal threats to one that now has an eye on China.

India wants to be able to respond to “any political, diplomatic or extremist unrest in the world,” the senior Indian defense official said.

U.S. ships and aircraft also have passed near the islands in recent months to ensure freedom of navigation, angering China.

Carter and Parrikar have been working on technology sharing terms that would help India acquire a third, U.S.-India co-developed carrier.

Undersecretary of Defense Frank Kendall has been in India for the last week in advance of Carter’s visit to finalize an agreement that would allow India and the U.S. to share catapult-launch technologies for aircraft aboard an Indian-U.S. produced carrier by 2028. An announcement on the terms of that agreement is expected Tuesday.

The U.S. has been expanding its naval presence in the region, 7th Fleet commander Vice Adm. Joseph Aucoin said. Many of the Navy’s new systems, including the Zumwalt class DDG-1000 destroyer, will be deployed in the 7th Fleet Area of Responsibility.

“There’s a big synergy between our two countries,” Aucoin said.