Carter: Time to think about post-military career is while still serving 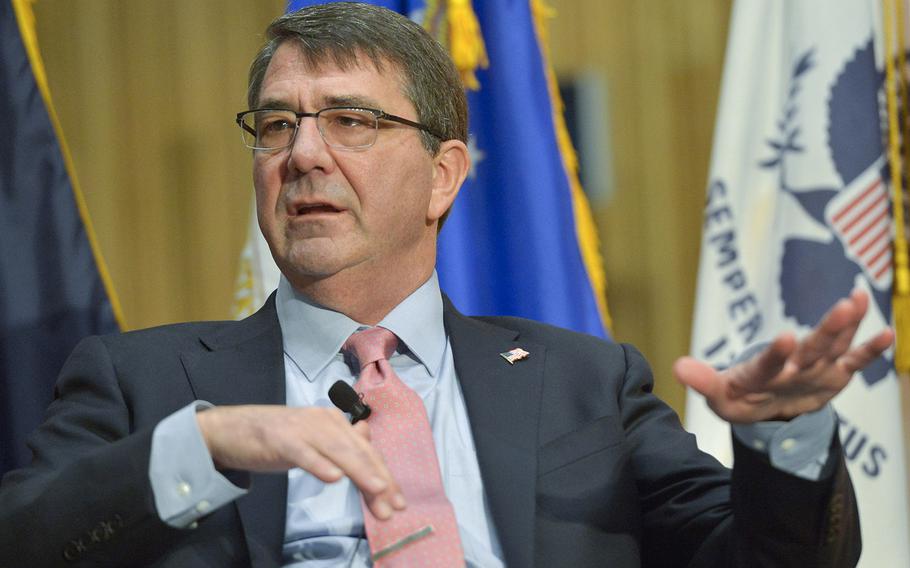 SYRACUSE, N.Y. — The Pentagon and servicemembers need to have a longer-term view when it comes to preparing troops for their post-military civilian careers, Secretary of Defense Ash Carter said Tuesday.

Carter talked about military transition at Syracuse University, the final stop on a trip that was focused on the Pentagon chief’s ideas for building “the force of the future.”

“When you become a veteran, to me, that is a loss for [the military] but a gain for the country, because I think our people are some of the most promising, constructive, well-contributing citizens we have,” the told students. “It’s best for them and therefore best for country if they start thinking about life after the military [as soon as] they’re in the military.”

For those who leave the service, DOD leaders are trying to ease the transition by addressing a leading concern: jobs.

Syracuse University is home to the Institute for Veterans and Military Families, which is focused on tackling the economic, social and policy concerns.

While at Syracuse, Carter held a roundtable discussion with IVMF leaders to discuss a new initiative called “Onward to Opportunity,” designed to help transitioning servicemembers and families acquire the skills they need to land good jobs in the private sector. The program, which will be piloted at Joint Base Lewis-McChord, Wash., and five other yet-to-be-determined military installations later this year, will provide industry-specific training and job placement services for troops and spouses.

IVMF is partnering with DOD, the Schultz Family Foundation and the private sector on the project.

The training curriculum will be delivered using classroom and distance learning during the months before separation, according to IVMF executive director Michael Haynie. The initial training will focus on the technology and service industries.

“The idea here is to look at the private sector and what the private sector has to offer with regard to expertise to support design, development and training to close that skills gap, particularly related to civilian careers that really are in demand in the labor market … in way that really maximizes their opportunity to be job-ready,” he told Stars and Stripes in a phone interview before Carter’s visit.

Once participants finish the training and pass certification tests, they will be eligible for placement into jobs with employer partners.

Carter strongly supports the IVMF initiative, but he made it clear in his speech that efforts to prepare troops for civilian careers need to start well before they are getting ready to leave the force.

Earlier in the national trip, the head of DOD floated the idea of expanding pilot programs that let people pause their military careers while they’re getting a degree or starting a family, as well as giving them more flexibility and choice in deciding their next job in the military.

“If we’re going to have a new generation, we have to offer them that,” Carter said Tuesday. “We can’t offer them a conveyor belt, where you get on and you just don’t move until you get off.

“This transition is not a phenomenon for the end of service, it’s for the entire duration of service.”