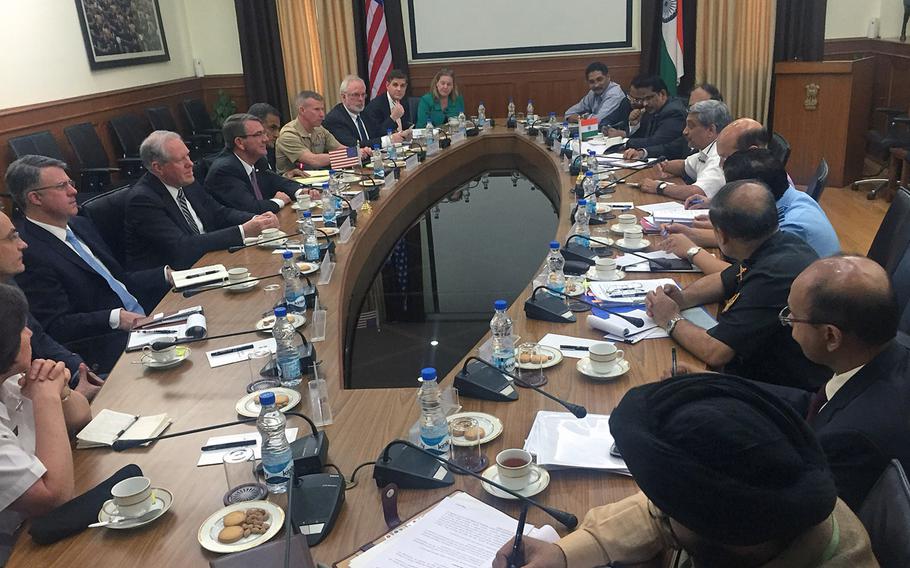 Secretary of Defense Ash Carter And Indian Defense Minister Manohar Parrikar and their staffs met Tuesday, April 12, 2016, in New Delhi, India, to discuss details of technology sharing and base sharing agreements the two sides have worked on for the last 10 years. The two sides said they "agreed in principal" to assist each other in logistical support. (Tara Copp/Stars and Stripes)

NEW DELHI, India — At the end of a three-day visit by Secretary of Defense Ash Carter to India, the two countries announced progress in some logistics- and technology-sharing programs but fell short on other key issues, including co-development of a future Indian aircraft carrier.

At a news conference Tuesday, Carter and Indian Defense Minister Manohar Parrikar said they have agreed “in principle” to common logistics policies that will allow the increasing number of joint military exercises to proceed without new negotiations. Parrikar and Carter said they expect a memorandum of understanding on this issue to be signed in the next several weeks.

The two sides also came to agreement on other projects included under a U.S.-India technology initiative Carter established last June. These include a project to share technology on digital mounted-helmet displays and biological tactical detection systems, which warn of and test for biological warfare agents. The helmet technology is a key component of India’s stated desire to obtain advanced fighter jets, while the detection system could assist India’s counterterrorism efforts.

But the visit, which centered on talks about the modernization of the Indian navy and its increasing role in helping stabilize the region, also revealed the reluctance of the host country — traditionally a major nonaligned nation — to officially tie itself more closely to the United States.

U.S. officials who traveled with Carter to India told reporters that the hesitation resulted from the fact that the two nations started aggressively pursuing a close military relationship only in the last few years.

“We are learning how to converge strategically,” one official said. “It will take time. And it’s about building trusted relationships … and going at a pace that our Indian counterparts — and that we — feel is appropriate.”

At the news conference, Indian journalists asked why India should treat the U.S. as a trusted partner when Washington had just announced the sale of F-16 fighter jets to its rival, Pakistan.

Also, while Washington and New Delhi have been very vocal about sharing technology and co-developing a new Indian aircraft carrier, India has not been asked to conduct joint patrols with the U.S. in the South China Sea, where Beijing has militarized a string of new man-made islands.

During Carter’s visit, the two sides failed to reach consensus on sharing catapult launch technology, one of the critical pieces of equipment needed for India to move ahead on its carrier, which it plans to add to its fleet of two by 2028.

Defense officials who briefed reporters traveling with Carter said the two sides are working on an information exchange that will enable future rounds of discussion on the carrier technology.