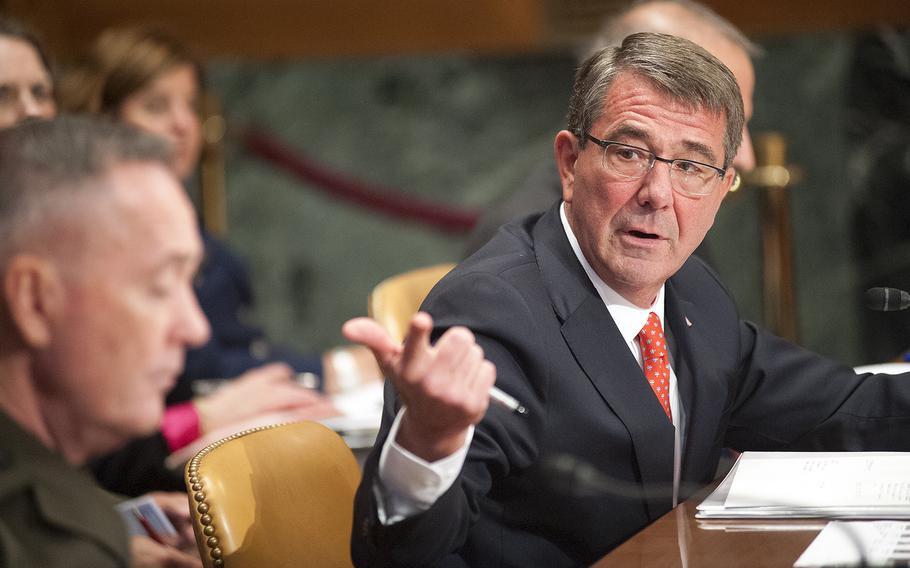 Defense Secretary Ash Carter drives home a point while testifying before the Senate appropriations subcommittee for defense on Wednesday, April 27, 2016, as Marine Corps Gen. Joseph Dunford, the Chairman of the Joint Chiefs of Staff listens in the foreground. (Carlos Bongioanni/Stars and Stripes)

Carter railed against a proposal by Rep. Mac Thornberry, R-Texas, to move $18 billion from the Pentagon’s war coffers to its base budget, a plan that the House Armed Services Committee chairman said would fund the acquisition of weapons systems including fighter jets and Navy ships and increase the number of active-duty troops.

The Pentagon did not ask for the weapons systems or the troop increases that Thornberry proposed, Carter told the Senate appropriations subcommittee for defense, calling the plan “deeply troubling and flawed.”

“It’s gambling with warfighting money at a time of war — proposing to cut off our troops’ funding in places like Afghanistan, Iraq and Syria in the middle of the year,” Carter said.

Congress is restricted to a budget deal signed in November to limit defense spending in 2017 to $610 billion.

Thornberry’s proposal, largely driven by his belief that the White House has not properly funded the nation’s military, would end the funding of the Pentagon’s war fund, called Overseas Contingency Operations, in April. That would leave it up to the next president to request war funds from Congress.

The Thornberry proposal would add 27,000 active-duty troops to the Pentagon’s requested troop level and provide them a 2.1 percent pay raise; the November budget deal calls for a 1.6 percent raise. It would also provide $3 billion for 14 new F/A-18 Super Hornet jets and 11 more F-35 Joint Strike Fighters and give an additional $2 billion to the Navy’s shipbuilding budget.

“It would spend money on things that are not [the Defense Department’s] highest unfunded priorities across the joint force,” Carter said. “It buys force structure without the money to sustain it and keep it ready, effectively creating hollow force structure, and working against our efforts to restore readiness.”

The plan could hurt the Bipartisan Budget Act, which has provided the Pentagon a boost in fiscal stability, Carter said. Thornberry’s plan could be a step toward the return of sequestration and its automatic $100 billion in defense cuts, Carter warned.

Thornberry’s proposal is “a step in the direction of unraveling the Bipartisan Budget Act. ... And it’s another road to nowhere, with uncertain chances of ever becoming law, and a high probability of leading to more gridlock and another continuing resolution, exactly the kind of terrible distraction we’ve seen for years, that undercuts stable planning and efficient use of taxpayer dollars, dispirits troops and their families, baffles friends, and emboldens foes,” he said.