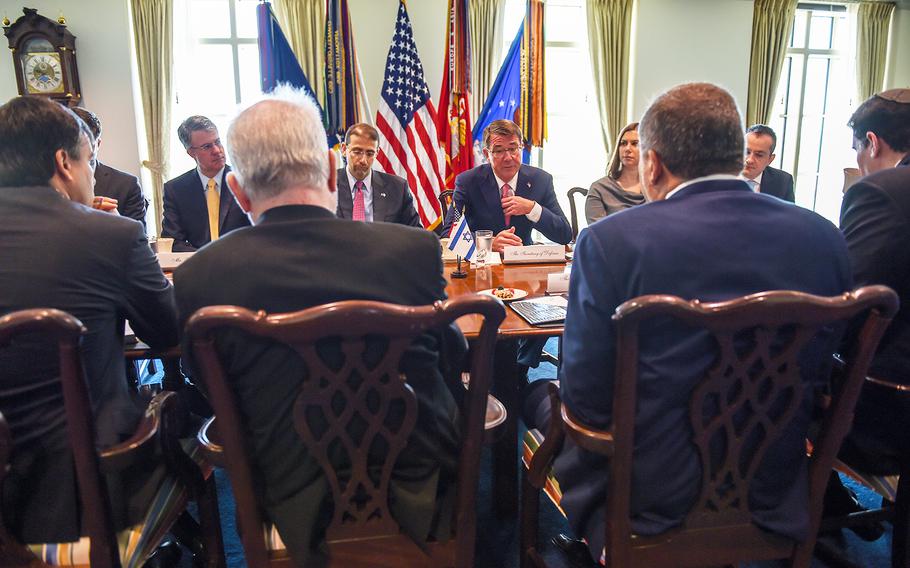 WASHINGTON — The Islamic State group is losing its battles for territory in Iraq and Syria, but the most recent mass shooting on American soil inspired by the terrorist organization underscores the need to accelerate the U.S.-led campaign, Defense Secretary Ash Carter said Monday.

Carter, once again, called on America’s military partners in the fight against the Islamic State to do more to hasten the campaign against the terrorist group, in a speech during the Center for a New American Security’s annual conference in Washington, D.C. that focused largely on the strategic importance of U.S. military allies across the globe.

Fighting terrorism, namely the Islamic State group, is one of five key global security endeavors for the United States, Carter said. The attack last week by a gunman on an Orlando nightclub that left 49 dead and more than 50 others injured was reportedly inspired by the terrorist group. The mass shooting only reinforces the existing influence of Islamic State, even as its been corralled in Iraq and Syria, where the group has lost massive amounts of territory.

“Last week’s tragic shooting in Orlando underscores the urgency,” Carter said Monday. “...It reminds us that (the Islamic State group) not only tyrannizes the populations where it arose in Iraq and Syria, but it also wants to spread its evil ideology, and to plot or inspire attacks on Americans, including here at home.”

The June 12 attack was at least the second mass shooting on American soil carried out by a gunman who officials have said pledged allegiance to the Islamic State group’s leader, Abu Bakr al-Baghdadi. The group has also directed high-profile attacks in European cities, including Paris and Brussels.

CIA Director John Brennan last week told Senate intelligence committee members that the Islamic State has not lost its abilities to export terrorism, though the fight against the group has been successful in Iraq and Syria, where its force has been reduced from about 33,000 fighters last year to 18,000-to-22,000 today.

“Our efforts have not reduced the group’s terrorism capability and global reach,” he said.

Recent U.S. airstrikes, Carter said Monday, have killed about 20 of the Islamic State group’s “external operators,” who were believed to be “actively plotting to attack our friends and allies and America’s own men and women in uniform.”

Carter did not provide specific examples of further steps that could be taken to accelerate the campaign against terrorism. He will host the defense ministers of all 30 nations involved in the campaign against the Islamic State group next month in Washington “to plan and resource our next steps.”

Those steps are likely to focus largely on pushing forward with the coalition’s top objectives – to eliminate the militants from their two main strongholds in Raqqa, Syria and Mosul, Iraq.

The United States has continually increased its contributions to its fight against the Islamic State, adding hundreds of special operations advisers on the ground in Syria and Iraq, launching unilateral raids on high-priority targets, adding artillery and most recently conducting an offensive strike with an Apache attack helicopter. Carter has also proposed embedding American advisers in further with front-line Iraqi units as they approach Mosul.

Carter included the push toward Mosul among three ongoing operations that have, so far, been considered successful. The other two are the battle to recapture Fallujah in Iraq’s Anbar Province and the fight to capture Manbij City, a key smuggling point for Islamic State fighters and supplies in northern Syria near Turkey’s border.

“The counter-(Islamic State) campaign is an example of what we can do when working with local and global partners,” Carter said. “…But Orlando is a reminder that all nations must do more to defeat (the Islamic State). The sooner we deliver it a lasting defeat, the safer we’ll make our homelands and our people.”