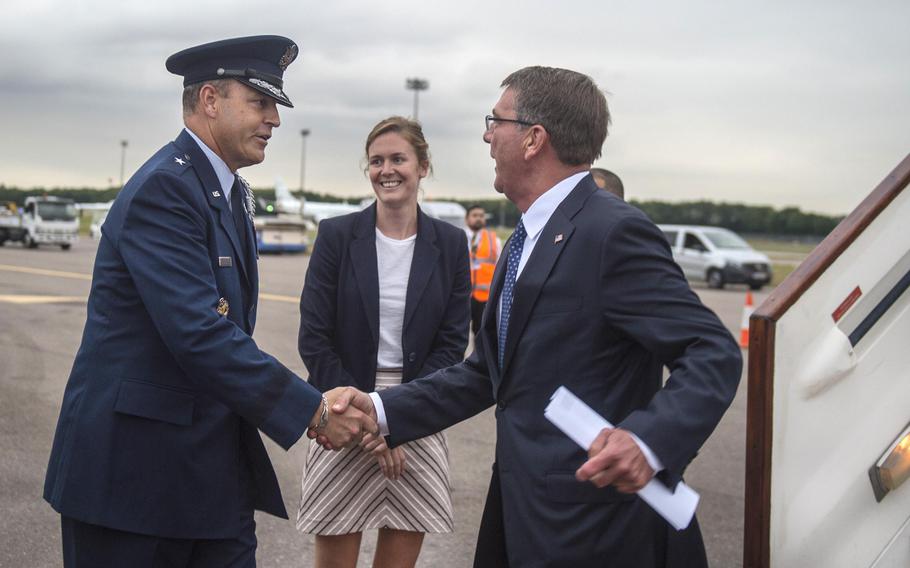 A monthlong U.S. air campaign against the Islamic State in Libya has helped back the group into “a single neighborhood” in its coastal stronghold of Sirte, where an ongoing offensive seeks to dislodge the militants from their strategic foothold, Defense Secretary Ash Carter said Wednesday.

The campaign in Libya, along with intensified operations in Iraq and Syria, is a step in delivering a “lasting defeat” to the group, Carter said during a speech at Oxford University in Britain.

“They are still a dangerous adversary, and a lasting defeat will take time, but we will not let up until ISIL is defeated,” said Carter, using an alternate acronym for the Islamic State.

Carter’s visit to the United Kingdom, where he held talks with top officials, including Prime Minister Theresa May, comes during a time of political turmoil in the country in the wake of a referendum to leave the European Union. Carter, along with President Barack Obama, had urged British voters to elect to stay in the EU, citing the need for political cohesion and unity.

On Wednesday, Carter said that despite the exit vote, the U.S. continues to view the U.K. as a key ally and partner in security operations in places like Iraq.

“That is true before the Brexit vote and it is true today after the Brexit vote,” Carter said. “I am confident the U.S. and the U.K. will now focus on the future, and that is what I am doing.”

Carter praised London for its contributions in the U.S.-led coalition taking part in operations in Iraq and Syria, but he issued a warning to partners who have taken a back seat.

“We’ve made it clear there are no free riders,” Carter said of the coalition. When the war against the Islamic State is over, “collectively we will remember who failed to show up for the fight.”

Carter highlighted two primary challenges during his speech: a more aggressive Russia that seeks to “erode the international order” and the threat of terrorism as the Islamic State group metastasizes.

In the case of Russia, Carter touted the U.S.’ enhanced military presence in Europe as a signal that it stands with its NATO allies and is ready to defend alliance territory if pushed.

“The United States does not seek a cold war, let alone a hot war with Russia,” he said. “Also make no mistake, we will defend our allies.”

Some NATO members, particularly the Baltic states that border Russia, have voiced concern about Moscow’s aggressive moves in the Ukraine as a sign of Russia’s larger territorial ambitions. Moscow, however, has repeatedly denied any intent to challenge NATO territory and has criticized the U.S. for its growing presence in the Baltics and Poland, saying it threatens Russia’s tiny enclave of Kaliningrad.

Carter, who heads to Norway on Thursday for high-level talks, said a new U.S. military posture in Europe focused on deterrence was a reaction to Russia’s own provocative maneuvers.

“We haven’t had to prioritize deterrence on NATO’s eastern flank for over 25 years; unfortunately now we do,” Carter said.