Carter at West Point: Force of the Future reforms will continue 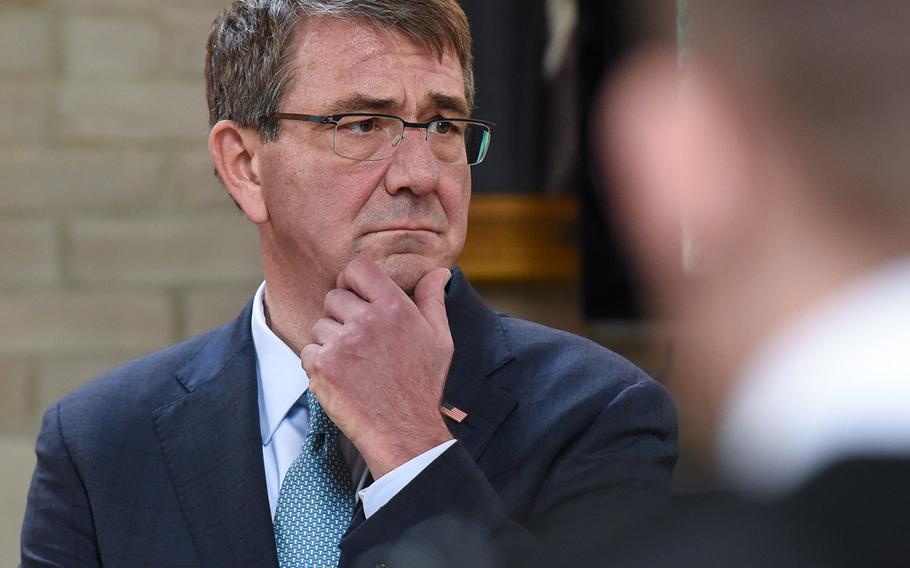 Defense Secretary Ash Carter speaks with West Point faculty during his trip to the U.S. Military Academy on March 23, 2016. (Corey Dickstein/Stars and Stripes)

Defense Secretary Ash Carter speaks with West Point faculty during his trip to the U.S. Military Academy on March 23, 2016. (Corey Dickstein/Stars and Stripes) Defense Secretary Ash Carter eats lunch with West Point cadets who will graduate in May during his trip to the U.S. Military Academy on March 23, 2016. (Corey Dickstein/Stars and Stripes) Defense Secretary Ash Carter speaks with West Point cadets and an instructor in a physics lab at the U.S. Military Academy on March 23, 2016. (Corey Dickstein/Stars and Stripes)

During a visit to the U.S. Military Academy at West Point, N.Y., Carter told the institution’s 4,400 cadets that his proposals would ensure the military in which they will soon be officers will be capable of recruiting and retaining the most talented people to serve.

Questions about the future of his programs were raised this month after Brad Carson, the acting undersecretary of defense, announced he will leave his post next month following a difficult confirmation hearing in front of the Senate Armed Services Committee.

“I respect Undersecretary Carson’s decision not to pursue confirmation, but he and his office have done excellent work with respect to the Force of the Future,” Carter told reporters traveling with him at West Point. “I’m completely committed to the force of the future.”

The proposals have been criticized by some members of Congress, including Sen. John McCain, R-Ariz., who called them “ an outrageous waste of time and resources.”

Carter rolled out the “first tranche” of personnel reforms in November, which included mid-career sabbaticals, high-tech industry fellowships and changes to the retirement system.

The reforms were backed by much of the Pentagon leadership, Carter said.

“When we’re doing something that clearly makes good sense for the country and we’ve shown the way and we’ve articulated and explained why it makes sense — everybody in the department knows that it makes sense,” Carter said. “I’m confident that those things will stick, because they clearly will make a better military and they have logic and support.”

Additional reforms are in the works, he said Wednesday. Those proposals are likely to include a call to overhaul laws governing the way military officers are promoted.

“It’s important to act with resolve and not wait,” Carter said, stopping short of predicting they’d be completed before he leaves office. “But it’s also important to do it thoughtfully.”

During his visit to West Point, Carter’s first as defense secretary, he met with cadets, toured a physics laboratory and received classified briefs on the academy’s cyber and counter-terrorism programs.

The defense secretary told the cadet corps, all millennials who will commit to serving in the Army for several years upon graduating from the academy, that their generation will demand reforms to the military more than past generations.

Cadets generally agreed with that assessment, said Cadet 1st Capt. EJ Coleman, who will graduate in May and commission as an artillery officer.

“A lot of people in my generation are looking for different opportunities,” Coleman said, calling millennials the “social media” generation.

“I think they are looking for some flexibility,” the cadet said. “Yes, this is the military, and it’s not going to change abruptly, the Army has rigid structure and that’s good, but there are great positives to having some options in the military.”