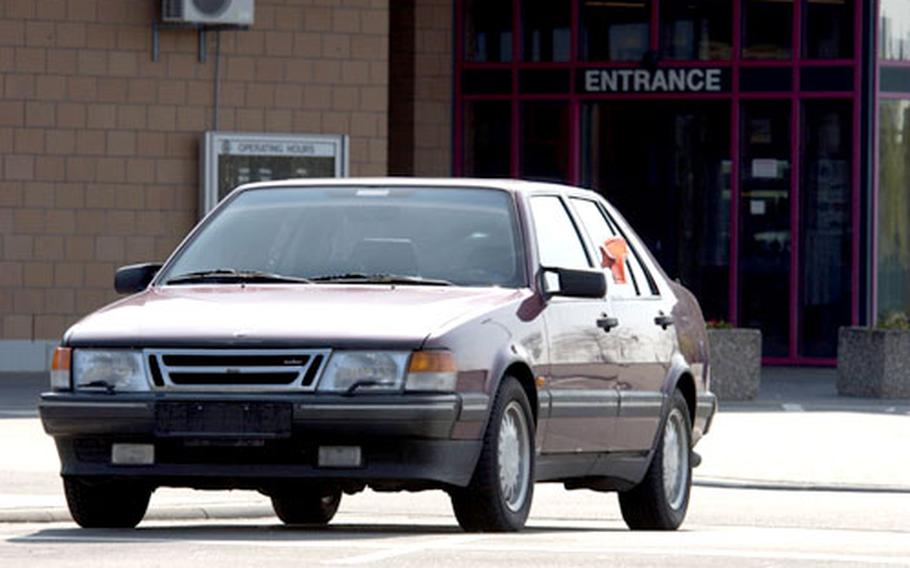 This Saab has been parked in this spot near the entrance to the commissary at Benjamin Franklin Village in Mannheim, Germany, for at least a month. (Greg Davis / Courtesy to S&S)

Without license plates, bearing tickets so old the writing has faded away, orange warning stickers and/or notices that the license plates have been confiscated &#8212; and at least one with a flat tire &#8212; all these vehicles appear to be abandoned. And all appear to be abandoned in prime parking spots that drivers like Greg Davis could really use.

Davis, who was a military combat photographer and was assigned to work for Stars and Stripes in South Korea three years ago, said he knows the cars aren&#8217;t the world&#8217;s biggest problem. But they are annoying.

Now a freelance photographer and full-time househusband, Davis does his errands accompanied by his 9-month-old daughter. Every time he goes to the cleaners, commissary or shoppette, he must remove his daughter from her car seat and take her with him. It&#8217;s a lot easier if the parking spot is close, especially when his daughter is asleep, he said.

But so far, Davis, who said he noticed two more apparently abandoned cars in housing areas on Friday, has gotten little response.

&#8220;I&#8217;ve talked to a number of MPs (military police). I&#8217;ve mentioned it to the shoppette manager. I talked to the area installation coordinator, and when he didn&#8217;t have any answers, I talked to the deputy commander of Army Garrison Mannheim,&#8221; Davis said.

The shoppette manager said he&#8217;d never noticed the car, Davis said. The area installation coordinator, he said, told him it costs $35 to tow each car and has to be done through morale, welfare and recreation.

Davis said Sturgeon also told him it costs $75 to tow each car.

But the process to remove an abandoned car has nothing to do with the budget, according to Kim Walz, chief of public affairs for the Installation Management Agency-Europe. In fact, USAREUR has a regulation specifically to deal with the issue.

According to Army in Europe Regulation 190-1, once a vehicle is determined to be abandoned, the car&#8217;s owner is given a 24-hour warning notice to move the vehicle. If the car isn&#8217;t moved, then the car is moved to a holding lot and a series of steps is taken to identify the vehicle&#8217;s owner. According to the regulation, once all of these steps have been taken, the car ends up at the Defense Reutilization and Marketing Office, where it is disposed of.

Italian officials believe they have found a solution to the same problem. On March 1, the Naples-based Central Motor Vehicle Registration Office announced that servicemembers could no longer use a power of attorney to sell cars. The thinking, according to Lt. Cmdr. David Murree, was too many people were leaving &#8220;junkers&#8221; behind.

Back in Germany, Sieg Heppner, a USAG Mannheim spokesman, said the base doesn&#8217;t have a problem with abandoned cars.

Heppner directed questions to Gregory Terry, director of logistics. But reached by phone, Terry said, &#8220;I&#8217;m not the one to talk to. The deputy garrison commander would be. I don&#8217;t tow abandoned vehicles.&#8221;