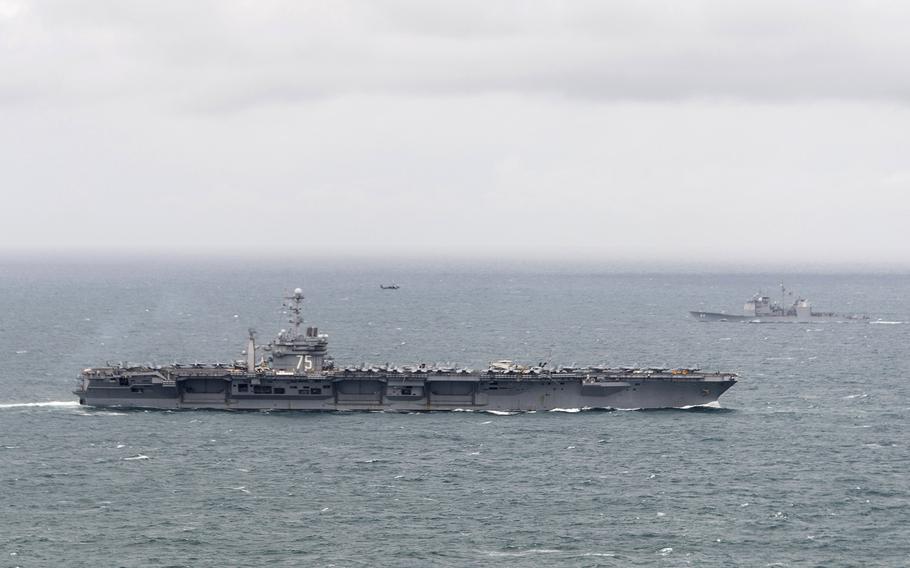 The aircraft carrier USS Harry S. Truman and the guided-missile cruiser USS Vicksburg participate in a training exercise in preparation for a future deployment in the Atlantic Ocean, Sept. 18, 2015. The Truman was to sail Monday from Norfolk, Va., for a scheduled seven-month deployment to the Middle East. (K. H. Anderson/U.S. Navy)

The aircraft carrier USS Harry S. Truman was to sail Monday from Norfolk, Va., for a scheduled seven-month deployment to the Middle East.

The primary mission for the carrier and its strike group of five ships, embarked air wing and roughly 5,000 sailors will be to provide air support for American military operations in Iraq and Syria, where the U.S. is leading a coalition against the Islamic State group. Truman will replace the USS Theodore Roosevelt, which departed the Persian Gulf in early October.

The deployment comes days after Islamic State militants carried out an attack in Paris that killed at least 132 people and raised new concerns about the group’s sophistication and infiltration in Western Europe.

Plans call for Truman to transit through European waters on its way to the Middle East.

The gap between the Roosevelt’s departure from the Middle East and the arrival of the Truman marks the first time the Navy has lacked a carrier in the region since 2007. The gap comes during a time of increased tensions in the region, including Russian military involvement in Syria, ongoing fighting in Iraq and a civil war in Yemen.

Although some analysts and politicians have criticized the gap as placing limits on military options, the Navy says it is necessary to stabilize the carrier deployment schedule and bring down deployment lengths.

The guided-missile destroyer USS Ramage was also scheduled to depart Norfolk on Monday for an independent, eight-month ballistic missile defense deployment to the Middle East.