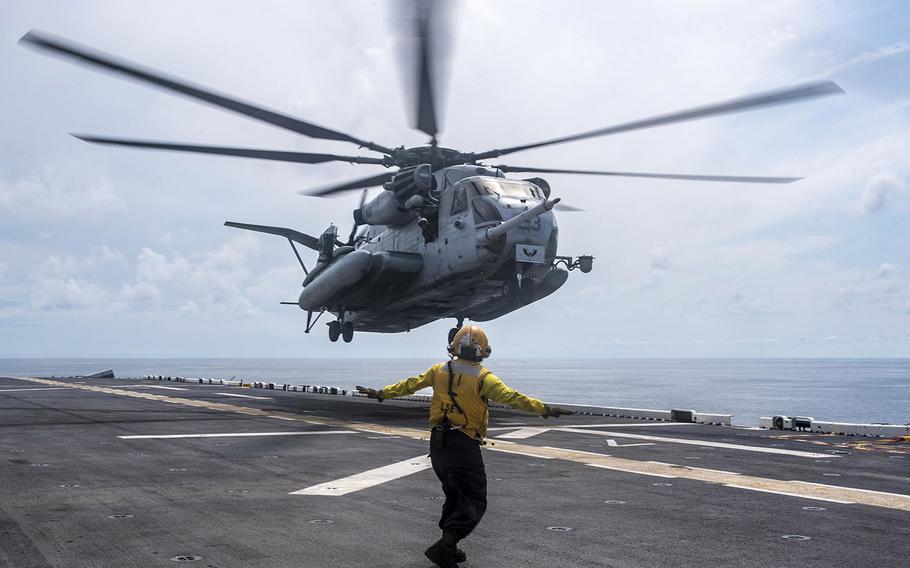 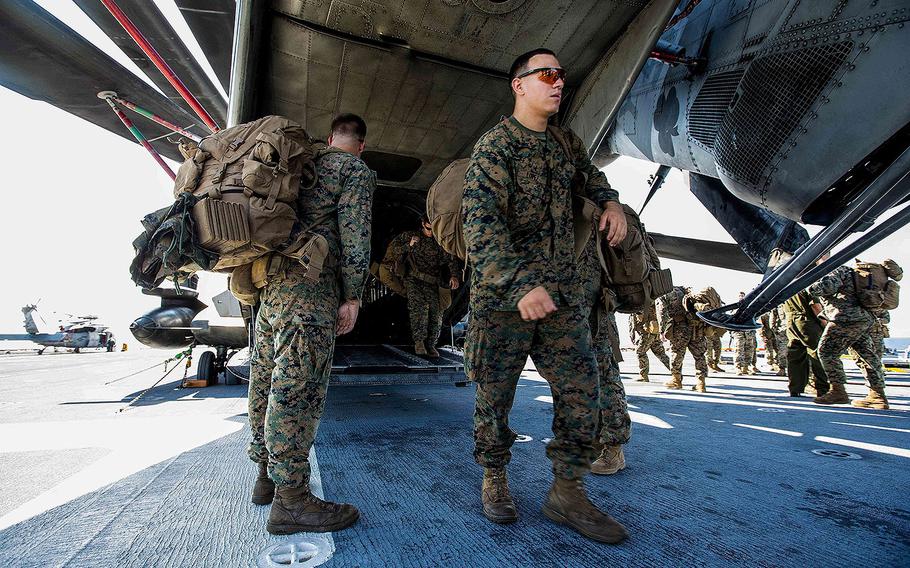 Airmen assigned to the 105th Airlift Wing and 106th Rescue Wing load two HH-60 Pavehawk helicopters onto a C-17 Globemaster III at Gabreski Air National Guard Base, West Hampton Beach, New York Sept. 7, 2017. The helicopters were used to rescue victims of the devastation caused by Hurricane Irma in the Caribbean, less than a week after the two units responded to Hurricane Harvey together. (Julio A. Olivencia Jr./U.S. Air Force) 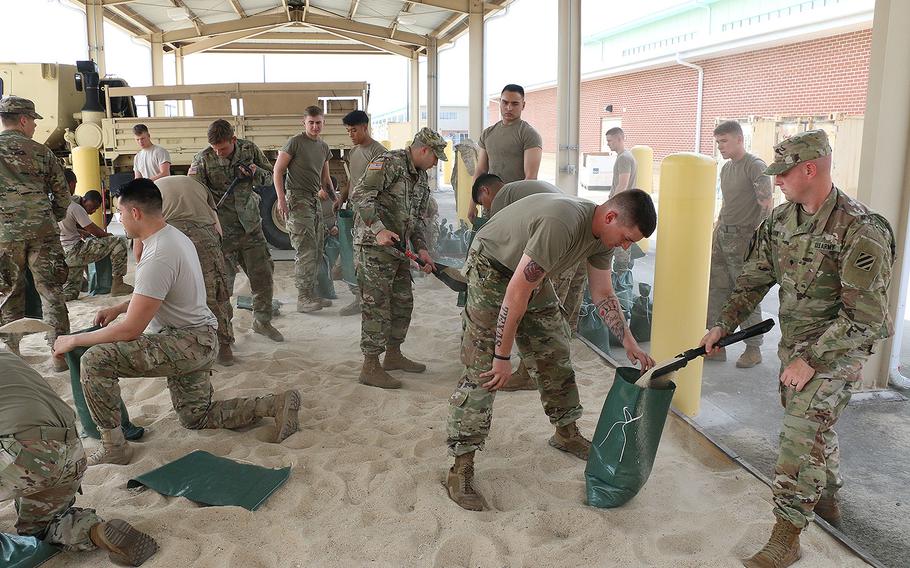 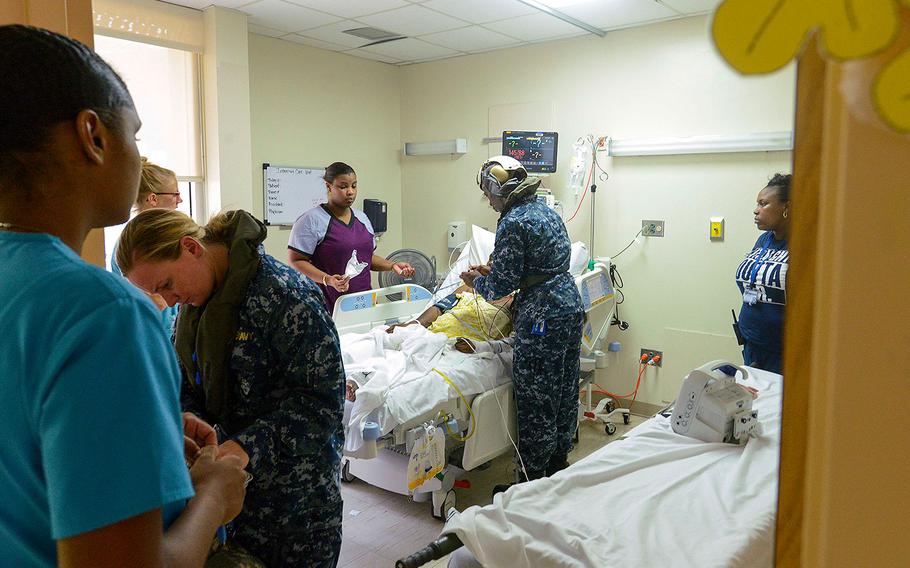 WASHINGTON – The U.S. Navy prepared seven warships including an aircraft carrier, and the National Guard readied nearly 20,000 servicemembers to respond to areas in Hurricane Irma’s path as the storm reached Cuba on Friday en route to Florida, defense officials said.

Despite its downgrade to a Category 4 storm, the National Hurricane Center said Friday that the storm remained “extremely dangerous” with sustained winds of 150 mph and was expected to hit the Florida mainland early Sunday as a “major” and “life-threatening” hurricane. Already, Irma has killed at least 19 people, authorities said.

Friday morning, a Navy amphibious ship was conducting operations in the eastern Caribbean in areas earlier struck by the storm, and about 5,800 Guard members in Puerto Rico and the U.S. Virgin Islands were responding in those U.S. territories to areas struck while Irma was still a Category 5 hurricane.

The USS Wasp was in the U.S. Virgin Islands, where aircraft aboard the amphibious assault ship were evacuating critically injured patients from St. Thomas to St. Croix, according to a U.S. Northern Command statement. The Wasp has medium- and heavy-lift helicopters aboard to transport people and supplies.

Meanwhile, the USS Kearsarge, another amphibious assault ship, and the USS Oak Hill, an amphibious dock landing ship, steamed toward that area carrying Marines with the 26th Marine Expeditionary Unit to aid islands already struck by the storm including the Turks and Caicos Islands, Hispaniola, St. Thomas, Barbuda, St. Martin and St. Barthelemy, commonly known as St. Barts. The Kearsarge and Oak Hill were expected to reach the area sometime Friday, a Navy official said.

Four more Navy warships are expected to join the other three soon in the Caribbean Sea.

The Navy on Thursday loaded the USS Iwo Jima, another amphibious assault ship, and the USS New York, an amphibious transport dock ship, with food and supplies at Naval Station Norfolk in Virginia in preparation to embark south toward areas impacted by Irma, Navy officials said. It was not clear Friday when they would leave port.

They will be joined by the aircraft carrier USS Abraham Lincoln and the USS Farragut, an Arleigh Burke-class destroyer, to deploy south in case they are needed, said Lt. Cmdr. Brian Wierzbicki, a spokesman for Navy’s Fleet Forces Command.

As the storm continued toward the U.S. mainland, military officials at installations from Key West, Florida north into South Carolina chose to evacuate their servicemembers.

Additionally, Naval Station Kings Bay, a submarine base on Georgia’s coast near the Florida border, issued a voluntary evacuation.

Pentagon officials said Friday that they anticipated the military’s response to Irma could grow larger than its mobilization in the wake of Hurricane Harvey, which hit coastal Texas on Aug. 25 as a Category 4 storm and dropped more than 50 inches of rain on the region. More than 17,000 servicemembers participated in the response to Harvey and some 3,000 National Guard members were still on duty in Texas on Friday, according to a Pentagon statement.