Carrier Air Wing 5 back at Atsugi 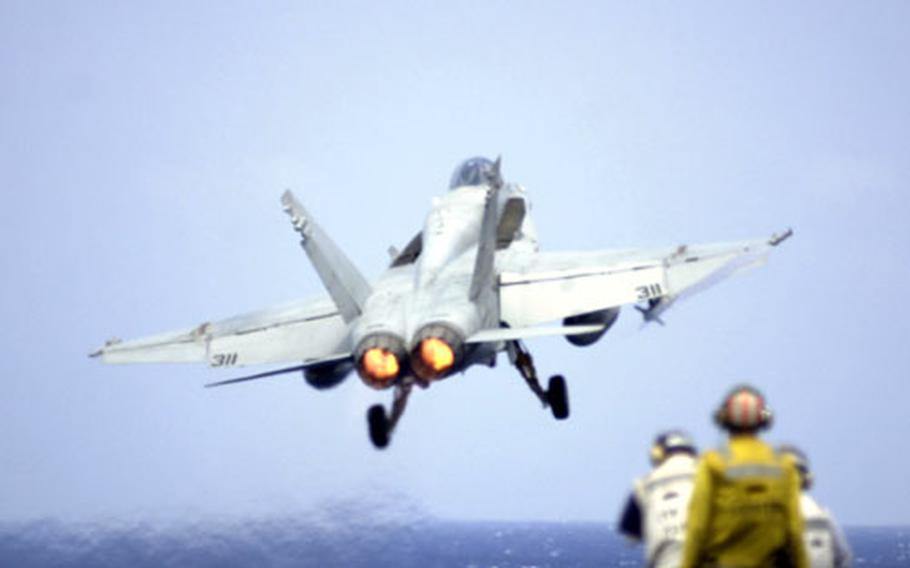 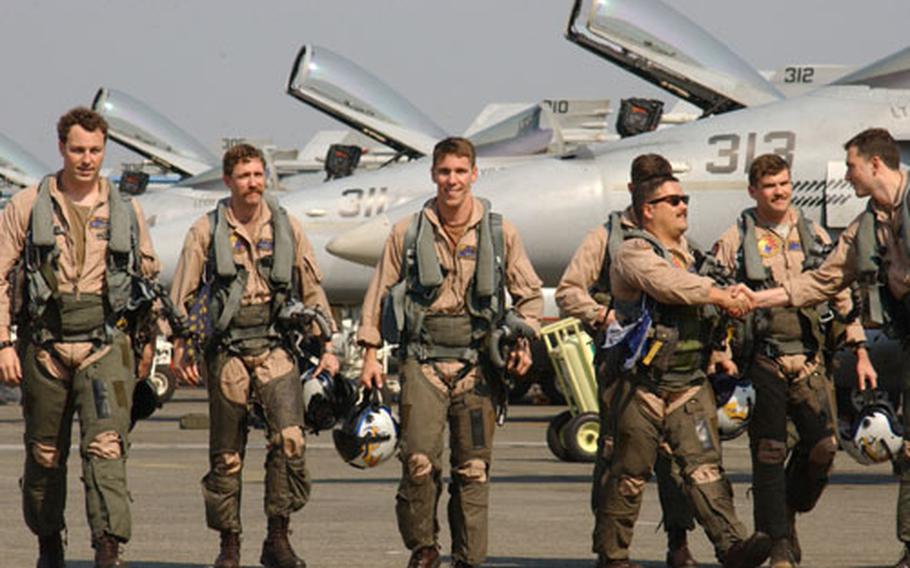 Pilots from Strike Fighter Squadron One Nine Two, step off their planes and onto some steady ground. After a long deployment on board the aircraft carrier USS Kitty Hawk, family and friends are happy to have their heroes back. (Courtesy of U.S. Navy) 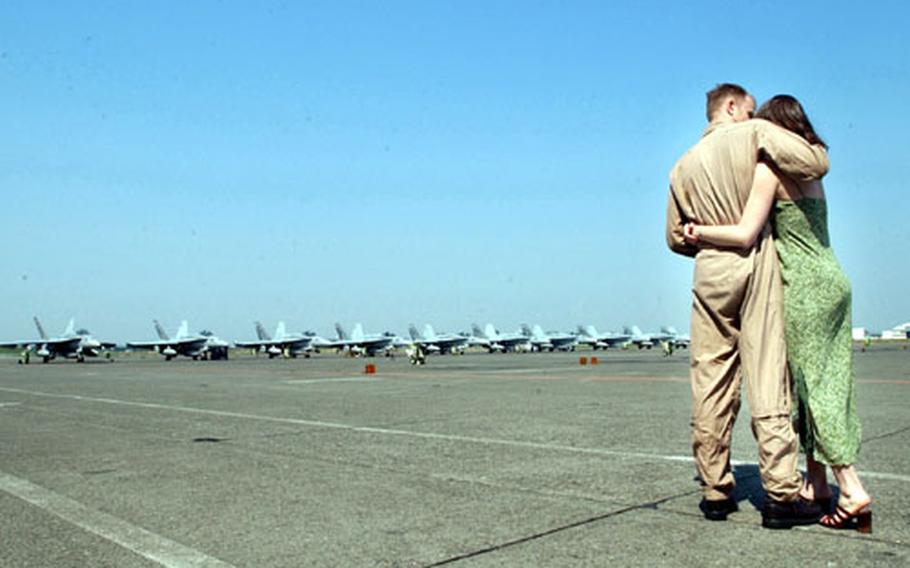 The jets have landed. The pilots are safe. The war is over. Now, Navy Lt. Jake Parsons and his wife, Glory, enjoy each other&#39;s company after his return home from the Middle East. Jake Parsons is an F/A 18 pilot with VFA-27 and was deployed with Carrier Air Wing FIVE aboard the aircraft carrier USS Kitty Hawk for the past four months. The Parsonses are expecting their first child in September. (Courtesy of U.S. Navy) 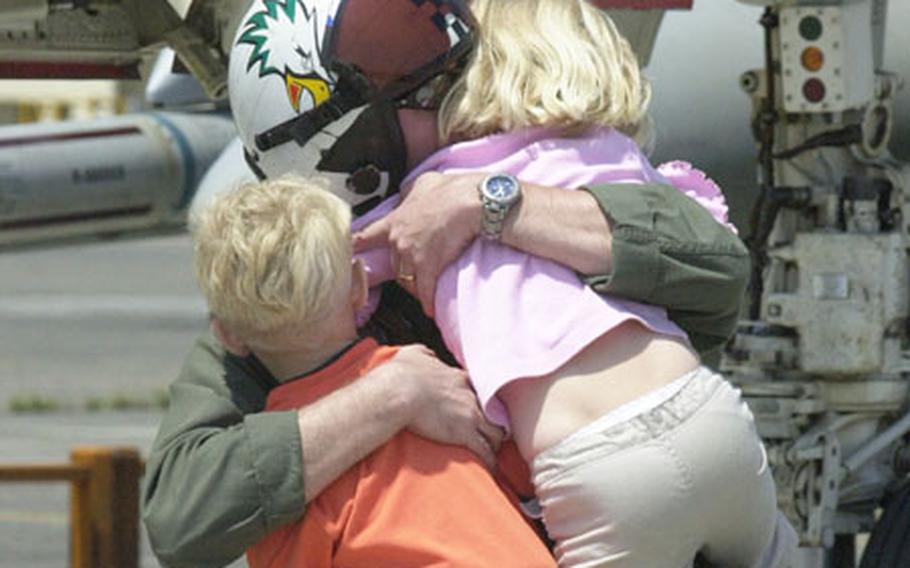 A pilot from Fighter Squadron 195 hugs his children upon his arrival home to Atsugi Naval Air Facility. (Jim Schulz / S&S) 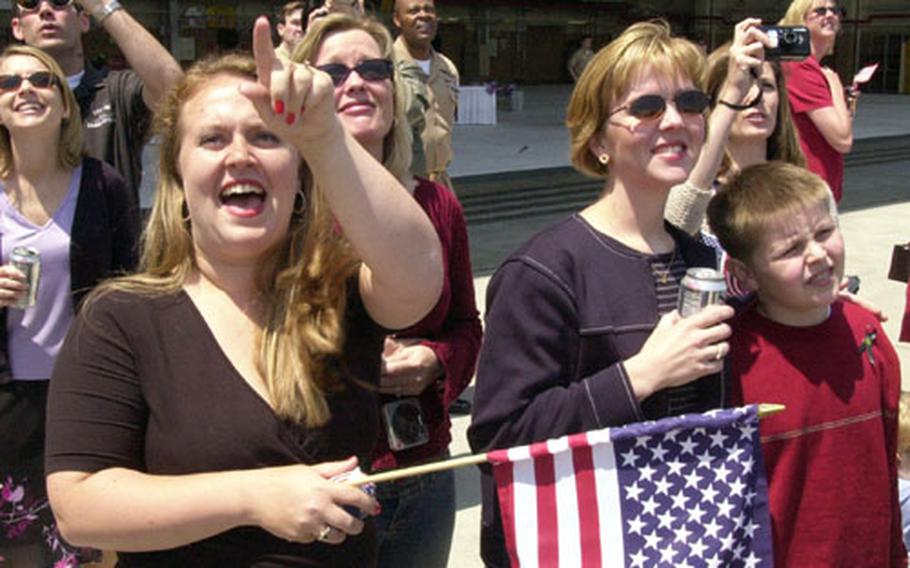 Wives and family of the pilots from Fighter Squadron 195 rejoice when they see F/A-18 jets fly over Atsugi Naval Air Facilty. The squadron was deployed for several months in support of Operation Iraqi Freedom. (Jim Schulz / S&S)

Air wing pilots and aviators with about 70 jets flew home to big hugs, tears of joy and hoots of cheer Thursday during the Carrier Air Wing 5 homecoming at Atsugi Naval Air Facility.

The air wing is from the USS Kitty Hawk, returning from Operation Iraqi Freedom.

This is the second return from war for the Rochas at Atsugi, wife Nancy said. They were stationed here after the Persian Gulf War.

The air wing squadrons returned in groups throughout the day. For each return, eager families waved flags, plugged their ears against the jet engine screams and pointed and waved as aircraft taxied in carrying loved ones gone since January.

He held 1-year-old Kristina in his arms.

Lt. Cmdr. Sean Cushing said he plans to play catch with 3-year-old Zach as soon as he gets home.

The Hornet, Tomcat, Viking and Prowler pilots flew in under a cloudless sky. The rest of the airwing returns Tuesday with the Kitty Hawk crew.

Thursday&#8217;s excitement carried with it a somber reminder.

The pilots and radio intercept operators spoke tersely about their time at war.