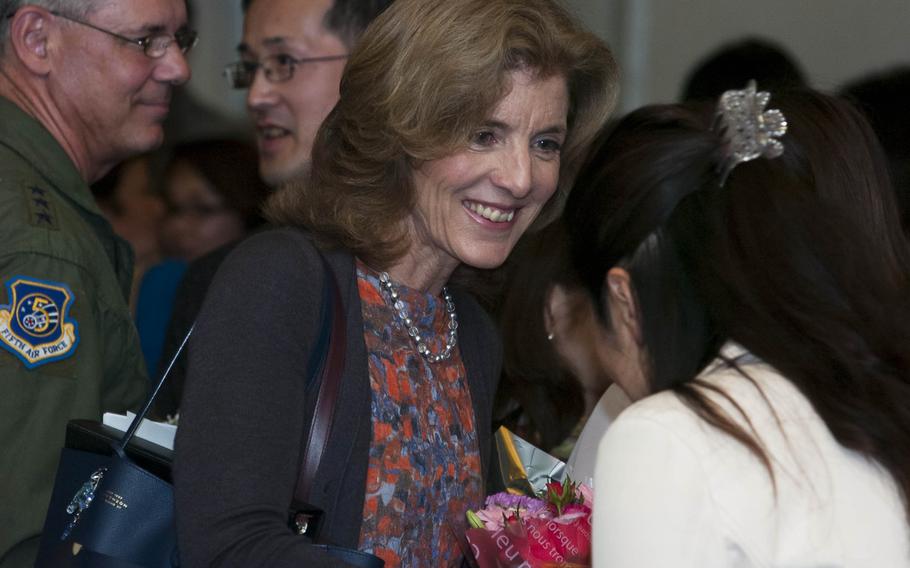 Buy Photo
U.S. Ambassador to Japan Caroline Kennedy interacts with members of the Yokota Air Base, Japan community at the Yokota AB Enlisted Club on April 4, 2014. (Eric Guzman/Stars and Stripes)

U.S. Ambassador to Japan Caroline Kennedy donned a white protective suit, helmet and mask to guard against radiation during a tour of the ruins of the Fukushima Dai-ichi nuclear power station Wednesday.

Damage to the plant, following a massive earthquake and tsunami on March 11, 2011, caused the release of a radioactive plume that contaminated air and water as far south as Tokyo and led to the evacuation of thousands of U.S. military family members from Japan.

Kennedy met with Tepco president Naomi Hirose before visiting the plant — accompanied by a group of officials and her son, John “Jack” Schlossberg, a history major at Yale.

According to a pool report, the group’s first stop at the power station was the No. 4 reactor, where workers are still removing spent nuclear fuel rods from a storage pond.

Kennedy stood on a balcony overlooking the area while a Tepco official explained how the fuel rods were being moved to a safer storage pool. About a dozen plant workers who had been moving fuel rods with a 100-ton crane paused during the briefing.

Out of the more than 1,500 fuel rod assemblies, nearly 900 have already been transferred, according to Tepco spokesman Kenichiro Matsui.

Kennedy also visited a control room for the plant’s No. 1 and No. 2 reactors. On the day of the earthquake, 11 plant staff worked in the room, in pitch darkness, trying to bring the reactors under control, officials said.

Today as many as 5,000 people work at the plant each day, removing the fuel rods and building tanks to store contaminated water, according to Matsui.

By the end of March 2016, Tepco wants to set up enough tanks to store 800,000 tons. It not only builds tanks on site but also brings in completed tanks built by Mitsubishi Heavy Industries. Tepco is building around 15 new tanks a month, and plans to ramp up the pace to 20 tanks a month, officials said.

A pool reporter who toured the plant with Kennedy reported many of the new tanks were already in place on a site littered with heavy equipment and building material.

In comments after the tour Kennedy, dressed in a blue Tepco work outfit, said the U.S. has done all it can to support Japan following the earthquake.

“We stand ready to help in any way we can going forward in the future,” she said, adding that she was grateful for the chance to see the recovery effort at Fukushima.

“It’s very hard to visualize and understand the complexity of the challenge when you just read about it,” she said.

Kennedy’s son said he was inspired by the workers efforts at the plant.

“I hope my peers, my generation, in the United States will keep Fukushima in mind and understand that there is still work to be done and that we can all do something to help,” he said.