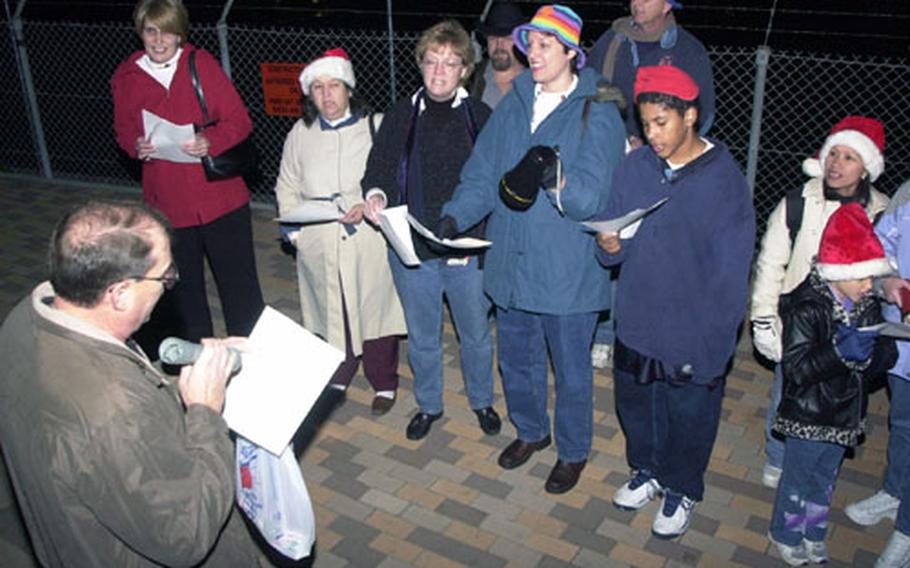 A group of Christmas carolers, led by Cmdr. Harvey Ranard, in front, Sasebo Naval Base&#39;s command chaplain, sang Monday night behind the Bachelors Enlisted Housing tower where a group of sailors had gathered to socialize, cook on the barbecue grill and listen to their music. The carolers sang at the BEH and several other locations around the Main Base. (Greg Tyler / S&S)

Oops. Right people, wrong continent. The carolers Monday evening were as traditional for this time of year as hot apple cider after a snowball fight on a crisp New England morning. So were the songs they sang. But their venue was easy-as-you-go Sasebo, in the southernmost region of Japan&#8217;s mainland.

The weather did try to be appropriately winter-like as about 20 singers gathered at the Community and Education Center, then trekked across the base. But in Sasebo, that meant sweater-weather brisk temperatures and clear and starry skies.

At each location they paused just long enough to sing three carols. Then, before moving to the next stop, they bid farewell with smiles and waves and a peppy rendition of &#8220;We Wish You a Merry Christmas!&#8221;

The first stop was the Bachelors Enlisted Housing tower, where about 30 sailors had gathered at the pavilions behind the barracks to socialize, cook on a grill and crank up some hip-hop.

&#8220;I really don&#8217;t remember all that much Christmas caroling going on back home through the years,&#8221; said Seaman Wyman Hinton, 21, from Opelika, Ala., a USS Safeguard crewmember. &#8220;But still, I think this is a really good thing, and it kind of helps people get in that mood, you know, and get the Christmas spirit and everything going.&#8221;

The carolers, singing louder, bolder, seemingly happier for each of their audiences, also sang at the base fire department, the Bayside Food Court, the Navy Exchange and for the casual diners at the Harbor View Club &#8212; where they crashed the base Security Department&#8217;s annual Christmas party.

&#8220;The songs were very, very nice for getting that Christmas feeling,&#8221; said 19-year-old Jamel Leasure, a Navy dependent, who was at the food court as the carolers visited. &#8220;It helps put people in that jolly mood.