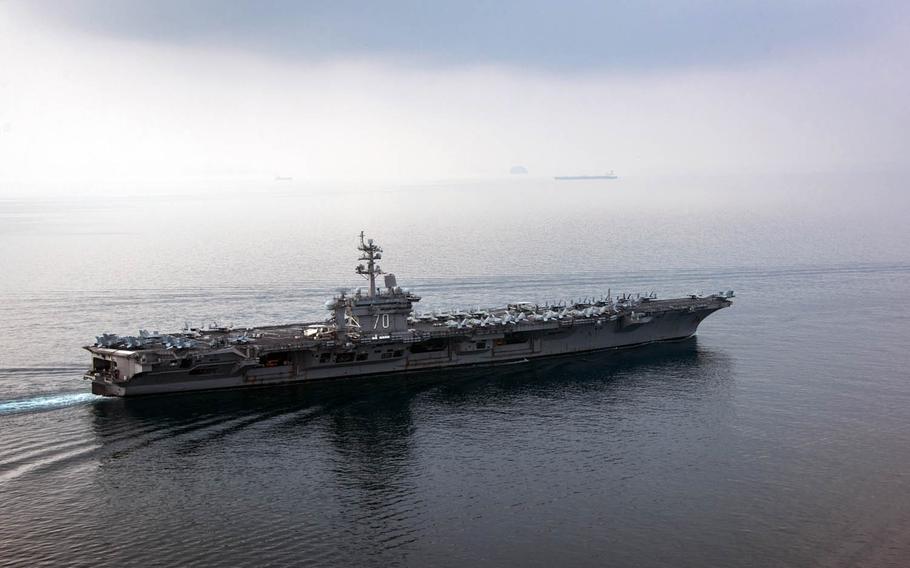 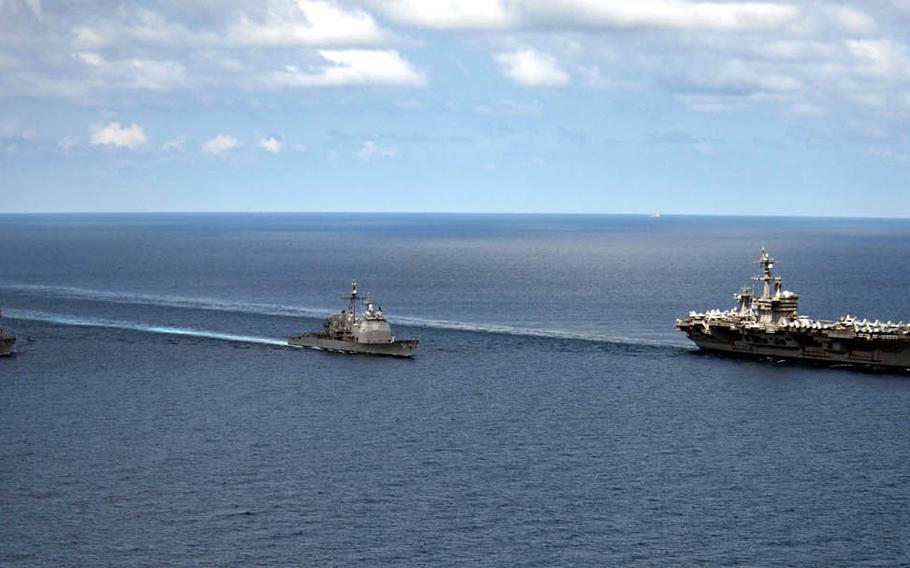 YOKOSUKA NAVAL BASE, Japan — If the USS Carl Vinson strike group is heading to the Korean peninsula, it is taking its time.

More than a week after reports first emerged that the aircraft carrier and its accompanying ships were headed toward the peninsula amid fears North Korea may conduct another nuclear test, Navy photos from Saturday show Vinson operating nearly 3,500 miles away, off Indonesia.

Defense News first reported the existence of the photos, which are freely available on the official Navy.mil website.

If traveling at maximum speed, which the Navy lists at “34.5+ mph,” it would take the carrier, two destroyers and a cruiser roughly four to five days to reach the peninsula from Indonesia’s Sunda Strait.

U.S. Pacific Command officials in Hawaii on Monday referred questions about the strike group to Pacific Fleet, which said it does not discuss details of ship movements.

“The Carl Vinson Strike Group cancelled a previously planned port visit to Australia and is continuing on track for all assigned missions in the Western Pacific,” a statement said.

Thus far, reports on Vinson’s impending arrival in waters near South Korea have come from White House and other Washington officials. The Navy and Pacific Command haven’t dissuaded any of those reports, but never explicitly confirmed Korea as its destination or discussed a timeline.

PACOM directed the Vinson strike group “to sail north and report on station in the Western Pacific Ocean after departing Singapore on April 8 … rather than executing previously planned port visits to Australia,” according to its initial statement on the move.

“Third Fleet ships operate forward with a purpose: to safeguard U.S. interests in the Western Pacific.,” Benham said. The number one threat in the region continues to be North Korea, due to its reckless, irresponsible, and destabilizing program of missile tests and pursuit of a nuclear weapons capability.”

In an interview with President Donald Trump on Fox Business News last week, host Maria Bartiromo asked, “You redirected Navy ships to go toward the Korean Peninsula. What are we doing right now in terms of North Korea?

After declining to discuss military movements initially, Trump then said that, “We are sending an armada. Very powerful.”

“We have submarines. Very powerful; far more powerful than the aircraft carrier, that I can tell you,” he added.

A Reuters reporter covering the Pentagon first reported April 9 that the Vinson strike group was headed toward the Korean peninsula, citing an unnamed U.S. official.

Trump has stated that all options, including military action, are possible as North Korea continues to develop its ballistic missile and nuclear weapons program. The communist state has conducted two nuclear tests and test-fired nearly 30 missiles since last year.

A North Korean missile exploded seconds after launch Sunday, according to U.S. officials. The failure came as Vice President Mike Pence arrived in the South for talks.