Sailors aboard aircraft carrier USS Carl Vinson prepare to man the rails as the ship departs its homeport of San Diego. (U.S. Navy)

Sailors aboard aircraft carrier USS Carl Vinson prepare to man the rails as the ship departs its homeport of San Diego. (U.S. Navy) Sailors aboard the aircraft carrier USS Carl Vinson man the rails as the ship departs its homeport of San Diego. (U.S. Navy) 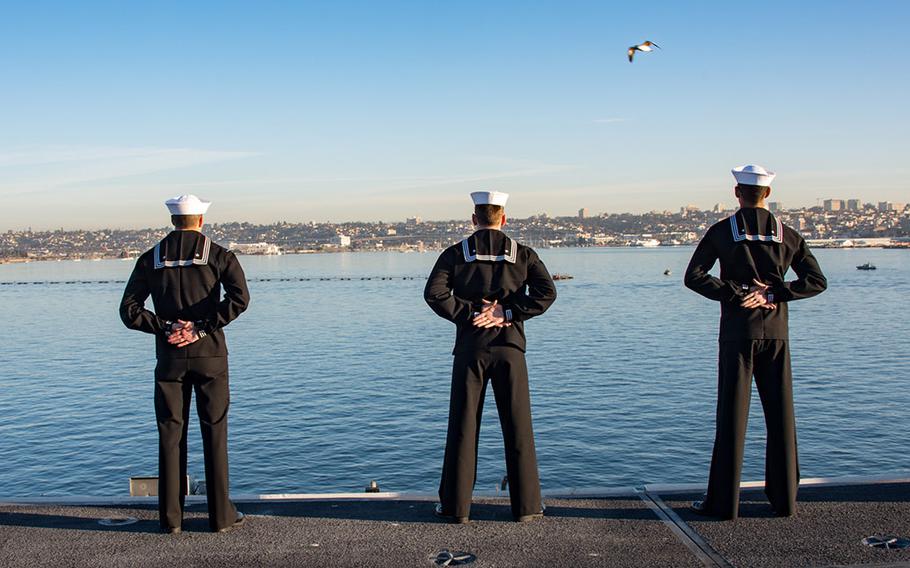 More than 6,000 sailors have left the West Coast for the tension-filled Western Pacific.

The aircraft carrier USS Carl Vinson, along with the guided-missile cruiser USS Lake Champlain and guided-missile destroyers USS Wayne E. Meyer and USS Michael Murphy, are heading to the region on a regularly scheduled deployment, the Navy said Friday.

The Hawaii-based Michael Murphy will link up with the San Diego-based ships later. The Carl Vinson brings with it Carrier Air Wing 2, which includes more than 70 aircraft.

The strike group is deploying to the region under the Third Fleet Forward initiative, the Navy said. That will allow the ships to remain in the 3rd Fleet chain of command while operating in 7th Fleet waters.

“I look forward to the strike group further demonstrating Third Fleet’s evolving operational role across the Indo-Pacific region,” Rear Adm. John Fuller, the strike group’s commander, said in a Navy statement. “We are trained and ready to execute our mission.”

Chief of U.S. Naval Operations Adm. John Richardson told Stars and Stripes last month that more ships from 3rd Fleet could be deployed to the region.

“We will continue to assure that we meet all of our missions here in the Asia-Pacific area,” he said. “It could be something coming forward from 3rd Fleet or something like that to meet those requirements.”

The strike group’s deployment comes at a time when the 7th Fleet is facing a ship shortage after two deadly collisions and a delayed deployment. Collisions over the summer involving the USS Fitzgerald and USS John S. McCain have put the destroyers out of commission for the immediate future.

The destroyer USS Milius, which was scheduled to join 7th Fleet last summer, had its deployment pushed forward to an unknown date in 2018 while the ship undergoes a modernization process that will outfit it with the Aegis Baseline 9 combat system.

The Lake Champlain was involved in a collision with a South Korean fishing boat last spring that a Navy investigation released in November declared was “avoidable.” The report said failures in watch-standing and navigation were the main causes of the collision, which resulted in administrative and disciplinary actions against the Lake Champlain’s captain, executive officer and several other crew members.

The Carl Vinson strike group conducted a dual-carrier training exercise with the USS Ronald Reagan group last summer in waters near the Korean Peninsula. The Carl Vinson’s deployment irked North Korea, which threatened to target the ship with “merciless ultra-precision strikes” and later released a propaganda video showing missiles striking the carrier and sinking it.

The ships wrapped up a three-week training exercise in late November that included “a series of at-sea drills, missile shoots, and strike operations using a variety of naval platforms and weapons,” the Navy statement said.