Carjacking is on the rise in Naples, Italy 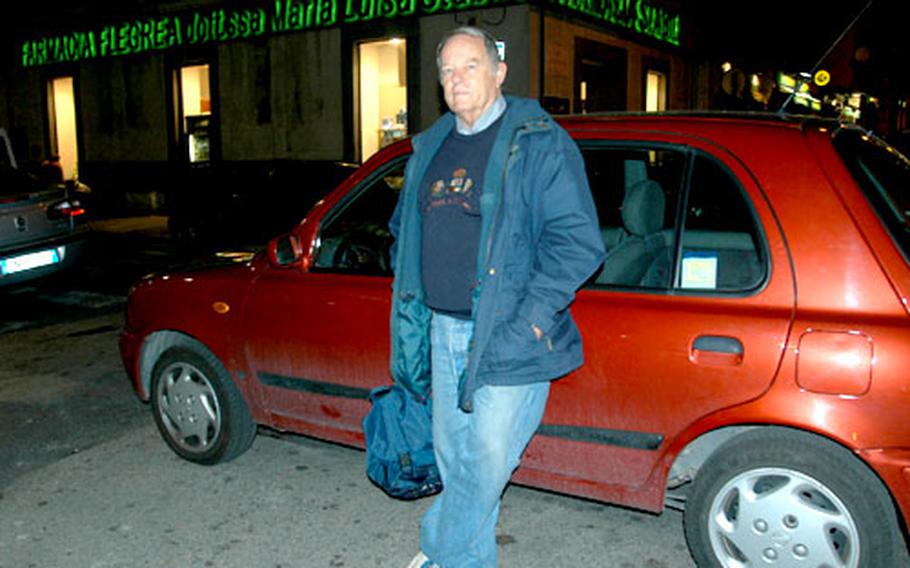 Wylie Miller leans against his new car, a maroon Nissan Micra, near the spot where his previous car was stolen in a carjacking. (Sandra Jontz / S&S)

One of those crimes occurred in 2002 when Miller was the victim of a carjacking. He sustained injuries when the crook sped away in his 1999 metallic silver Nissan Micra after colliding with Miller&#8217;s left arm in a crash that sent the California transplant tumbling to the ground.

So far this year, Italian authorities have logged 9,000 carjackings, she said. While thieves might not target Americans directly, Americans have been victims.

Of the 9,000, four have involved Americans. Three were completed carjackings in which cars were taken, and one was an attempt in which the driver realized what was happening and jumped back into her car and sped off, Wolfe said.

While the American number is small compared to the overall reports, those are the &#8220;official&#8221; cases in which victims took time to make written complaints, Wolfe said.

The Naval Criminal Investigative Service keeps logs only of written complaints. There are about a dozen cases in which security received emergency phone calls of carjackings, but which people failed to follow through by lodging written complaints, she said.

Of the four logged cases, none of the victims sustained serious injuries, Wolfe said.

NCIS works with six Italian investigators in Naples hired by the military security department to be liaisons with the local national police for incidents involving U.S. or Joint Forces Command personnel and families.

Staying alert and aware of your surroundings is one of the best preventative pieces of advice, Wolfe said. Motorists should always keep doors locked &#8212; including while driving &#8212; keep windows rolled up and keep belongings out of view.

If there is an accident with another vehicle, drivers should pull to safe, well-lit areas before getting out to inspect damage, she said. And they should do so only after indicating to the other driver that you recognize there might have been a collision so that it does not appear as if you are running from the scene, she advised.

Tactics thieves use to lure drivers from their cars include throwing objects such as rocks or bottles, using multiple vehicles to box in a motorist, causing a fender-bender or using a rubber mallet to feign a crash, which gets a driver to stop but minimizes actual damage to the car, increasing its value for &#8220;resale,&#8221; Wolfe said.

The mallet trick is what fooled Miller.

He then made a second crucial error after pulling off to the side of the road to inspect damage: He left the keys in the car.

Miller, who has lived in Naples for more than 20 years and volunteers with an association for U.S. retirees living in southern Italy, pulled to the side of road, and got out of his car when the young Italian male told him Miller&#8217;s vehicle sustained damage and his left tail light was lying on the pavement.

A second male, whom Miller did not see at first, jumped into Miller&#8217;s car and took off. The first man, still in his own vehicle, sped off, leaving the injured Miller lying on Via Beccadelli, the road leading to the Agnano base.