Caring for tombs warms tense relationship between US military and Okinawans 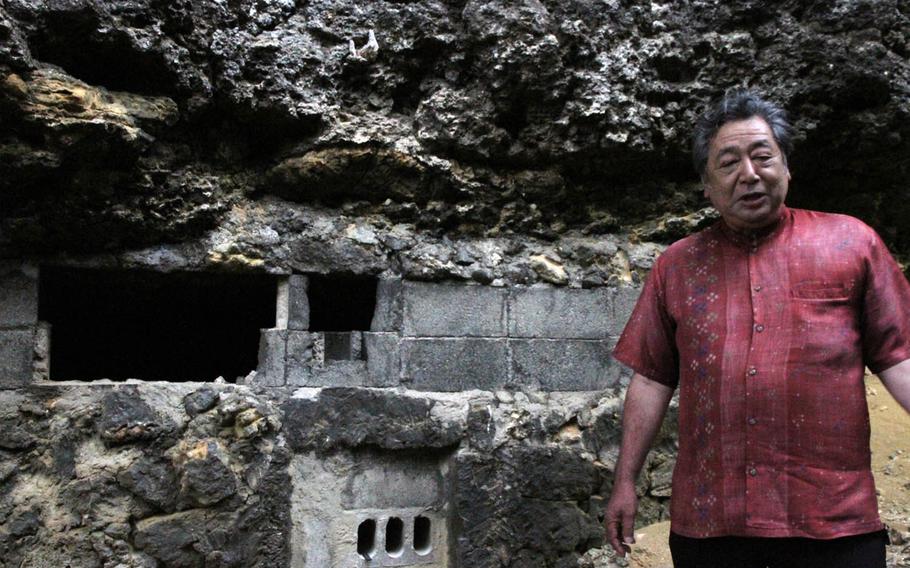 Buy Photo
It was a steep climb for Mitsuo Nishishinya, Heshikiya's district mayor, to get to ancestral tombs atop a steep jungle hill at White Beach Naval Facility, Okinawa. However, thanks to servicemembers stationed on Okinawa's only joint U.S.-Japanese base and their families, not only have the tombs been spared from development, but the jungle has also been cleared and steps built, making visiting the tombs of his forefathers easier and more accessible. (Matthew M. Burke/Stars and Stripes)

Buy Photo
It was a steep climb for Mitsuo Nishishinya, Heshikiya's district mayor, to get to ancestral tombs atop a steep jungle hill at White Beach Naval Facility, Okinawa. However, thanks to servicemembers stationed on Okinawa's only joint U.S.-Japanese base and their families, not only have the tombs been spared from development, but the jungle has also been cleared and steps built, making visiting the tombs of his forefathers easier and more accessible. (Matthew M. Burke/Stars and Stripes) 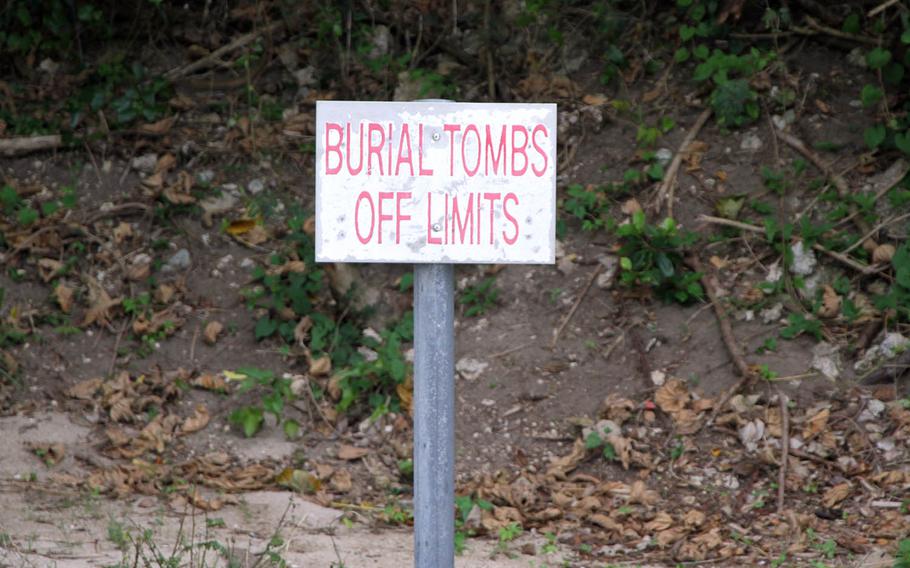 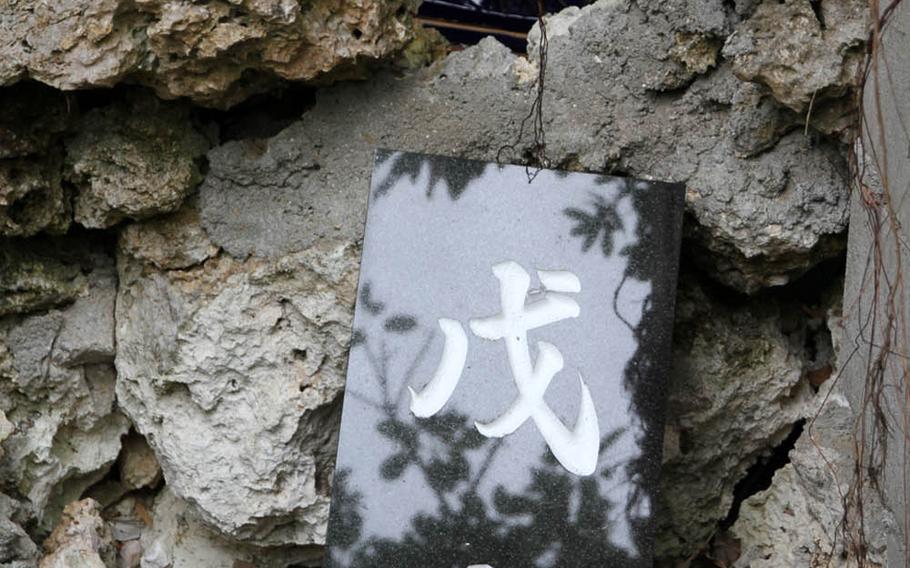 Buy Photo
After a long walk through the jungle, up and down steep hills at the U.S. Navy's White Beach Naval Facility, sits one of the Heshikiya community's most sacred sites. (Matthew M. Burke/Stars and Stripes) 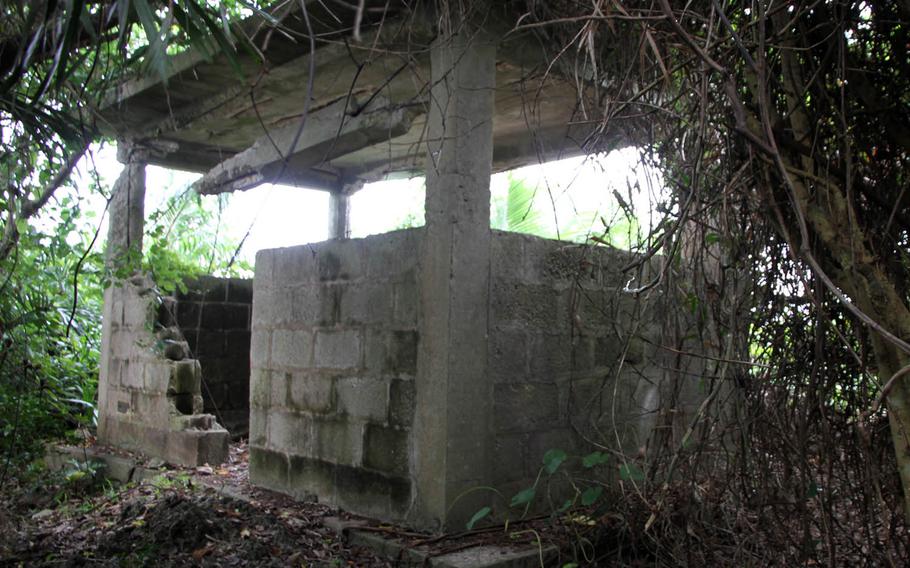 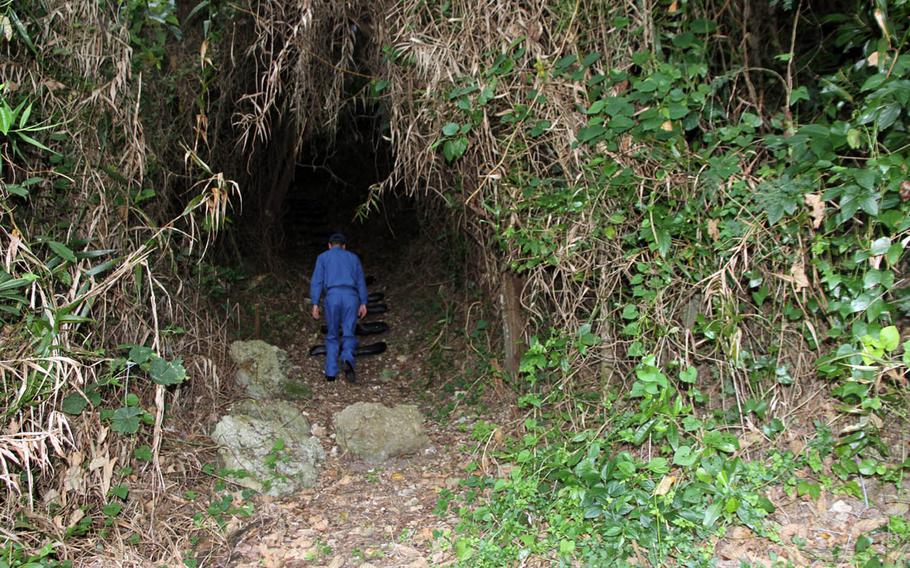 Buy Photo
A Japan Maritime Self-Defense Force sailor begins the long journey up to one of the Heshikiya community's most sacred sites at a U.S. military installation on Okinawa. (Matthew M. Burke/Stars and Stripes)

CAMP FOSTER, Okinawa — Not many people outside Okinawa know about the Navy’s White Beach Naval Facility in Uruma’s Heshikiya community, and the island’s joint U.S.-Japanese military base holds some secrets of its own.

Deep within the jungle on the small, sparsely populated installation are 155 tombs of the area’s indigenous people and other sites considered sacred to locals.

Over the past couple of years, U.S. and Japanese servicemembers and their families have worked to clear thick jungle brush from the trails, and base access has been arranged for locals who want to pay their respects. These efforts have helped warm relations between locals and the military on an island known for anti-U.S. military sentiments and protests.

“We call this area ‘guso yama,’ ” which means “mount of the next world,” said Seiichi Oshiro, 80, as he visited an Imperial Japanese lookout tower near the tombs for the first time in 65 years in late April.

Oshiro, a member of a group dedicated to restoring the community’s cultural assets, played on the lookout tower as a child just after the end of World War II. When American troops took the base during the war, they manned the lookout and added concrete walls to the structure, he said.

“I feel overwhelmed today,” he said. “Before the trails were cleared, all we could do was offer prayers toward the tombs and sacred sites from the beach. That was the closest we could get.”

Oshiro traced the aged columns with his fingers.

“When I was in a middle school, some Americans on base helped me to go up the lookout,” he said. “This brings back so many memories of those days. All thanks to the great and hard work by the American people.”

Accessing the Ryukyuan tombs and other sites is not easy. Spread across the base, some sit just off the main roads, while others are atop steep, rocky jungle hills.

Strange happenings The idea of maintaining the sites was born seven years ago, said Hiroe Shiroma, a community relations specialist for Commander Fleet Activities Okinawa. Strange occurrences were reported in a newly constructed building on base, which is home to Task Force 76’s leadership and is the staging ground for amphibious Marines.

People working in the new building complained about headaches and seeing strange things. Some said the electricity would shut off on its own.

The base commander at the time instructed Shiroma to contact Mitsuo Nishishinya, Heshikiya’s district mayor, for advice.

“When I heard about it, I recalled one of the elderly people in our community telling me that a fence encircled the new building and prevented his family from visiting their ancestral tomb,” Nishishinya said. “I was not sure if it had something to do with the strange phenomenon, but I told her about it.”

Base officials then built a paved path to the tomb, he said, and the strange occurrences ceased.

Since then, base officials have expanded their work, base spokesman Marshall Smith said. About a year ago, residents approached Nishishinya about overgrown brush that prevented them from accessing the tombs. He approached the base commander.

In April 2016, 20 Navy sailors, 15 Japan Maritime Self-Defense sailors and five locals cleared paths to the sites using chainsaws and machetes. About 40 volunteers were involved in October, 15 others in January, 26 in February and 16 last month.

“We had multiple chainsaws going to clear the larger branches and machetes and other tools just to get in there,” he said. In the end, “it was really rewarding. We’re committed to maintaining our relationship with the local community. This is one way we can show respect for the local culture.”

The base has processed 1,285 requests from locals for tomb visits this year, Smith said.

Sacred sites Agari no Utaki is a site of worship to the god who protects the community from evils that come from beyond the ocean. It features tablets, shisa dogs and a shelter to burn incense. It is not known when the site was built into the rock, but official Japanese government documents from 1908 mention it.

Heshikiya has four other sacred shrines on White Beach, including Iri no Utaki, which is dedicated to worshipping the goddess of fertility, prosperity and safe journeys on the ocean. The tomb for Aji, ruler of the community, is there too, along with countless family tombs.

The sites are off-limits to servicemembers and base workers for the most part, out of respect for the human remains that can be found there.

“The entire hill is a sacred site,” Nishishinya said. “Offering prayers at a sacred site brings us peace of mind. You may think that there is nothing but mere rocks lying here, but it’s not what is on display and you can see. It’s this place and spot that we regard sacred.”

Nishishinya credited the U.S. military for the tombs’ preservation. Had they been off base, it would have been hard to keep them sheltered from Okinawa’s post-war drive toward modernization and development, he said.

He thanked Americans for their work to provide access to the sites, which has led to positive relations between the military administrators and the local community.

“I was surprised to see all the bushes were cut down, and even steps were made,” Nishishinya said while surveying the work. “I never expected such a thorough job.”