Caring for pets in Iwakuni and Sasebo keeps veterinarian on go 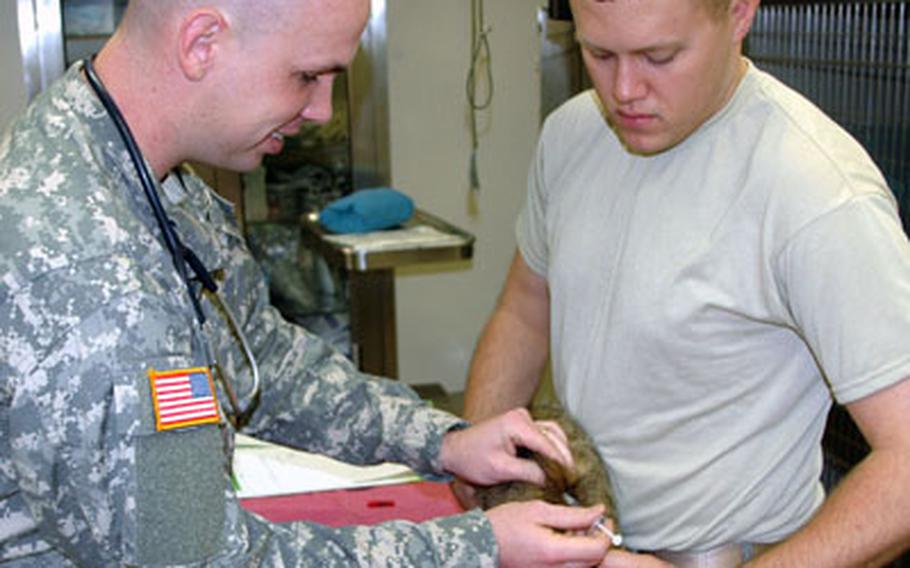 Army Capt. Kevin Hinton, left, gives a shot to a pet cat with help from Spc. Nick Kersting at the Sasebo Veterinary Treatment Facility. Hinton is the veterinarian for Marine Corps Air Station Iwakuni and Sasebo Naval Base, making the 700-mile round trip by train twice a month to care for military working dogs and about 850 pets among personnel at both bases. (Greg Tyler / S&S)

SASEBO NAVAL BASE, Japan &#8212; With about 450 patients here and another 400 or so more living more than 300 miles away, Army doctor Capt. Kevin Hinton has one hairy caseload.

Still, Hinton &#8212; veterinarian for Sasebo and Marine Corps Air Station Iwakuni since July &#8212; appears to be taking his abundant clientele and twice-monthly train trips in stride.

Although Army veterinarians often travel between nearby bases in the U.S., he said, he&#8217;s the only one making such rounds in the Pacific.

Army vets care for pets and military working dogs on bases of all service branches in the Pacific and in the United States, Hinton said.

They also inspect all food bound for human consumption at bases.

As for his travel itinerary, Hinton, who lives at Iwakuni with his wife and three children, said, &#8220;Every weekend I feel like I&#8217;m just getting back or just getting ready to go again but there are a lot worse places to go than Sasebo.&#8221;

At Iwakuni, he works with an enlisted Army specialist and one civilian assistant to provide health care for about 400 personal pets. In Sasebo, he cares for even more pets, assisted by an Army specialist who maintains the operation when the doctor is in Iwakuni.

At both bases, he said, when an emergency arises and he&#8217;s not on post, pet owners are referred to local Japanese veterinarians.

Hinton, a University of Florida graduate, said being a veterinarian has been his goal &#8220;as long as I can remember.&#8221;

His compassion for animals was evident earlier this week when he helped Sasebo&#8217;s Base Animal Rescue group treat two abandoned cats they rescued for eventual adoption.