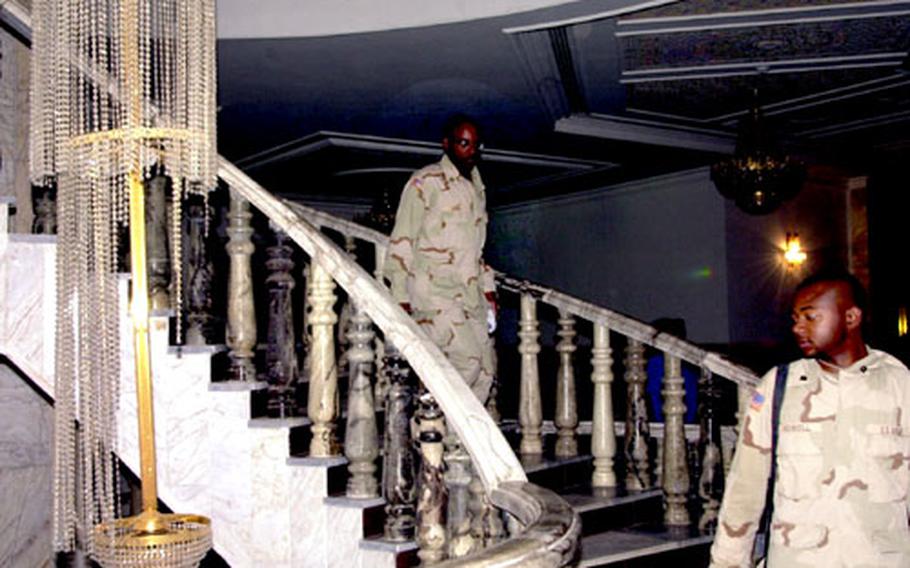 Soldiers inside one of Saddam Hussein&#39;s palaces walk down a staircase and past a chandelier from which people have snatched several strands of imitation crystal. (Scott Schonauer / S&S)

Soldiers inside one of Saddam Hussein&#39;s palaces walk down a staircase and past a chandelier from which people have snatched several strands of imitation crystal. (Scott Schonauer / S&S) 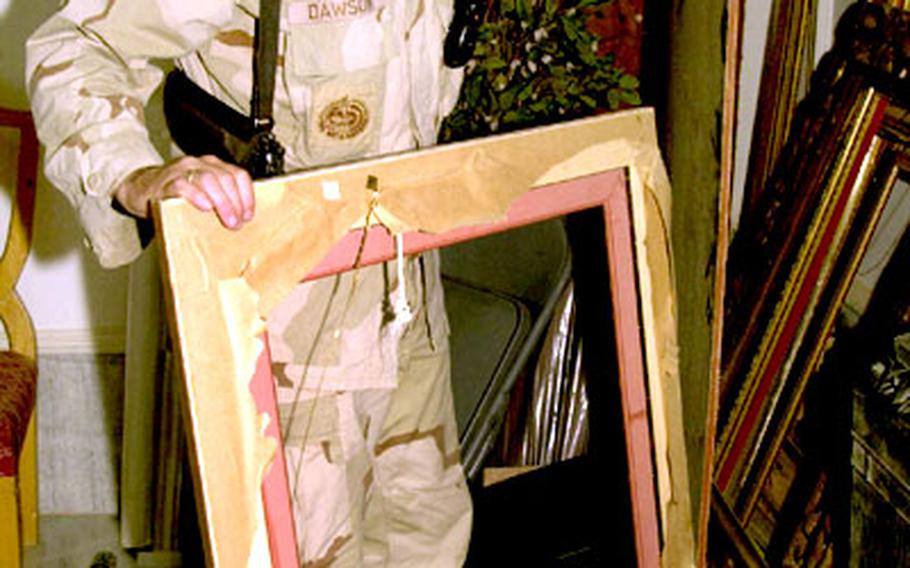 Army Sgt. Maj. Mikel Dawson holds a frame from which a picture or painting was taken at Saddam Hussein’s palace at the Baghdad International Airport. Some soldiers are suspected of taking paintings and gold water faucets from the palace. (Scott Schonauer / S&S)

But don&#8217;t assume the locals are the only ones taking a little something from Saddam Hussein&#8217;s regime.

Dawson showed where soldiers had pried or broken off their war trophies.

Most of the soldiers who have taken some of the items from Hussein&#8217;s lavish retreat have done so without getting caught. The palace &#8212; once a &#8220;club&#8221; for the former Iraqi dictator, his family and close friends &#8212; now houses about 400 soldiers, many of them military police.

Dawson, who lives in Denmark and shoes horses when not fulfilling his reservist duties, is the palace caretaker and has watched some of its items slip away without a trace.

He suspects that visiting soldiers are the ones doing the stealing. Most of the stuff taken is as cheap as Mardi Gras beads after Lent. But to soldiers looking for something they can say came from one of Hussein&#8217;s palaces, anything apparently is worth prying off and taking away, Dawson said.

The most popular item is a strand of imitation crystal that hangs from the many chandeliers. Soldiers also have taken paintings or whatever was once in giant wooden frames. Dawson showed a stack of frames, the pictures recently torn out.

It&#8217;s not the first time soldiers have been accused of looting and vandalism. Workers at the airport have claimed that invading soldiers ransacked the duty-free stores and blew up several passenger planes on the tarmac.

Also, some Iraqis have accused coalition troops of taking money at checkpoints and on raids. Some American soldiers were recently disciplined for stealing from an Iraqi vendor, the coalition reported last month.

The small portion of items soldiers are suspected of taking from the former regime&#8217;s many palaces pales in comparison to the widespread looting by Iraq&#8217;s citizens. But Dawson said there is no excuse for it.

Preventing soldiers from taking what they want has become part of Dawson&#8217;s job description as the man in charge of the palace. He has made a lot of improvements to the place, fixing doors that have been smashed, installing windows that have been broken and replacing light fixtures.

Despite who once owned the luxurious house, he respects its beauty and architecture.

Catching soldiers in the act is almost impossible. However, one soldier was caught trying to pry an Arabic symbol off a marble wall with a Gerber multipurpose tool. A company commander held a soldier&#8217;s camera as he leaned over a spiraling staircase to snag a chandelier string, Dawson said.

Army Capt. Steve King, Task Force 55 postal commander at the airport, said if any of the postal clerks spot an item they think might have been looted they report it to the military police.

Each package sent to the United States, another country or military base, is searched before it is shipped. However, King admitted that is difficult to determine if something such as a Persian rug came from a palace or was purchased from a street vendor in Baghdad.

At a palace in downtown Baghdad, where the Giessen, Germany-based 2nd Battalion, 3rd Field Artillery is staying, soldiers are allowed to take pieces of the palace that has been reduced to rubble.

Soldiers taking anything they are not supposed to grab are subject to time in jail, and possibly a reduction in rank, if they are caught.

Soldiers in Iraq are mailing back more than love letters and postcards to friends and family.

Some troops have tried to ship shell casings, Iraqi pistols and flags. Many have even tried to mail sand from the Middle East.

There is just one problem.

It is against the rules to mail such items, said Capt. Steven King, Task Force 55 postal commander at Baghdad International Airport.

Weapons, ammunition, Army radios and military-issued equipment are prohibited. According to a general order on war trophies, Iraqi flags also cannot be taken from the country or mailed to the States or another American military installation.

That doesn&#8217;t mean soldiers do not try to sneak out a few items.

Postal workers inspect each package before it leaves the country.

Some postal clerks have found Iraqi pistols sewn into clothing to conceal them. Others have found ammunition, leading postal workers to call bomb squad teams to come in and make sure it isn&#8217;t live.

However, there are some things soldiers can take with them or mail back home. Knives are allowed as long as they are protected in a sheath. Also, postal workers won&#8217;t confiscate, for example, an Iraqi beret.