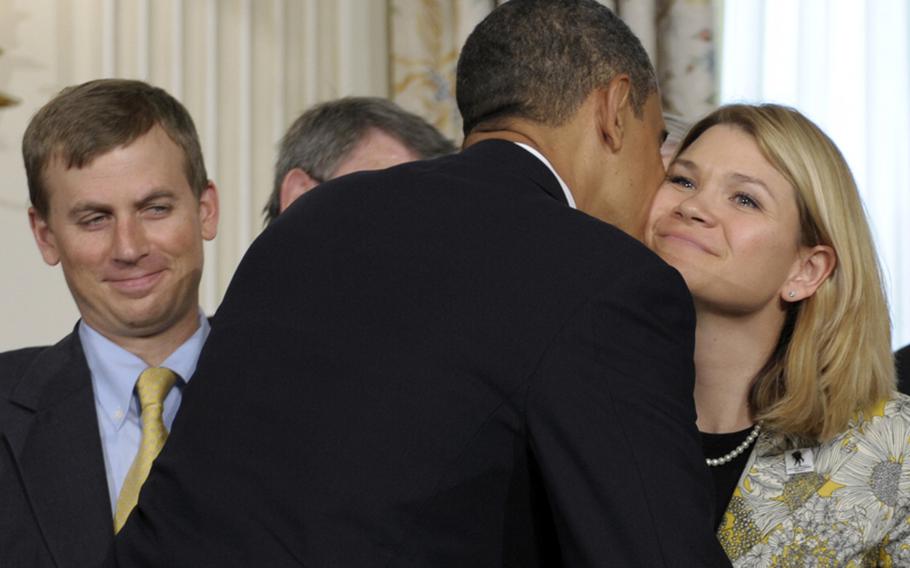 WASHINGTON &mdash; A plan to provide benefits to caregivers of wounded troops may now exclude some of the same families who appeared alongside President Barack Obama when the measure was signed into law last spring.

Lawmakers and veterans advocates are blasting a proposal outlined by Veterans Affairs officials this week as months behind schedule and unnecessarily restrictive for military families.

Ted Wade, who lost his right arm and suffered traumatic brain injury in a roadside bombing in Iraq seven years ago, and his wife, Sarah, who left her job to take care of him full time, were among the leading voices on Capitol Hill advocating for the caregivers benefits. Obama thanked them personally at the bill signing ceremony last May.

But under the new guidelines released Wednesday, his condition may not be severe enough to qualify them for monthly living stipends and other caregiver training. In an interview Thursday, Sarah Wade called that devastating.

"I stood next to the president when he signed this bill," she said. "He gave me a kiss afterwards. For us not to qualify for the benefits now, it's a really scary irony.

"The VA can't offer me any more support now than they could in November 2004, when my husband left the hospital. For once, I had it in my head that this year would be different. Now it might be another year before we see anything. And my initial thought was, 'I don't know if I can make it another year.'"

Under the bill passed by Congress, the VA was directed to outline those benefits plans by last November, and start paying caregivers last month. Instead, department officials said it could be months before the benefits plan is finalized, and even longer before any families receive checks.

&ldquo;This is horrendous for the families who&rsquo;ve had to give up their jobs and the warriors who may end up back in nursing homes because their families can&rsquo;t afford to take care of them,&rdquo; he said. &ldquo;Financially, they&rsquo;re strained to the breaking point.&rdquo;

He also called the narrow reading of the law by VA officials unfair and short-sighted. Under the proposal, only veterans with the most severe injuries requiring &ldquo;continuing medical management or at high risk for personal safety&rdquo; will qualify for the family caregiver support.

Debbie Schulz, whose son Steven suffered severe traumatic brain injury in bomb blast in Iraq six years ago, said she&rsquo;s unsure their family will qualify under the rules, even though Steven requires around-the-clock care. He can perform some tasks around the house alone, but still struggles with everyday tasks such as feeding himself.

&ldquo;I don&rsquo;t know if we&rsquo;ll qualify,&rdquo; she said. &ldquo;So much of this is going to depend on what some clinician says, and I shouldn&rsquo;t have to worry what a clinician in Houston says when he doesn&rsquo;t see him every day.&rdquo;

Schulz said that more than the living stipend, her family needs the medical insurance coverage and family counseling options offered under the caregivers bill.

VA spokeswoman Katie Roberts said the rules as written are not final, and the department will spend coming weeks working with the public to see if changes need to be made.

Already a group of 17 senators has criticized the delay in the process, sending a letter to the White House demanding quicker action on the caregiver benefits.

On Wednesday, following the release of the new details on the benefits, Senate Veterans Affairs Committee Chairwoman Patty Murray, D-Wash., called the VA&rsquo;s plan too slow and &ldquo;not good enough.&rdquo;

&ldquo;This law was passed to help support the thousands of family members of veterans who have left behind careers, lives, and responsibilities to see that their loved one can recover from wounds they suffered defending our country,&rdquo; she said in a statement. &ldquo;I&rsquo;m not going to let the VA minimize the impact of the bill that we passed.&rdquo;

VA officials did not give a timeline on when benefits ultimately might be available to families of wounded troops. Nardizzi said he fears it could be more than a year before the department finalizes rules and sends out its first round of checks.

&ldquo;We&rsquo;ve already had dozens of families call us upset over these new plans,&rdquo; he said. &ldquo;The frustration is building. They feel like this whole process was nothing but a sham.&rdquo;

Both Ted and Sarah Wade worked closely with lawmakers in drafting the caregivers' legislation. Sarah Wade said the final bill signed into law had none of the restrictions or concerns that the VA plans included this week.

"They just don't seem to get it," she said. "It's frustrating. They keep failing to recognize my husband as a human being, with thoughts and feelings, instead of a patient. I'd like to see [VA] Secretary [Eric] Shinseki spend a day with my husband, so he could understand what he really needs day-to-day."