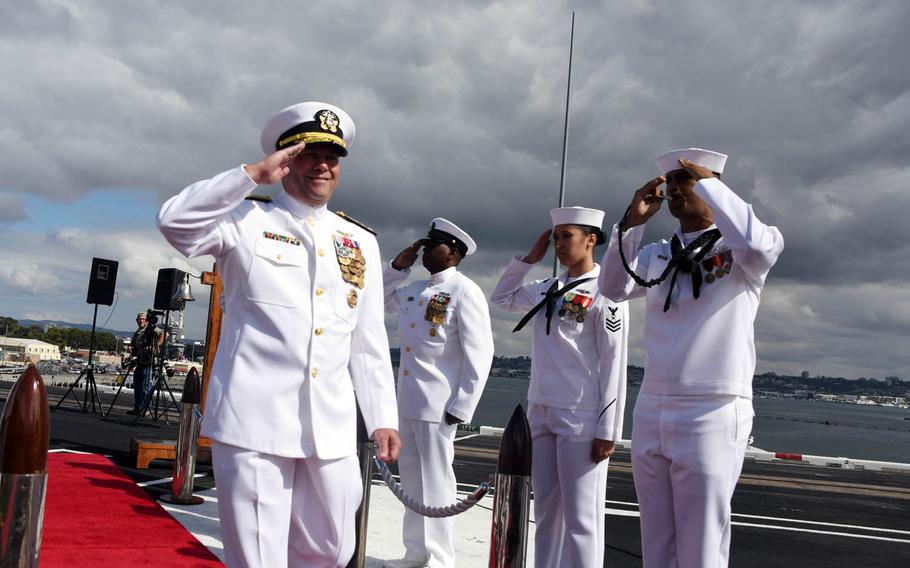 Vice Adm. John Alexander salutes side boys on the flight deck of the aircraft carrier USS Theodore Roosevelt as he prepares to assume command of the 3rd Fleet from Vice Adm. Nora Tyson on Friday, Sept. 15, 2017. (Kory Alsberry/U.S. Navy)

Alexander took over from Vice Adm. Nora Tyson during a ceremony Friday aboard the aircraft carrier USS Theodore Roosevelt in San Diego. Tyson, the first woman to command an operational numbered fleet and the first female commander of a carrier strike group, is retiring after 38 years, a Navy statement said.

Third Fleet, which includes five carrier strike groups, more than 30 submarines and more than 400 aircraft based in California, Washington and Hawaii, has expanded its presence in the Western Pacific in recent years under an initiative known as 3rd Fleet Forward.

The initiative allows it to retain command of some ships operating in the Yokosuka, Japan-based 7th Fleet’s operations area.

Pacific Fleet commander Adm. Scott Swift said, in the Navy’s statement, that Alexander would continue the changes at 3rd Fleet.

“Cultural change is commander’s work, and it takes time,” he said.

Alexander said he looked forward to bringing the fleet back to its Pacific roots. It was formed in 1943 and played a key role in battling Japanese naval forces in the Pacific during World Was II, the Navy said. Japanese surrender documents ending the war were signed aboard the USS Missouri, then the flagship of the fleet.

“[Pacific Fleet commander Adm. Scott Swift’s] vision of 3rd Fleet Forward as a second maneuver element in the Pacific is more relevant today than ever … we must remember our roots,” Alexander said in the statement. “It is our time to carry this operational vision forward.”

Third Fleet’s Pacific expansion comes at a time when 7th Fleet, the Navy’s forward-deployed force in the Pacific, has suffered a string of accidents and delays that have left it with four fewer warships.