Care packages are always appreciated, but sometimes they can be hit or miss 2nd Lt. Japheth Johnson, 25, of New Orleans, shows off a care package from his girlfriend. She sent him a box of Doritos, candy and other snacks, which he offered to his friends as soon as he opened the box. “She sends way too much,” he said, though definitely not complaining. (Teri Weaver / S&S)

2nd Lt. Japheth Johnson, 25, of New Orleans, shows off a care package from his girlfriend. She sent him a box of Doritos, candy and other snacks, which he offered to his friends as soon as he opened the box. “She sends way too much,” he said, though definitely not complaining. (Teri Weaver / S&S) 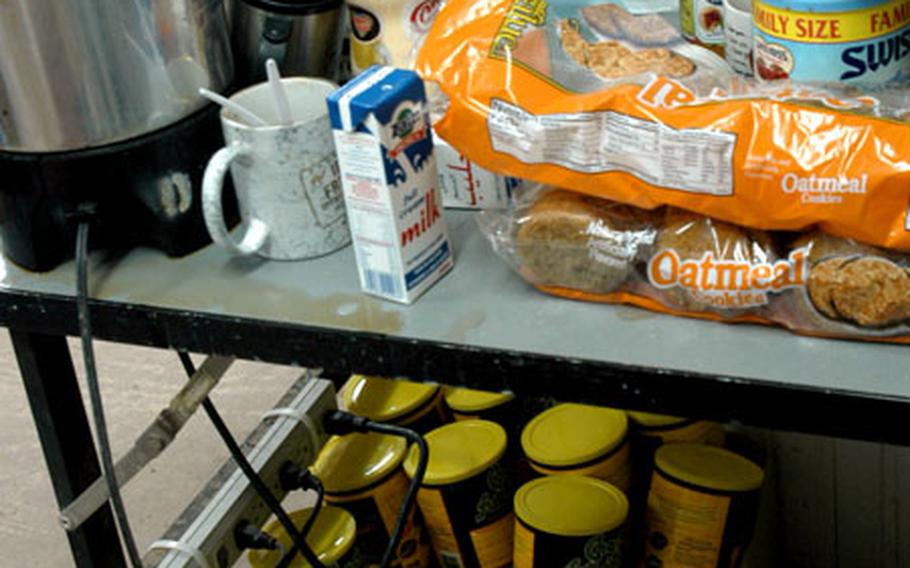 A stockpile of Chock Full O&#39; Nuts coffee sits in the headquarters office for 1st Battalion, 69th Infantry at Camp Liberty in Baghdad. The coffee came after one soldier wrote home about the soldiers&#39; office coffee fund. (Teri Weaver / S&S)

CAMP LIBERTY, Baghdad &#8212; Lt. Taysha Deaton held up what she said was the worst care package item she&#8217;d received in her eight months in the Middle East.

&#8220;What do you think this is?&#8221; the public affairs officer for the 256th Brigade Combat Team asked, holding a clear tube of what looked to be a popular name-brand hygienic lubricant.

The &#8220;gift&#8221; came in a package from a well-meaning, distant family member who didn&#8217;t quite hit the mark. Deaton, 25, from Lake Charles, La., would rather have the Fruity Pebbles and Special K breakfast bars her mother sends in bulk supply.

Care packages in wartime are heaven-sent and no soldier doubts the good intentions and generosity of people who donate. Even the most meager packages make soldiers feel a little closer to home.

Still, complaints are as much a part of war as homesickness and boredom, and some soldiers honestly &#8212; but carefully &#8212; say there&#8217;s a difference between a smart care package and one that has more good intentions than good supplies.

So, please, many say: Take it easy on the baby wipes. Ditto on the hand sanitizer. No more little bottles of shampoo swiped from hotels. Just how many tubes of toothpaste does one man need?

What soldiers need depends on where they are deployed. At the bigger camps with large post exchanges and mess halls, lip balm and shampoo are in good supply. Smaller camps, however, have little more than cigarettes, soda and Skoal for sale.

To make their wishes known, many soldiers use AnySoldier.com. The Web site lets troops say what they need or want, and anyone around the world can log in, adopt a wish list, and send a care package directly to that person.

Last week, the requests ranged from movies and magazines to feminine hygiene products.

Even when there are piles of leftovers, nothing goes to waste. Troops pack up the unneeded candy, toiletries and Beanie Babies and pass them out to Iraqi families. Some units give the surplus to Iraqi soldiers who patrol with the Americans.

But sometimes even a simple request to a close friend can get a little out of hand.

No one, however, said he or she wanted the packages to stop.