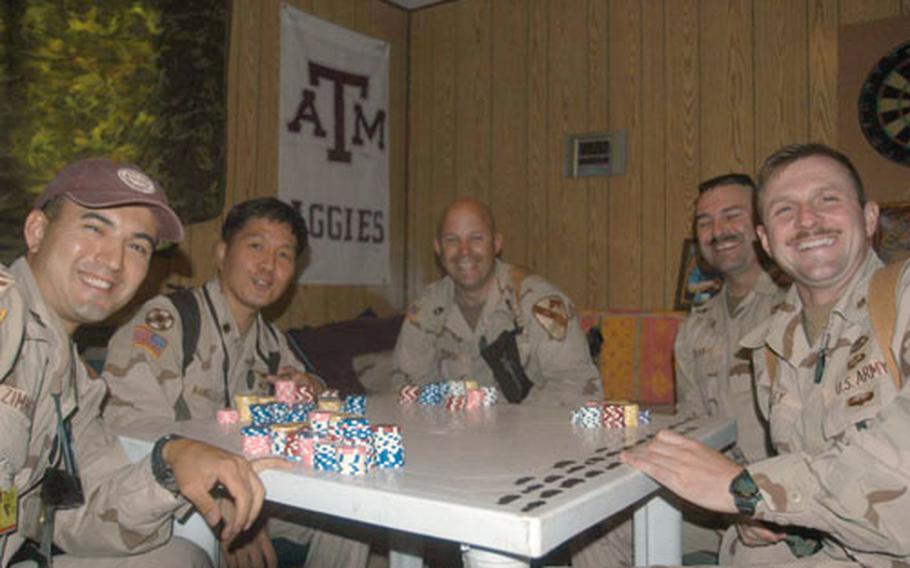 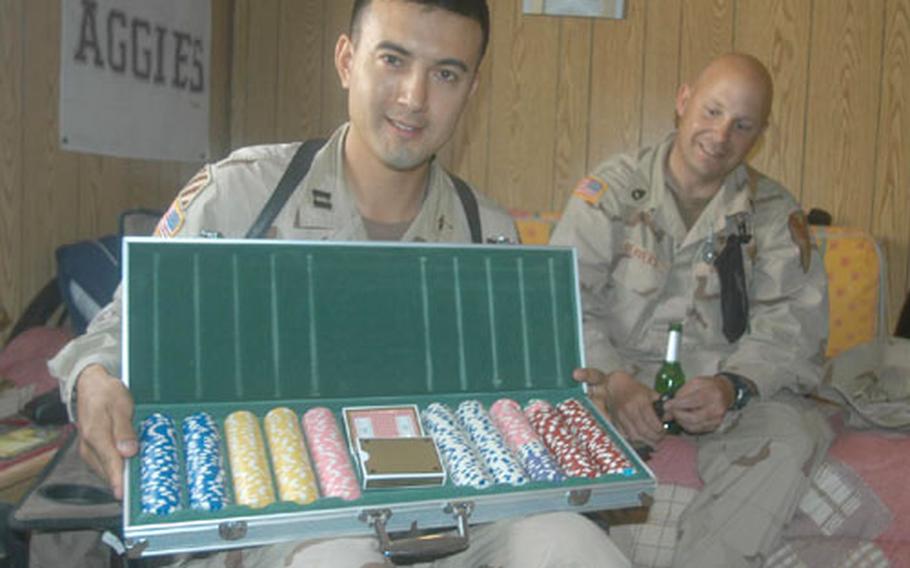 Capt. David "KGZ" Zimmerman, medical operations officer for Headquarters and Headquarters Company, 1st Cavalry Division, displays a tray of poker chips given to the troops from oldvegaschips.com. The chips were once used in a fund-raising event before they were donated to the 1st Cav soldiers. (Jessica Inigo / S&S)

These guys are aggressive. They&#8217;re ready for war. Nothing would make them feel better than some rolled-up aces over kings.

Capt. David &#8220;KGZ&#8221; Zimmerman, medical operations officer for the 1st Cavalry Division, knows all the angles. The key to no-limit is to play the man, not the cards.

When the KGZ gets in poker mode, he pulls out all the stops. He has a baseball cap pulled down low and some black wraparound shades he&#8217;ll wear in the pitch of night to ensure no one plays him.

They started playing downrange after the KGZ wrote to the World Poker Tour and some Las Vegas casinos. Simple letters got the captain 400 decks of cards donated to the troops from the MGM Grand and Aladdin casinos, five free sets of the first season of the World Poker Tour, and a box of casino chips from www.oldvegaschips.com.

Across a cheap, white plastic table, the KGZ begins to deal. Just behind the troops, scenes of Vegas and the Bellagio dance across a television screen.

If it wasn&#8217;t for the missing green felt tables and tinkling of ice cubes, the KGZ&#8217;s air-conditioned trailer could be mistaken for a casino in the middle of a different desert.

Almost forgetting the earlier banter of trash talkin&#8217;, the game starts quietly as everyone peeks at their cards. These high rollers try to make the game as real as possible when they get the chance to play. The stakes are high.

Though gambling is not authorized, per Army regulation, what these rounders win is so much better: bragging rights, the honor of being called &#8220;Johnny Chan,&#8221; a two-time World Series of Poker champion, including a framed mug of the legend to keep until the next game, and exclusion from having to buy the next round of refreshments and snacks.

Usually the medical crew plays twice a month, depending on workload, according to Maj. Jim &#8220;Diamond Jim&#8221; Kelley, chief of medical plans and operations.

Diamond Jim said when the time is finally right to get the game going, the trash talkin&#8217; begins around noon.

Quickly the banter progresses throughout the day until everyone gets off work.

The winner of the last game hosts the evening&#8217;s event in their trailer. This time&#8217;s winner is a laid-back guy named Sgt. 1st Class Steven &#8220;Sgt. Harley&#8221; Plante, the medical intelligence noncommissioned officer in charge.

He&#8217;s not a trash talker, but more of a one-liner, throwing in jabs when necessary, just to keep his competitors in check.

Sgt. Harley said the night he won several weeks ago was a typical poker night in the hooch, just struggling along, but then his luck changed and he took it all.

All but one player, Sgt. 1st Class Buddy &#8220;Die Hard&#8221; Beavers, has had the opportunity to be Johnny Chan. Die Hard, medical operation noncommissioned officer in charge, blames it on not being able to attend as many games as he would like.

The truth is, no one in the medical unit plays as much as they would like.

&#8220;There are no weekends, no hours, per se,&#8221; Diamond Jim said. He explained that in their section they work around the clock and are always on call.

With the harrowing work schedule, the Smooth Operator said from a medical standpoint it actually makes sense to play cards.

&#8220;Number one, it&#8217;s important not to be isolated, lonely, or depressed out here. By coming together we share in camaraderie,&#8221; said Smooth Operator. &#8220;Number two, in terms of an outlet for stress and other relief, playing games or cards, from a morale and welfare point of view, is very therapeutic.&#8221;

These troops work hard by helping Iraqi hospitals and clinics get back on their feet, all the while still taking care of troops.

He said all the competition actually helps the poker posse function better together as a team and keep the deployment from becoming a daily grind.

With the KGZ hunkered down in his guise, Diamond Jim with an almost constant smirk on his face, the Smooth Operator instigating trouble, Sgt. Harley soaking it all in, and Die Hard shooting for the prize, the sounds of clinking poker chips resonates into the Iraqi desert, but in this room, the dreams don&#8217;t end and the sand turns to gold.

It&#8217;s just a game that keeps one office from getting burned out when deployed.