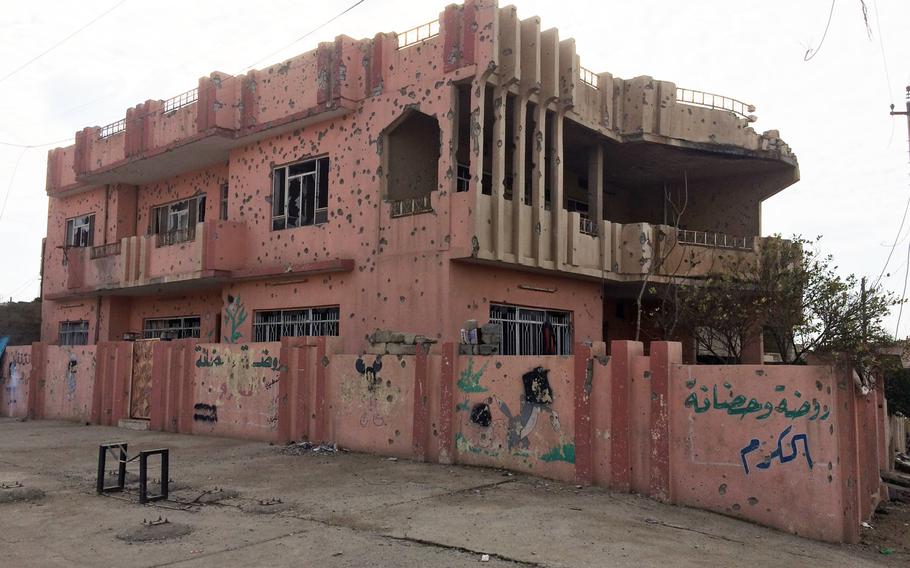 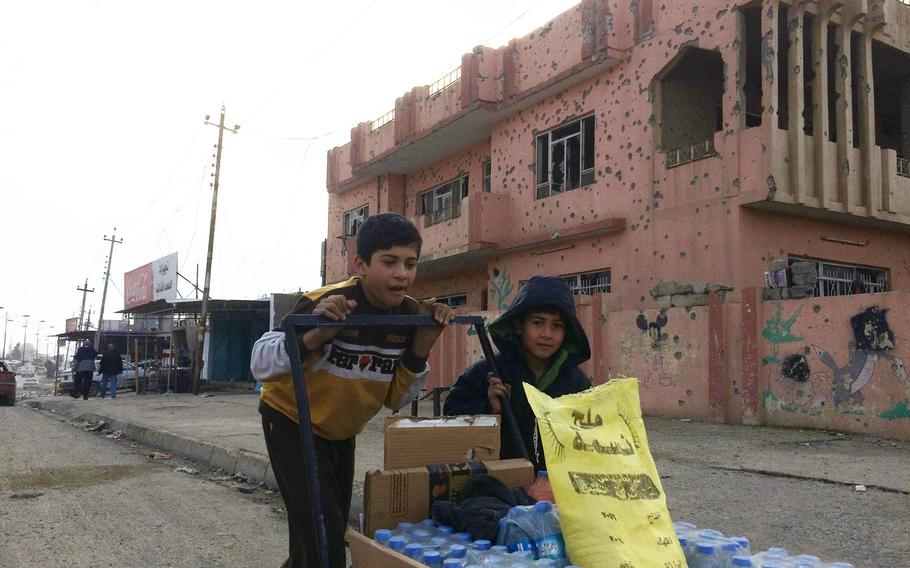 Children push a cart carrying water past a bullet-riddled schoolhouse in Mosul, Iraq, on Monday, Jan. 30, 2017. (Seth Robson/Stars and Stripes) Mosul University student Ahmed Muafaq, 27, center right, said on Monday, Jan. 30, 2017, that people in areas held by the Islamic State group should stay in their homes and await rescue by government forces. (Seth Robson/Stars and Stripes) 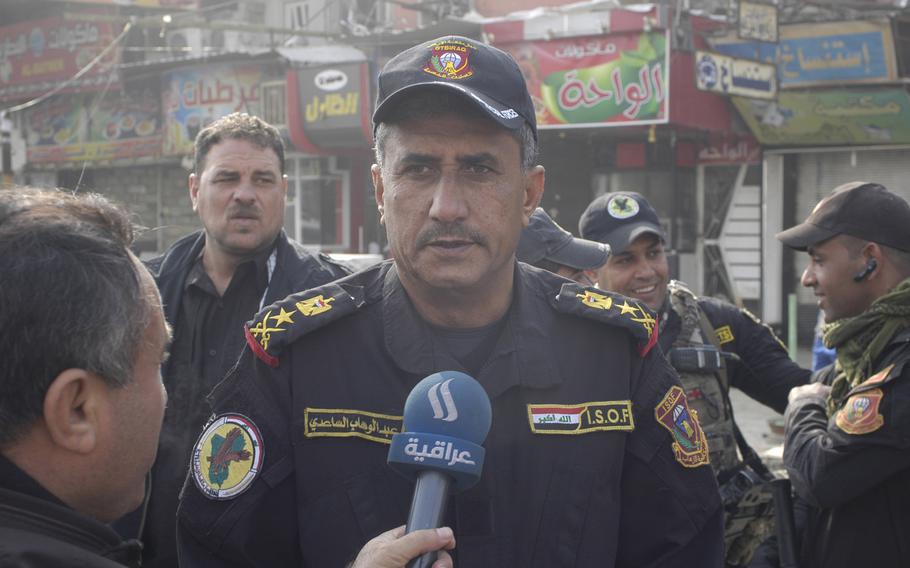 Suicide truck bombs like this one, pictured near Mosul University in late January 2017, are the biggest threat west of the Tigris River, according to Iraqi special forces commanders. (Seth Robson/Stars and Stripes) 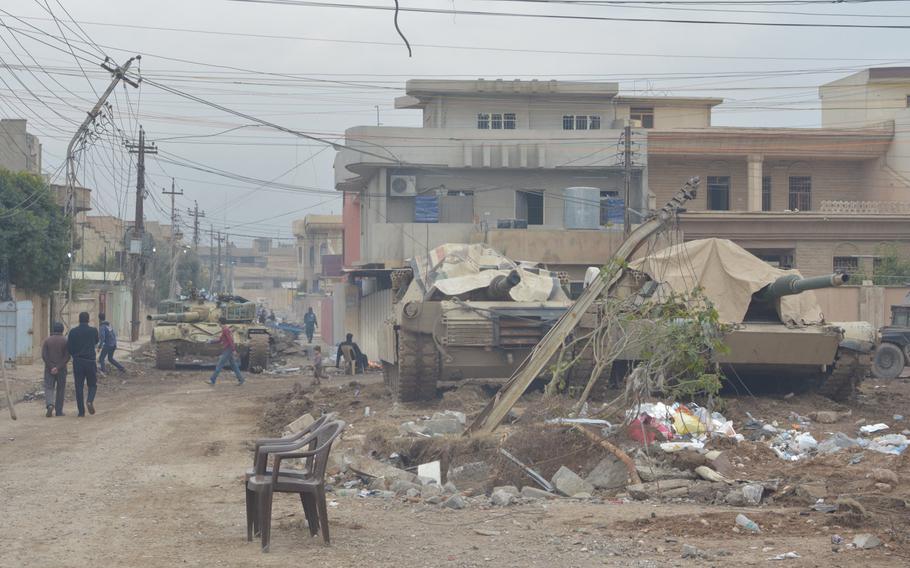 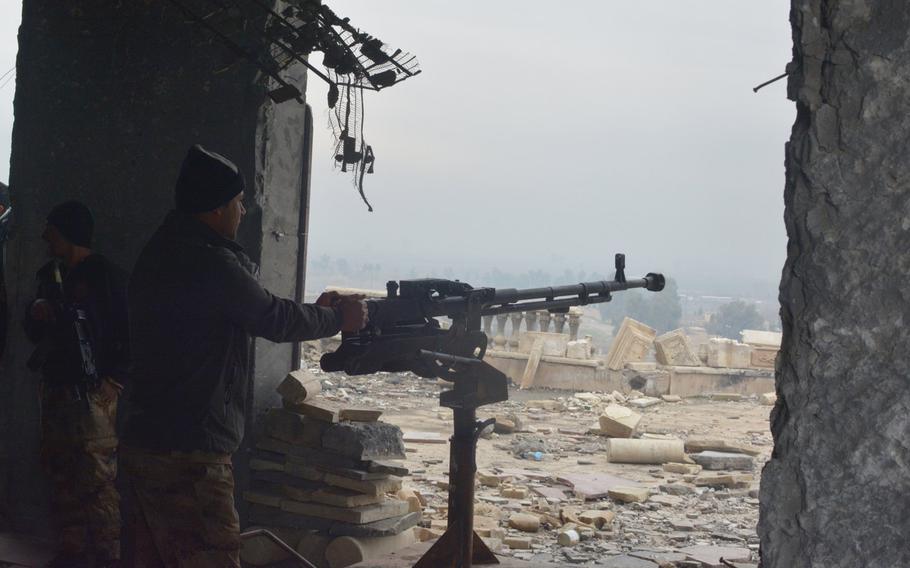 An Iraqi soldier mans a machine gun pointed toward enemy positions on the Tigris River in Mosul, Jan. 25, 2017. (Seth Robson/Stars and Stripes)

MOSUL, Iraq — Minimizing civilian casualties and neutralizing car bombs will be the toughest tasks for Iraqi troops when they restart their offensive in Mosul this month, commanders say.

Five thousand civilians and 1,600 Iraqi troops have been killed and injured freeing eastern areas of the city from the Islamic State group in an operation that 1st Infantry Division commander Maj. Gen. Joseph Martin has described as among “the hardest door-to-door fighting the world has seen in many years.”

In recent days, Iraqi special forces soldiers have paused their advance and started handing captured territory to regular army units ahead of a push into the city’s western suburbs, home to 750,000 people.

The militants still hold some of Mosul’s oldest neighborhoods, where narrow, winding streets will make it hard for tanks and armored vehicles to support ground troops.

“The car bombs are the biggest concern,” said al-Saadi, who survived the explosion of one of the weapons recently.

“There was a family who were injured. We left our own wounded and cared for them first,” he said.

Another special forces soldier in Mosul, Sgt. Maj. Ammar Alaswad, 30, of Baghdad, said he saw eight civilians, including a baby, killed by a car bomb.

“We had to take care of the survivors,” he said.

If they can’t gain access to neighborhoods with their tanks, the special forces will rely on bazookas to blow up car bombs. Heavy machine guns have also been used to destroy more lightly armored vehicles, al-Saadi said.

The government forces plan to use the same tactic they employed in the east to minimize collateral damage — telling civilians to shelter in their homes during the fighting, he said.

“It was a good plan for the civilians to stay inside on this side, so we are going to do the same in the west,” he said.

The Islamic State has destroyed many of Mosul’s ancient treasures, such as Nabi Yunus Mosque, but it’s hoped that some of the city’s heritage can be preserved when the battle moves into the older neighborhoods.

“Agatha Christie’s house is there (in the west),” al-Saadi said, in English, while sipping tea in a recaptured farmhouse near the outskirts of Mosul.

The battle-hardened commander is a fan of the famous author of whodunits such as “Murder on the Orient Express,” who came to Mosul in the 1920s and helped excavate ruins with her archeologist husband.

The enemy is running low on fuel and ammunition, al-Saadi said.

Another special forces commander in Mosul, Brig. Gen. Falah Fadhel Alobaidy, said 2,000 enemy fighters had been killed in the operation to date. There were likely less than 2,000 militants left in the city, he said.

“They have lost a lot their leaders and weapons. They are almost done,” he said.

Aerial photographs suggest that the extremists have sabotaged what’s left of five bridges over the Tigris River that had already been damaged by airstrikes.

However, al-Abaidy said his men would stage in a village south of Mosul and push north, rather than trying to cross the river inside the city.

Close to Mosul’s center, in the al-Jameela neighborhood, university student Ahmed Muafaq, 27, stood outside a restaurant Monday. The place was packed with soldiers and civilians drinking tea and eating kebabs while residents swept debris from the street outside.

Muafaq, who saw neighbors killed by a mortar during a battle in his street, said friends and family in liberated areas were in contact with people trapped in the west.

“They have no power, not water and no food,” he said. “The enemy will kill them if they see them using a cellphone. There are foreigners there and they are very dangerous.”

Civilians in enemy-held areas should be patient and stay in their homes until the fighting has ended, he said.

Muafaq had advice for Iraqi soldiers preparing to move west.

“Be friendly and don’t think that all Sunnis are bad,” he said. “I called for my Christian friends to come back here because Mosul is coming back to life.”

Zainab Olivo contributed to this report.