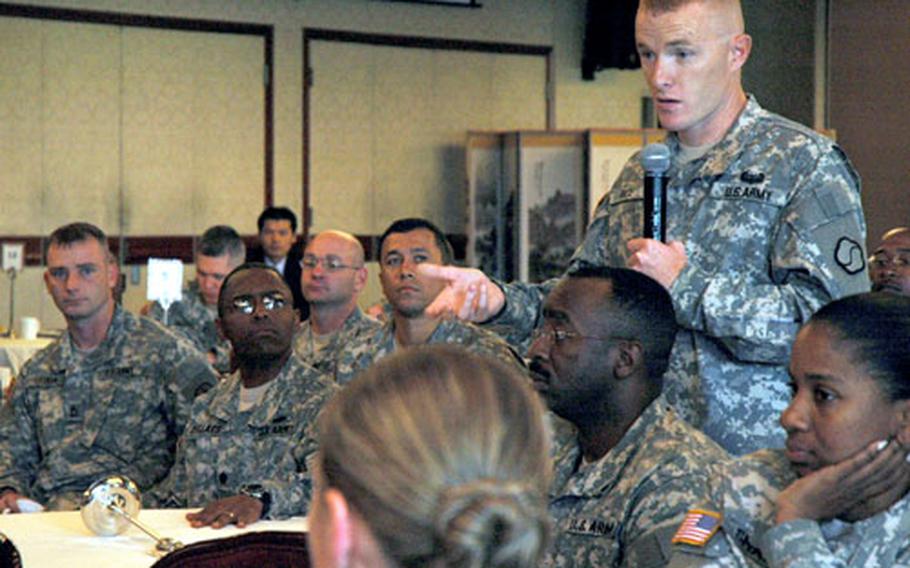 More than two dozen questions came up during the conference, which was held at Camp Walker, South Korea. (Teri Weaver / S&S)

More than two dozen questions came up during the conference, which was held at Camp Walker, South Korea. (Teri Weaver / S&S) 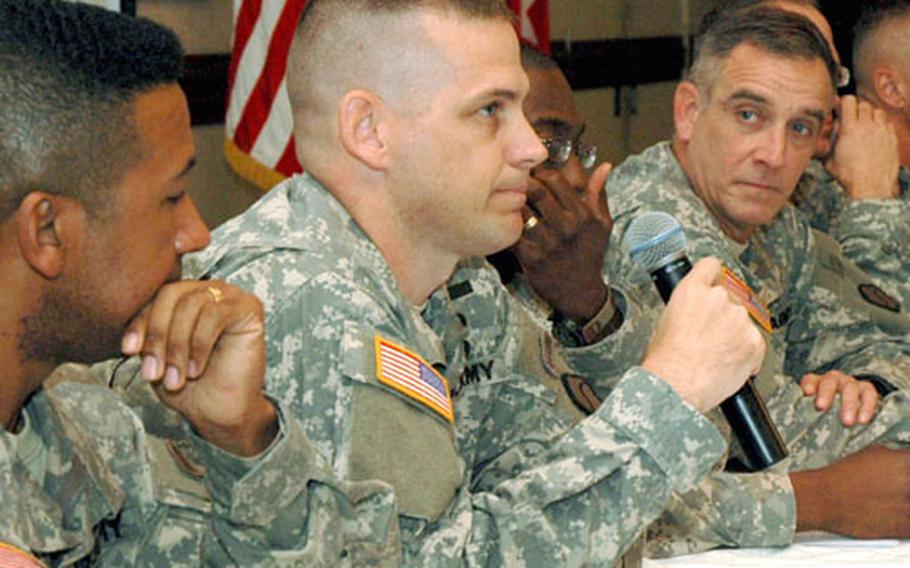 CAMP WALKER, South Korea &#8212; Captains and first sergeants run into the same challenges and problems day in and out.

Belligerent soldiers disobeying orders. Dental records lost in red tape. Helping soldiers who have barely a day to get accustomed to a new time zone and culture before they have to board trains and travel throughout South Korea.

The questions to outgoing 19th Sustainment Command (Expeditionary) commander Maj. Gen. Timothy McHale and his staff came toward the end of a two-day conference to help company captains and first sergeants better tackle the pressures of overseeing soldiers and completing their logistics mission.

The training session typically is held every 16 months. This year&#8217;s was timed so the captains and first sergeants could meet McHale and new commander Brig. Gen. Raymond V. Mason. Mason took over command of the unit Wednesday.

On Tuesday morning, participants spent two hours asking McHale and his staff about issues from soldier welfare to budgets.

Much of that information, their commanders said, is available through annual reports and the unit&#8217;s Web site. Among reasons for the conference, said Maj. William Cain, the unit&#8217;s mobility officer, &#8220;is to bring them up to speed, to break down some of the walls between communication.&#8221;

Most questions were about soldiers&#8217; welfare. Some wanted to know details about curfew restrictions, driving privileges and taxi costs for younger soldiers.

A military police captain asked whether the command could work with South Korea&#8217;s military to provide nighttime shooting training in the Daegu area.

A first sergeant new to South Korea asked about the quick turnaround at replacement units there. In Germany, he said, new soldiers spent 10 days with replacement units before being sent to their permanent stations. &#8220;You got to learn just enough German to get started,&#8221; he said.

Command officers explained that Gen. B. B. Bell, U.S. Forces Korea commander, is working to lengthen the adjustment period.

But for a unit spread throughout the peninsula such as the sustainment command, which maintains and delivers supplies throughout USFK, just lengthening the adjustment period doesn&#8217;t solve all the problems, the junior officers said.

Some told of escorting soldiers from Yongsan in Seoul to Camp Walker in Daegu, then to nearby Camp Carroll, all within their first few hours in South Korea.

The tight scheduling is meant to keep newly arrived soldiers from getting lost, but it also bounces them among bases just to sign paperwork, the captains said.