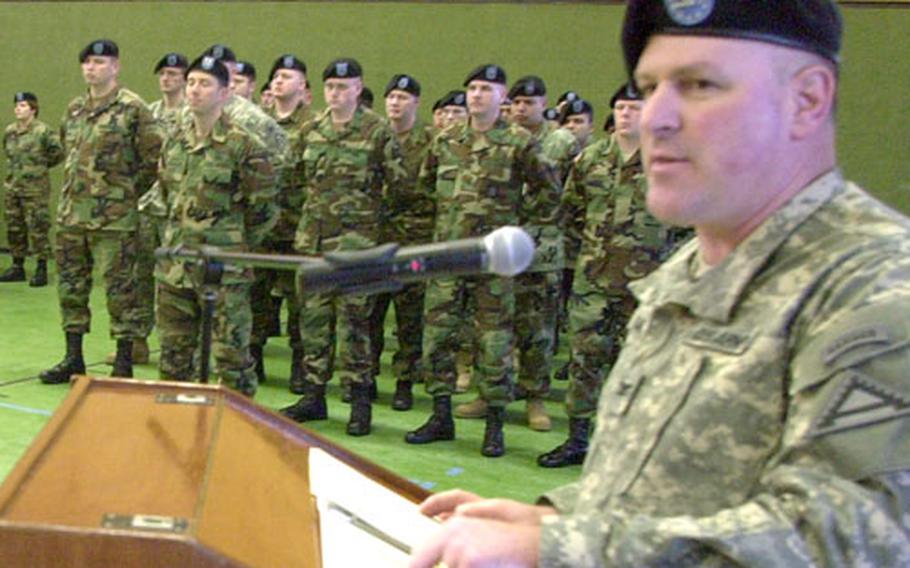 But that is exactly the sort of difficult position Capt. Larry Stratton expects to find himself in now that he has assumed command of the newly formed Headquarters Headquarters Company, Joint Multinational Training Command.

The 34-year-old Reno, Nev., native is the first commander of the unit, which was activated Monday during a ceremony at Grafenw&#246;hr.

As commander, Stratton will be responsible for ensuring all JMTC soldiers &#8212; regardless of rank &#8212; meet the Army&#8217;s administrative requirements, which might include anything from qualifying on small arms to getting a flu shot or in-processing.

The company has a number of high-ranking soldiers &#8212; including &#8220;full-bird colonels&#8221; assigned to it but who are not in command of the unit, training command spokesman Chuck Gordon said.

It&#8217;s unusual for a young captain to find himself telling higher-ranking officers what they need to do, Gordon said. So it must have been reassuring for Stratton when the chief of staff, Col. Michael Clark, lent his support at the activation ceremony.

Stratton said he was looking forward to the job, adding that he did not expect the arrival of other units at Grafenw&#246;hr to affect his unit, which will work only with soldiers assigned to the training command.

The new headquarters company has 240 soldiers assigned to it, including an eight-soldier headquarters element.

The new unit takes over administrative duties relating to the training command from the Grafenw&#246;hr Garrison Headquarters and Headquarters Company. The command has not had a headquarters company since the Installation Management Agency was formed in 2002, he said.

The garrison staff of three to four soldiers was swamped trying to handle administrative duties for the JMTC, Clark said.