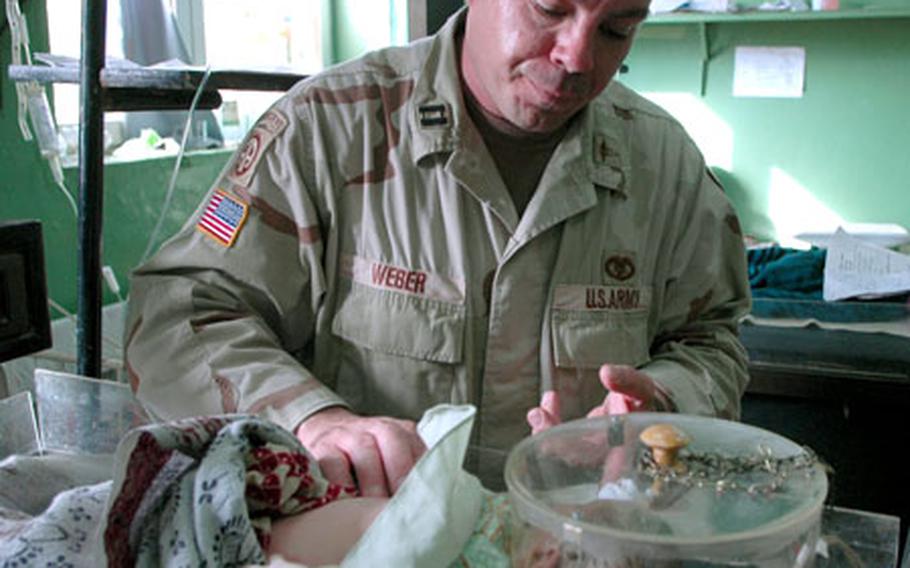 Capt. Brian Weber checks on a newborn patient at Nangarhar University Teaching Hospital in Jalalabad, Afghanistan. One of Weber’s plans as a member of the Jalalabad Provincial Reconstruction team is to provide new equipment for the ward. (Anita Powell / S&S)

Instead, Weber sticks to a more basic prescription: good sanitation, better medical education and practices, and plain old bricks and mortar. Projects range from $50,000 worth of toilets to new equipment for a neonatal intensive care unit.

Years of running his own clinic in tiny Commerce, Texas, have prepared him well for the experience, he said.

The struggle, he said, is often to convince Afghan health care providers that their two most-requested items &#8212; medicines and new equipment &#8212; will only provide a quick fix for their ailments.

Much of his efforts involve talking to local doctors and overseeing basic infrastructure products &#8212; many of them related to sewage and sanitation &#8212; at local hospitals. Better sanitation, he said, will greatly assist in alleviating the nation&#8217;s top three pediatric maladies: diarrhea, pneumonia and malaria.

At Nangarhar University Teaching Hospital in Jalalabad, where the air is filled with an indefinable, indescribable sour smell caused by desperation, crowding and not enough of anything, &#8220;there was raw sewage on the operating room floors,&#8221; Weber said.

It&#8217;s not just the facilities &#8212; several of which were built by aid groups and donor nations in the 1950s and 1960s and appear not to have been touched since &#8212; that are antiquated. Education, Weber said, is also a little behind the times.

Local officials say that the reconstruction team&#8217;s efforts have made a great difference in patient care.

Despite the request, Rahman, who graduated from the province&#8217;s medical school two years ago, agreed that the American-led reconstruction of the health care system is moving at a satisfactory pace.

&#8220;When I first came here,&#8221; said Dr. Amanullah Hamidzai, chancellor of Nangarhar University, indicating the neonatal intensive care ward, &#8220;there was water all up and down this hallway. If Capt. Weber was not here, probably we would not have half of what we have in this hospital.&#8221;

Hamidzai, an American citizen who recently returned to the university where he taught during the 1960s and 70s as a young doctor, said the Afghan health care system during that time was &#8220;completely like Europe. It was very good.&#8221;

When asked how long it would take to restore the nation&#8217;s healthcare system to modern standards, he paused and contemplated.