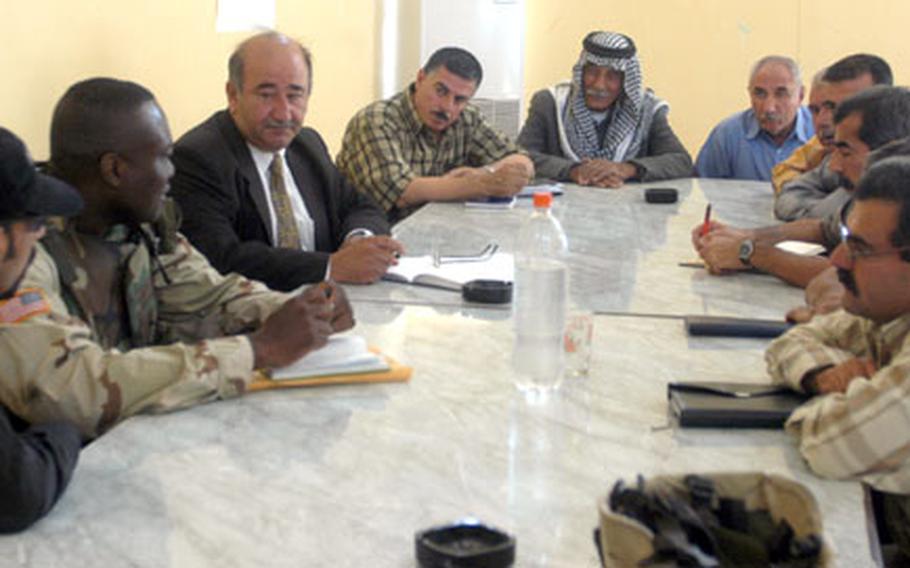 As head of the civil affairs team in Kirkuk, Iraq, Capt. Wisdom Osagiede-Ogbewekon routinely meets with local leaders throughout the region to discuss pressing issues, such as electrical power and water. On this day, Osagiede-Ogbewekon, a Nigerian prince, paid a visit to the nearby town of Laylan to meet with its leaders. (Kevin Dougherty / S&S)

As head of the civil affairs team in Kirkuk, Iraq, Capt. Wisdom Osagiede-Ogbewekon routinely meets with local leaders throughout the region to discuss pressing issues, such as electrical power and water. On this day, Osagiede-Ogbewekon, a Nigerian prince, paid a visit to the nearby town of Laylan to meet with its leaders. (Kevin Dougherty / S&S) KIRKUK, Iraq &#8212; The Army civil affairs team in this ethnically divided city has a prince of a guy heading up the operation.

Capt. Wisdom Osagiede-Ogbewekon has been described as disarming, diplomatic and down to earth. He&#8217;s also, as it turns out, a real royal, though he prefers a Kevlar helmet to a shiny crown.

His journey from the west coast of Africa to Houston, Texas, to north-central Iraq is a testament to his desire to fulfill a dream.

&#8220;Captain O,&#8221; as his supervisor, Col. Edwin Miranda, refers to him, is the ranking civil affairs officer in Kirkuk, Iraq. The team he leads works with regional leaders, helping them learn the ropes of representative government.

But what Osagiede-Ogbewekon offers most to the people of Iraq is hope.

It&#8217;s a point he says he often makes to Iraqi leaders in an effort to persuade them to embrace the U.S.-led coalition and its vision for Iraq.

His story, coupled with a humble disposition and infectious smile, has served him well, as was the case on a recent visit to Laylan, a village south of Kirkuk.

The charm the prince possesses was apparently not enough to persuade his family to let him join the Nigerian army. Osagiede-Ogbewekon said he played GI Joe as a boy and grew up wanting to serve in the military, but was crushed when his parents nixed the idea.

So he left Africa to attend college in the United States and, in time, joined the Reserve Officer Training Corps. In 1991, Osagiede-Ogbewekon, by then a naturalized citizen, became a commissioned officer in the U.S. Army.

Originally a chemical weapons officer, he shifted to civil affairs in 1998.

Nigeria has scores of tribes, but the Benin tribe that Osagiede-Ogbewekon belongs to is one of the most influential. His uncle, King Erediawa, heads a royal family that numbers over 200, so the chances of Osagiede-Ogbewekon succeeding him one day is just too remote for this prince to ponder.

All the royal family asks of him is to &#8220;maintain the name and do your royal duties,&#8221; says Osagiede-Ogbewekon, who is married and has four sons.

Miranda recalls the first time he ever spoke to the captain. It was the second half of last year when he received a phone call and could barely get a word in.

Osagiede-Ogbewekon, who speaks seven languages, believes his African roots give him a unique insight into the lives of everyday Iraqis and the various tribes. The challenges they face are similar to what he saw growing up in Nigeria.

He hopes to someday use his civil affairs skills in Africa, but for now he&#8217;s focused on Iraq as the 411th Civil Affairs Battalion nears the end of its tour.