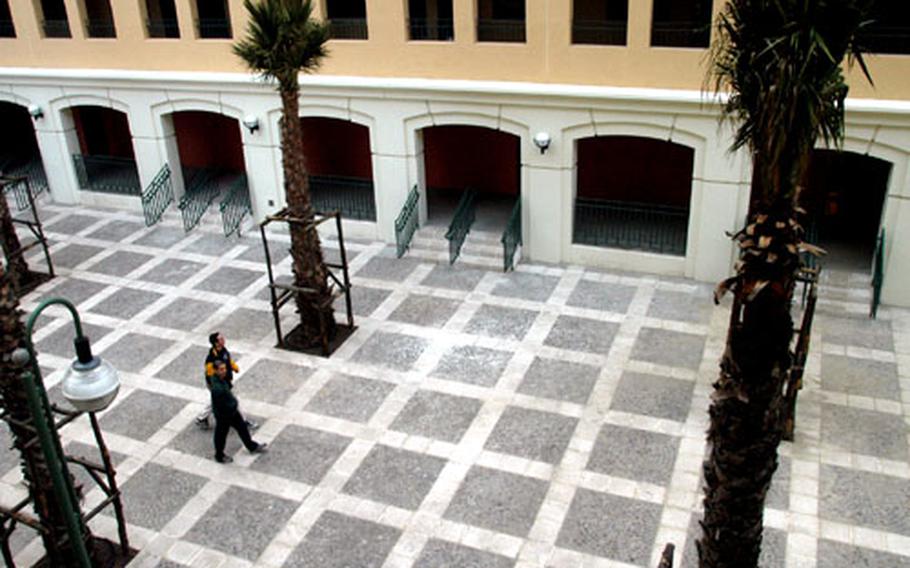 Sailors walk through the courtyard between Naval Support Activity Naples bachelor enlisted quarters 2 and 3. The barracks, shown in back, includes a single-sailor center, classrooms and room for 144 sailors. Capodichino’s newest complex for bachlor enlisted is the area’s fourth and final barracks. (Jason Chudy / S&S)

Naval Support Activity Naples Bachelor Housing manager Chief Petty Officer Gil Fogata said that the facility is the area&#8217;s fourth and final barracks. Three are on the Capodichino complex and one is used mainly by Naval Hospital Naples sailors living and working at the Gricignano housing area.

Fogata said this final barracks falls into the Navy&#8217;s &#8220;1+1&#8221; barracks standard. Under the standard, sailors have a private bedroom but share a bathroom and kitchen facility with another sailor.

All rooms will have a microwave and refrigerator. Each will also be equipped with cable TV running six channels of the American Forces Network. Residents will also be able to sign up for ADSL Internet.

Each of the four floors has a TV lounge next to the laundry room so sailors doing laundry can watch AFN as they wait.

An all-brick courtyard will soon have picnic tables and barbecue grills. Ten palm trees will provide shade from the midday sun.

The first residents will start to move into the 144-room facility in early March.

Those first residents will not be permanent. Fogata said that a few hundred sailors will move in temporarily for an upcoming exercise.

After that, sailors assigned to the NSA will move in. Sailors from other tenant commands will remain in their current rooms. Fogata said bachelor housing officials want barracks residents to be located near other sailors with whom they work.

Though some sailors will not be moving, Fogata said, they will most likely have their own rooms.

It isn&#8217;t only the final barracks, it is also the final building in the Capodichino portion of the Naples initiative. Most of the on-base buildings were a result of the $260 million project, including all three barracks and numerous administrative and support facilities.